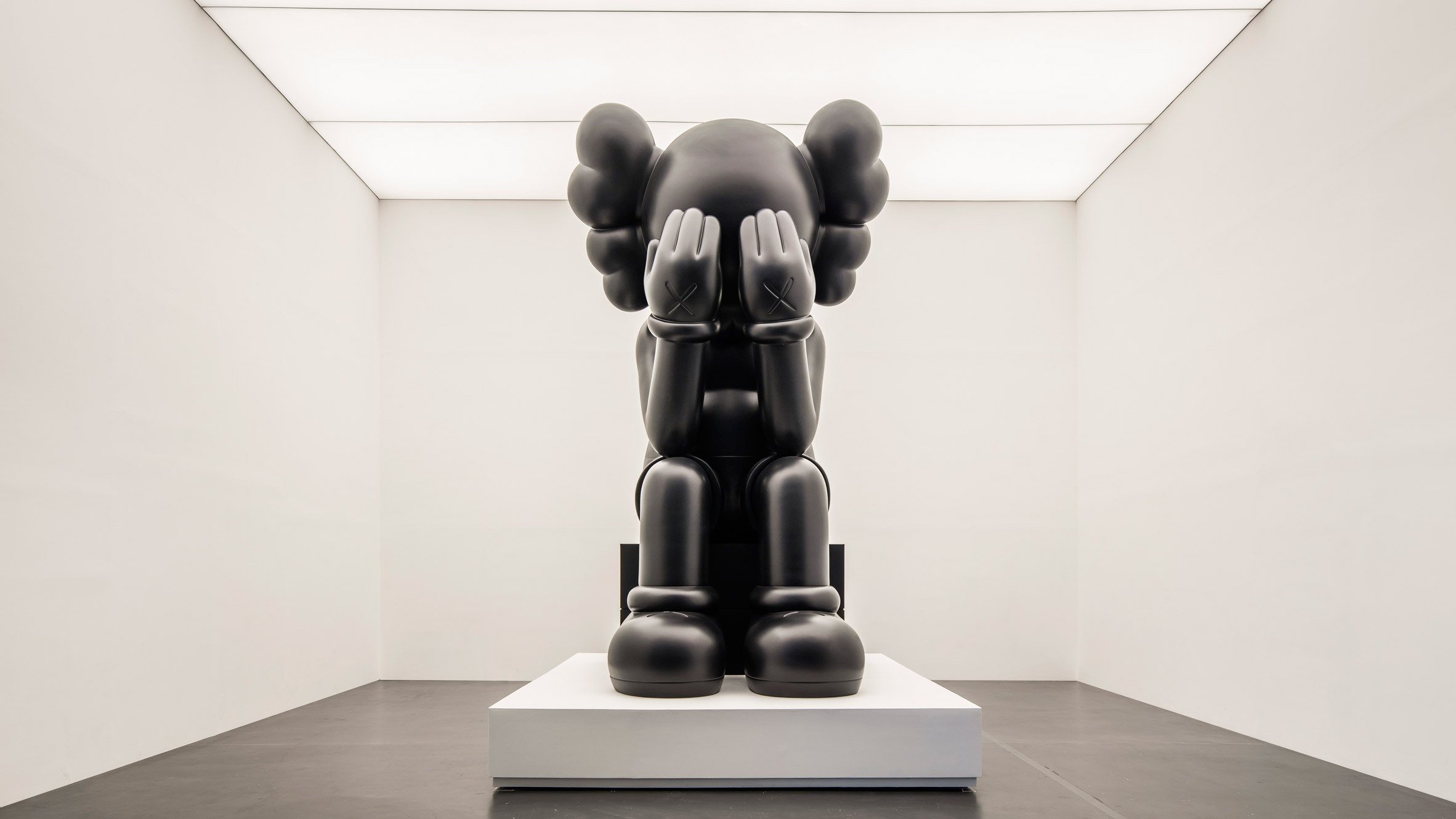 Eight-meter-tall sculptures skim the ceiling of the Yuz Museum in Shanghai, which is currently hosting the first retrospective of artist Kaws in Asia and showcasing the exhibition design by Aranda Lasch.

The New York and Arizona-based design company, founded by Benjamin Aranda and Chris Lasch in 2009, based its design around the large-scale works produced by Kaws.

“Kaws enjoys working with physical models, so we built a 15-foot-long model of the museum to familiarize ourselves with its enormous scale,” Aranda told Dezeen. “It used to be an airplane hangar and its size is quite misleading in the photographs.”

“The design engages the massive hangar space with simple but large architectural elements, a room and a wall, which serve to organize the artwork around them.”

The exhibition, titled Where the End Starts, features key paintings, sculptures, drawings and toys that the artist created over the past 20 years of his career. It’s the first time he’s had a retrospective in Asia.

The largest pieces in the exhibition are contained in the great gallery room and almost reach the ceiling, which is eight meters high.

Other smaller sculptures and paintings are scattered throughout the surrounding galleries.

“Designed as a kind of temple, the Great Hall is a space of intense concentration realized through an illuminated ceiling above the room, Passing companion“said Aranda.

“Each of the surrounding galleries showcase different aspects of his work, from black and white works to his formative graffiti works to his smaller scale collectibles,” he continued. “These are not strict divisions, but they follow intense and focused production over the years. “

Aranda and Lasch founded their eponymous studio in 2009. Other company projects include a foam pyramid seating installation, shown at the Venice Architecture Biennale 2010, and a temporary pavilion designed for the Design Miami collectors.

Kaws: Where the End Starts is on display at the Yuz Museum in Shanghai until August 13. 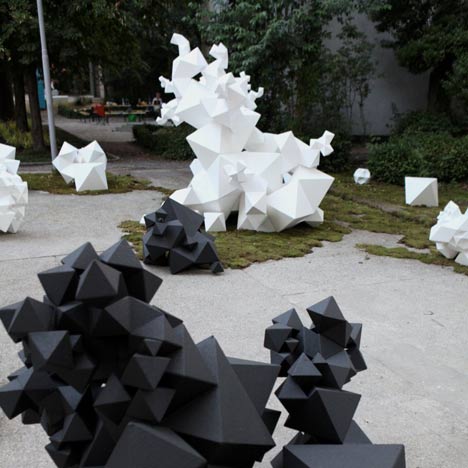 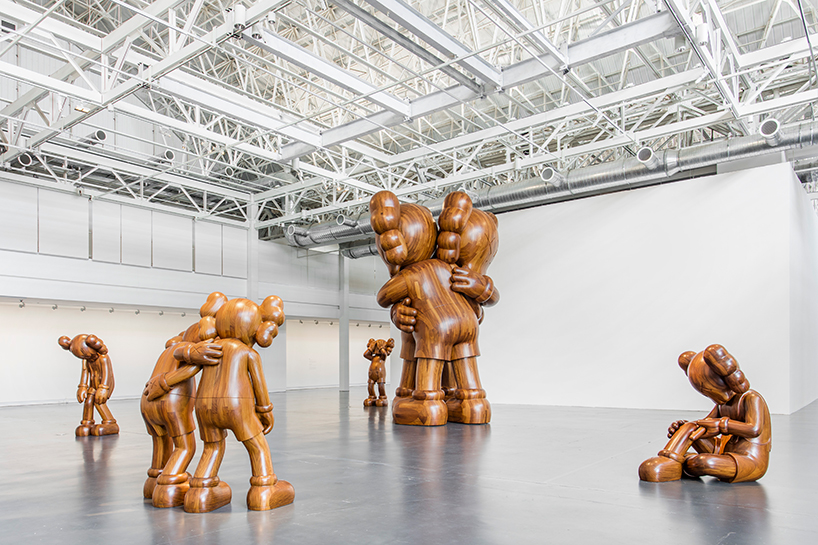 aranda lasch designs the scenography for the monumental exhibition KAWS

From now until August 13, the Yuz Museum in Shanghai is hosting a monumental exhibition of the work of Brooklyn-based artist KAWS. inside the institution’s expansive interior, the design of the exhibition was conceived by the new york design firm and toscon aranda lasch to host large and small-scale sculptures, as well as a series of paintings. thinking of the site – a former hangar – benjamin aranda and chris lasch sought to engage the massive scale of the museum through simple but significant architectural elements that serve to organize the work of art around them.

working closely with KAWS and curators of the yuz museum and the modern fort value, aranda lasch envisioned the exhibit as a site for both monumental exhibit and intimate worship. the main exhibition area was designed as a kind of temple – a space of intense concentration. in a room carved out of the main space, an ethereal sensibility is achieved through an illuminated ceiling placed above a unique large-scale sculpture titled ‘Companion Passing Through’. around the ‘temple’ is a room filled with wood carvings and a monolithic wall that displays ‘chum’. 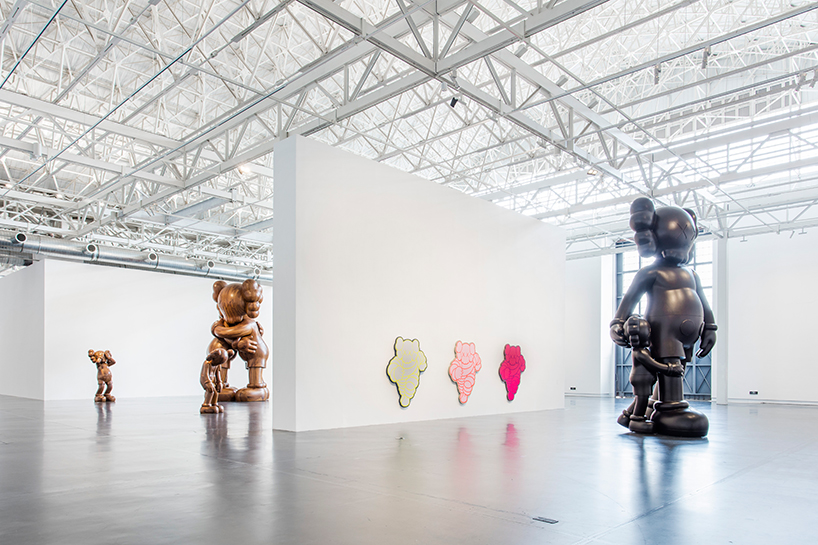 the great room with ‘at this hour’, ‘little lie’, ‘together’, ‘boyfriend’ and ‘good intentions’

In addition to the exhibition of monumental sculptures, the exhibition also offers a comprehensive overview of the multifaceted work of KAWS through a range of media. featured in the surrounding galleries – each offering a different take on KAWS ‘work – are black and white pieces, his formative graffiti works, and smaller scale collectibles. “KAWS: Where the End Begins” engages visitors through the exhibition of numerous large-scale works and painted pieces, offering a new perspective on the artist’s practice and a powerful presentation to her Chinese audience. 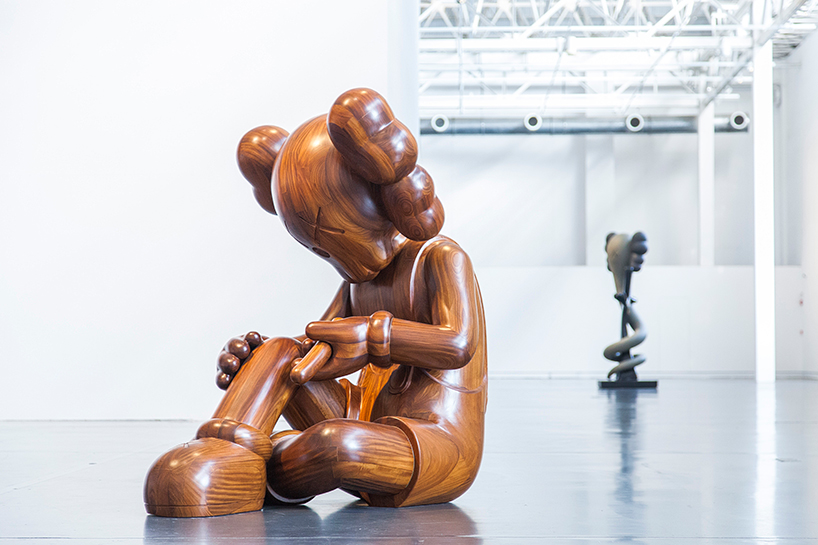 “Better know”, with “born to fold” in the background 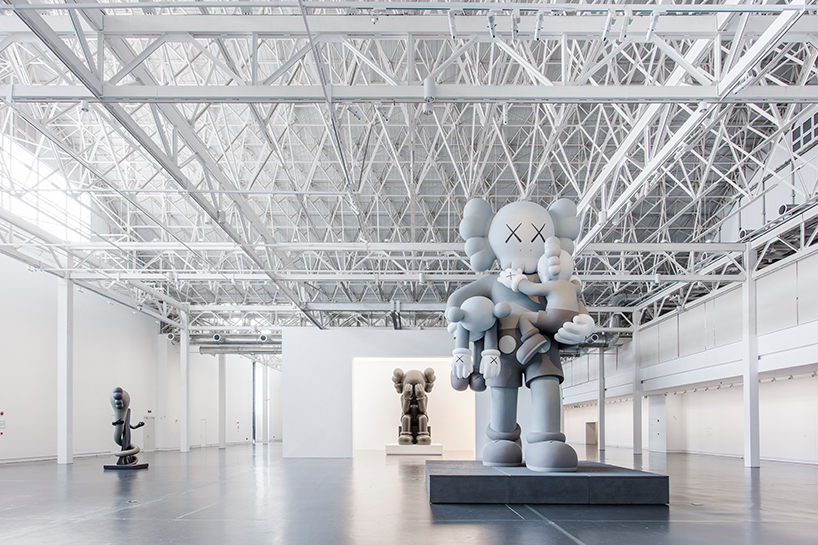 the great room with “born to fold”, “passing companion” and “clean board” 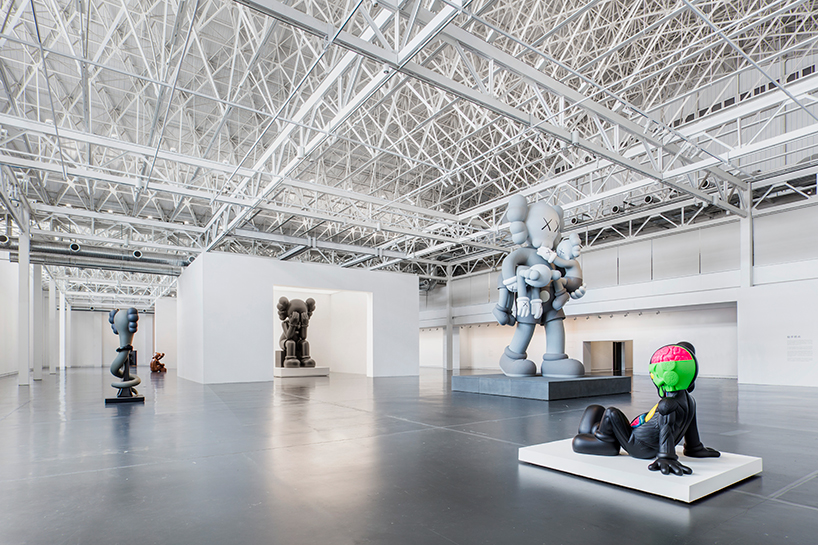 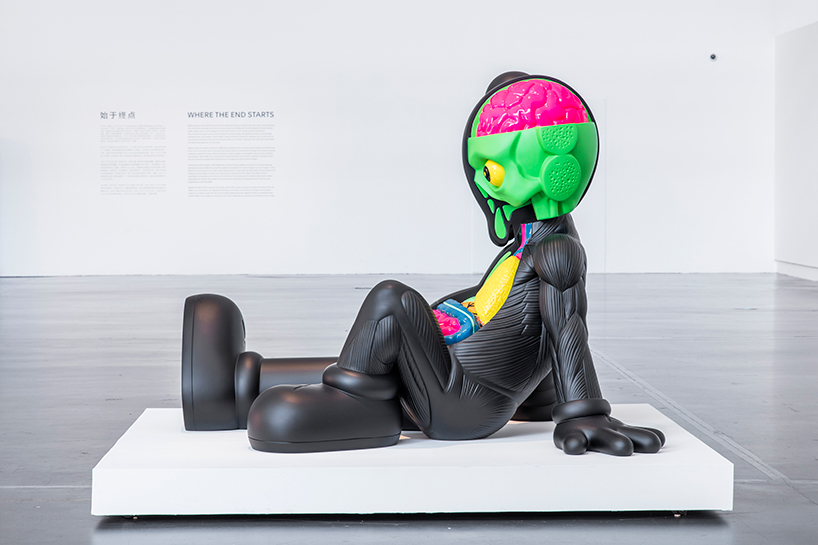 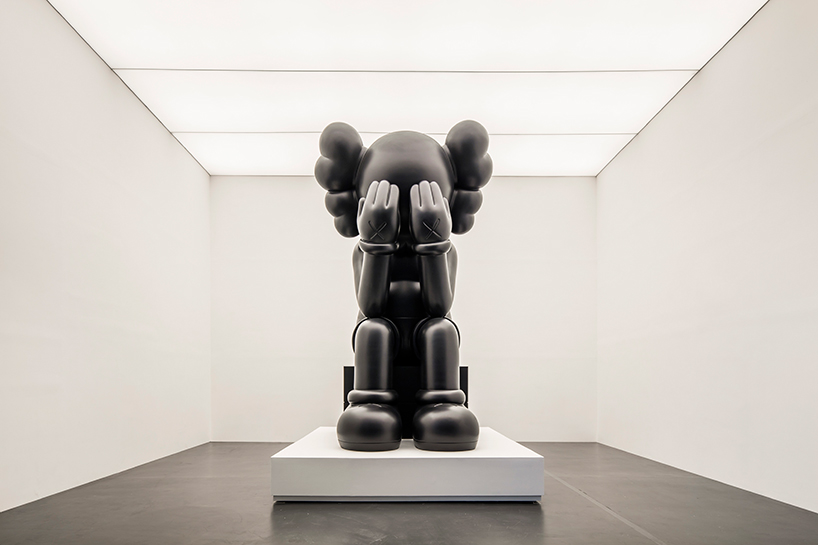 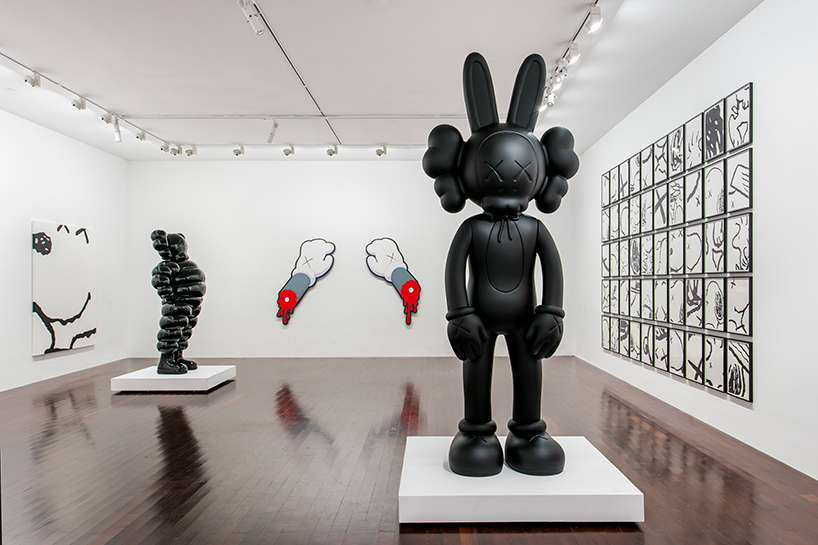 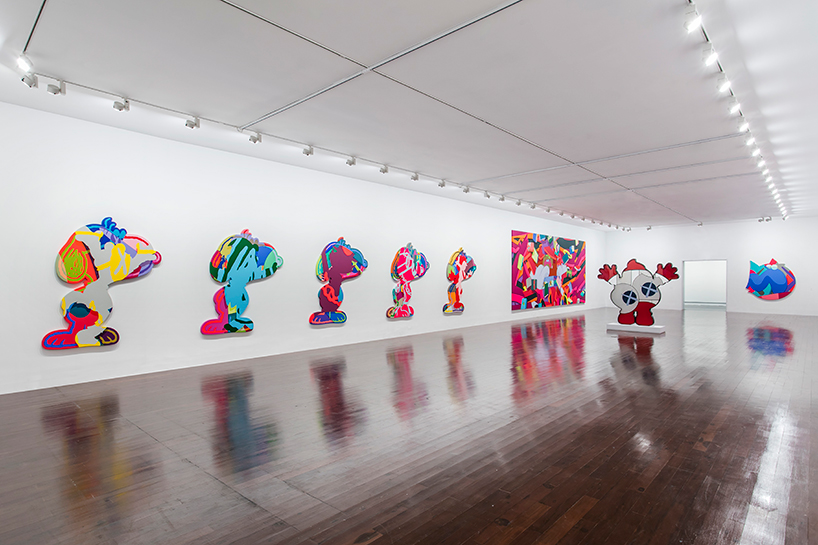 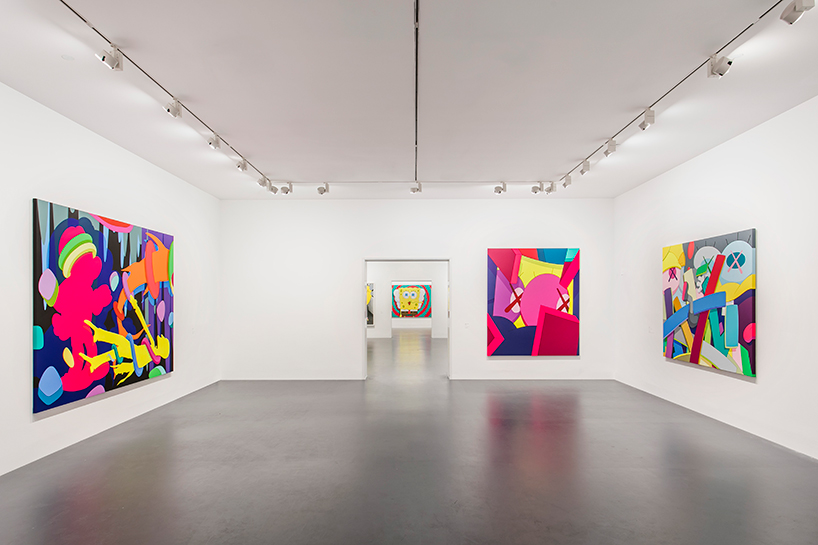 gallery rooms at KAWS: where the end begins 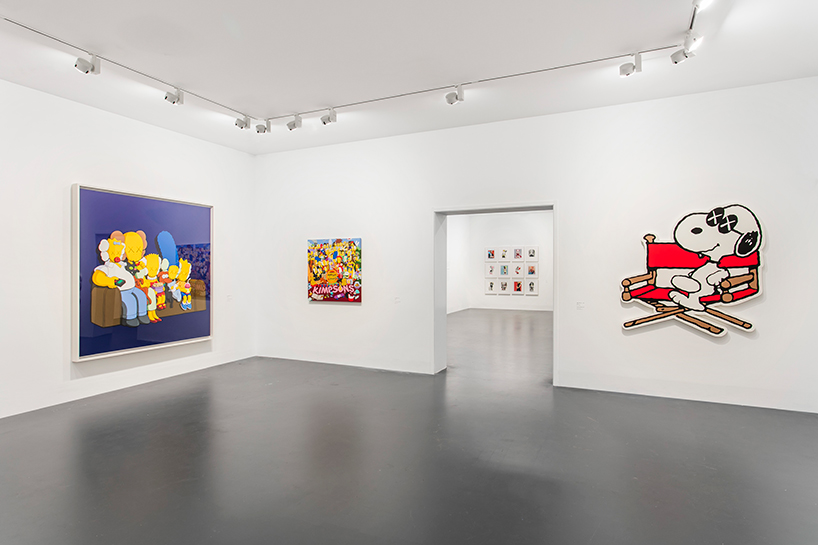 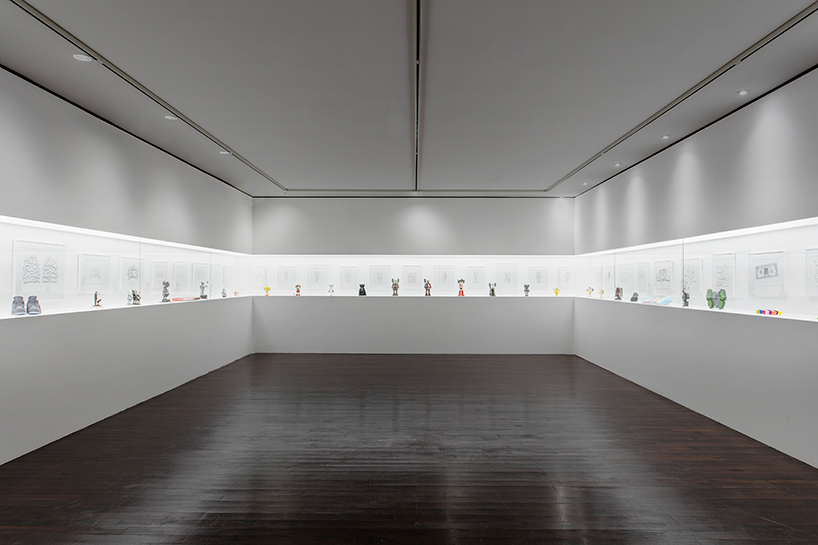