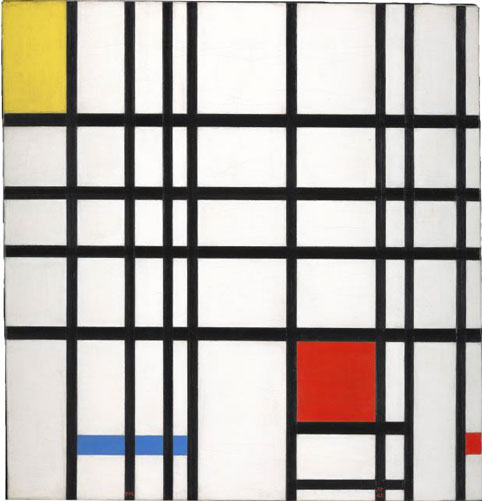 Adventures of the Black Square: Abstract Art and Society 1915 – 2015 presents the development of abstraction, divided into four subsections and displayed in chronological order.

The exhibition begins with Kazimir Malevich’s painting “black square” (Black and White. Suprematist Composition, 1915), which is used as a thematic starting point to explain how abstraction articulated ideas about politics and society, explains Sophie McKinlay, Exhibitions Manager at Whitechapel. Gallery.

“Beginning with the hand-painted rendering of a black square, viewers are taken on a journey that shows how the language of abstraction has been used around the world,” she says.

“Malevich’s black square made people think about figurative art in a much more important way,” says McKinlay. “It allowed artists to develop a new language about the world. The image had to be created by someone, because it didn’t already exist in nature – it was a radical approach.

The four subsections of work include Utopia, illustrating the visions and dreams that Malevich and his colleagues had after the creation of the Black Square, Architectonics, examining the architectural realization of these ambitions, Communication, showing how these ideas were translated to worldwide. through magazines and other media, and The Everyday, exploring how ideas have become part of what we experience in our daily lives.

“The Communication section shows the global exhibition site of experimentation and shows how artists used typography and the language of abstraction to form the layout of magazines in a strident graphic style,” says McKinlay, who organized the exhibition magazines.

She adds, “The ideas were at the heart of the artwork, and then were disseminated by magazines, which promoted them and made them available to the general public.”

The magazines used were borrowed from the Archivo Lafuente – one of the largest collections of avant-garde magazines in the world – in Santander, Spain.

The exhibition is accompanied by an illustrated catalog of essays by curators, including: Gallery Director Iwona Blazwick OBE and General Curator Magnus af Petersens, with assistance from Sophie McKinlay, Assistant Curator Candy Stobbs and an advisory committee of four other people.

An unpretentious storefront. A major museum. A collaboration that brings museum art to the people of Los Angeles