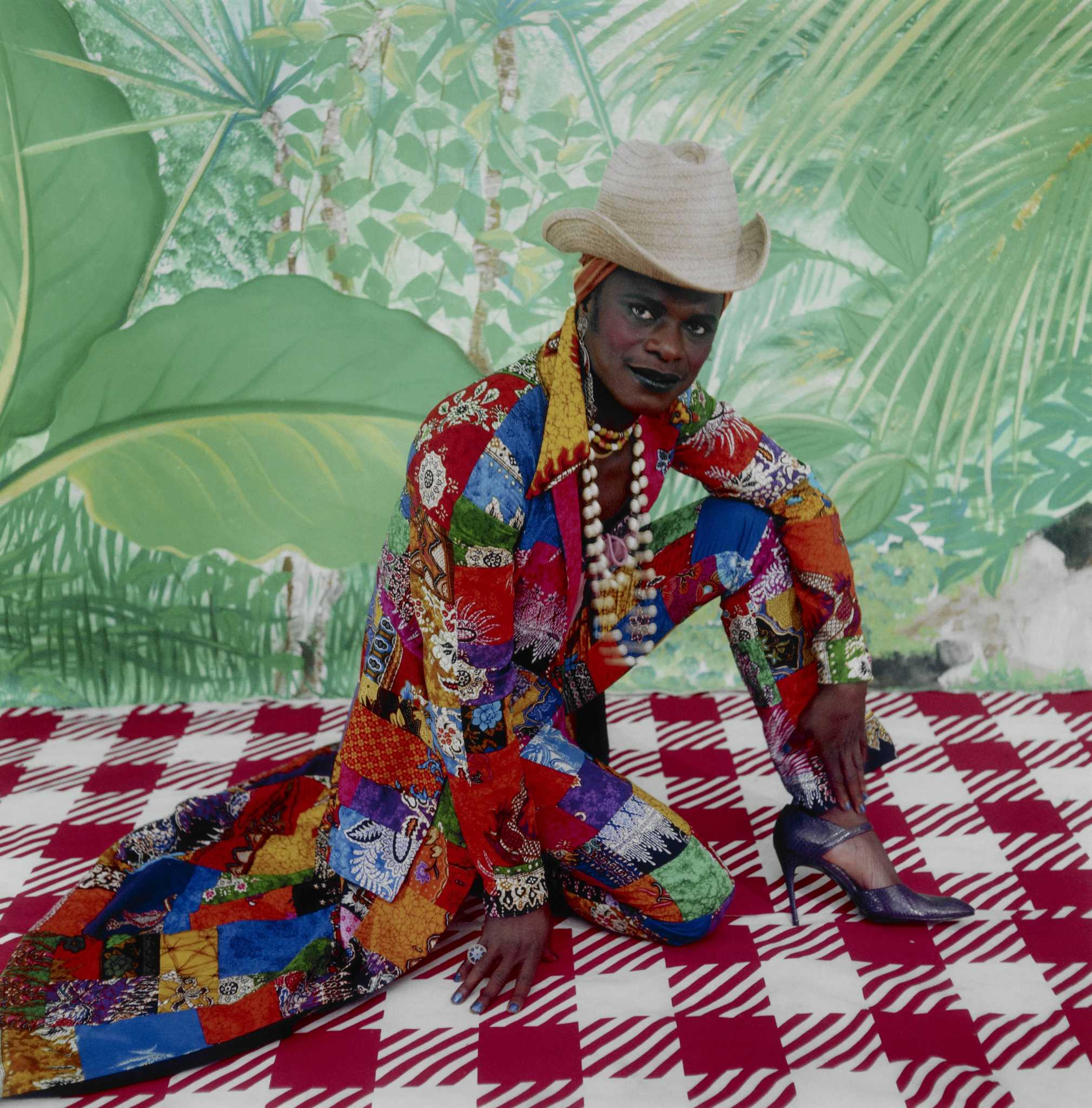 Clearly, the visual arts reward those who are able to see works in person, as opposed to those who do their best with books – or, worse, the types of thumbnail images prevalent online. But the two pieces that create a gateway to â€œAfro-Atlantic Histories,â€ a new exhibit at the Museum of Fine Arts in Houston, underscore the need to come together, and both also caught my eye online: â€œOs lui tourosâ€ (The Two Bulls), a tapestry from 300 years ago, and â€œÃ‰ramos as cinzas e agora somos o fogoâ€ (We were the ashes and now we are fire) by Brazilian artist Maxwell Alexandre, from 2018.

Familiar with digital versions of images, I was nevertheless not prepared for the scope and scale of these two works, which do not weigh so much on the viewer as they invite slow and spatial contemplation. Each slows down time, prompting the viewer to stop for a moment before entering this challenging and wonderful exhibition that spans centuries of art depicting the African Diaspora resulting from the slave trade in North and South America. Both of these pieces are brimming with small visual details that feed into a larger whole. They would look imposing without the fact that they are so inviting. For two works of such a large size, both alert visitors that certain smaller details carry significant weight.

Throughout this exhibition, small touches attract attention. Alexander’s work includes 16 connected panels that depict various black experiences spanning a territory ranging from spiritual expression and solitary comfort to oppression and public unrest. Towards the end of the exhibition, Barkley L. Hendricks’ “George Jules Taylor”, a 1972 painting, offers a striking portrait with attention to smallness even when the canvas is imposing.

Hendricks’ very large painting captures his subject barefoot and clad in a cape, his feet suggesting a dance movement. The luminous oil figure is contrasted with a flat acrylic background, giving the piece a shine when the light is on.

â€œAfro-Atlantic Historiesâ€ has taken a fascinating path to Houston. The exhibition has its roots in an exhibition three years ago at the Museu de Arte in SÃ£o Paulo, Brazil. Curator Adriano Pedrosa has selected more than 450 works from two galleries. Kanitra Fletcher of the MFAH attempted to take the show’s spirit of Pedrosa and reinvent it for Houston, where it is making its first North American appearance.

Pedrosa’s exhibit goes through â€œAfro-Atlantic Historiest,â€ but the exhibit has been modified to appeal to a more selectively regional audience. Fletcher worked with Pedrosa and MFAH Curator Alison de Lima Greene on “Afro-Atlantic Histories” before accepting a new job in Washington, DC, as Senior Curator of African-American and African-American Art. diasporic at the National Gallery. The exhibition will travel to the National Gallery next year after it closes here.

When: From Wednesday to Sunday until January 17

From cards to portraits

The arrangement of “Afro-Atlantic Histories” is brilliant for the way it skips the timeline in favor of the theme. â€œMaps and Marginsâ€ introduces visitors to the exhibition.

Pedrosa created a large-scale exhibition in Brazil to capture the extent of the slave trade on the culture of the Americas. For its North American tour, the exhibition remains linked to its origin while refocusing on this continent. A close connection between the two exhibitions is the use of “histÃ³rias”, a Portuguese term which, according to Pedrosa, does not have a clear English translation. â€œIt encompasses fiction and non-fiction,â€ he says. â€œIt can be personal or political, historical or fictional, micro or macro. “

Fletcher was involved in transferring this concept to a North American audience. “We wanted to redesign it for audiences in Houston but also across North America,” says Fletcher, “representing artists who bring different perspectives to a long history.”

Fletcher highlights â€œPlan and Sections of a Slave Shipâ€ by James Phillips Cornwall, a cold, clinical drawing of a ship’s interior space that would be a motif throughout many works from start to finish of the exhibition. A self-portrait photograph of Nona Faustina places the nude artist on a block of wood to piece together auctions that took place in New York City centuries ago. Among the points that the photographer wishes to convey: The North was, at least for a time, as complicit as the South in the slave trade.

Gary Tinterow, director of the MFAH, describes the exhibition’s journey as â€œpainful but enlighteningâ€.

Fletcher calls the “Maps and Margins” section “fundamental,” but even then, this part of the gallery isn’t simply presented as the start of a timeline. â€œScourged Backâ€, a photograph from the 1830s, serves as a point of reference, a germ: the tiny image is majestically manifested in works that will be produced more than a century later via photography or sculpture manipulated like Gordon â€ , a vacuum-formed plastic piece by Arthur Jafa that reproduces the subject’s protruding triangular arm in a piece that decrypts the three-dimensional wounds of the flogging. The progression along this wall creates a devastating atmosphere. A small but striking 1980s sculpture by Houston-based Melvin Edwards, “Palmares”, also feeds into the theme, its twisted pieces of metal reminiscent of the scars marked by hatching on the back of the man identified only as “Gordon” .

A collection of portraits representing blacks from different countries at different times constitutes the last gallery of the exhibition.

He pulls a thread that connects various regional panels sewn together: various nations across the Americas. “Afro-Atlantic Histories” certainly aims to showcase various ways in which African cultures were taken from their native land and sunk into a faraway place, where they served for later purposes – comfort, rebellion, celebration – as they were absorbed into other cultures. The exhibition is full of what Fletcher calls â€œechoesâ€ – small elements that cross time and national borders to resonate the same in very different contexts. â€œThere are elements that connect the pieces throughout,â€ she says.

In this way, the exhibit makes two great land masses separated by the equator (and many Caribbean islands as well) feel interconnected by a macabre trade that – over the centuries – has changed Western cultures in inestimable ways.

The painting “Skylark” particularly caught my attention as I worked through this exhibition. The hopeful explosions of color applied through the centuries were certainly touching. But “Skylark” is a strangely haunting work. Lynette Yiadom-Boakye’s play features a black man, his neck surrounded by a feathered collar. Painting stands out among his business, which often sports splashes of bright color. â€œSkylarkâ€ works with brown in the same way that Rothko Chapel canvases work with purple: the colors blend into something that looks like black, then reappear depending on the light. The figure in the painting is surrounded by ostentatious decor but framed with such sobriety that its glamor requires careful attention and perfect light.

Two small strokes of white paint break up the dark tone of the paint, each representing the stark white sclera of the character’s eyes.

Here, the celebration of blackness or brown requires a long, hard look. The whiteness of the eyes is imposing but also a distraction – as if Yiadom-Boakye asks the viewer to come closer to see the variety of shades in the painting. Observe what has been too often invisible.