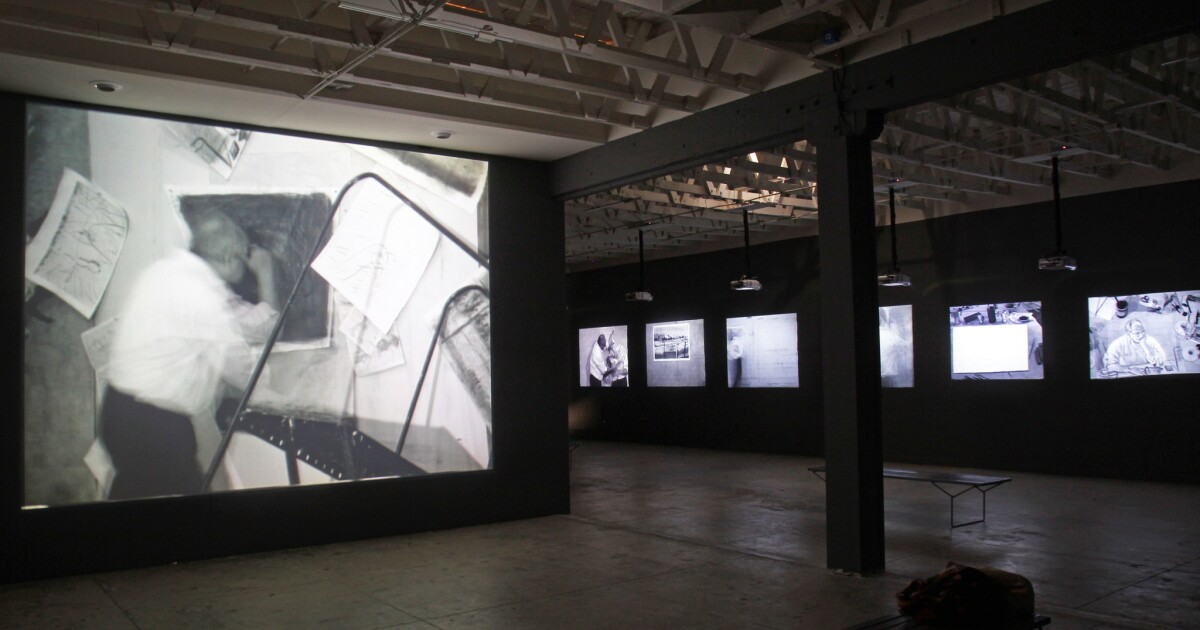 An unpretentious storefront. A major museum. A collaboration that brings museum art to the people of Los Angeles

Watching the video installation “7 Fragments for George Méliès” by William Kentridge is like watching a band of ghosts play with the materials of art. In this series of seven videos, the ink flows backwards. Torn pieces of paper levitate and reassemble. The drawings come to life as if by magic.

The piece is on display in Los Angeles, but it cannot be found in any museum.

Instead, for the past three weeks, “7 Fragments” has been quietly screened inside a low-slung storefront on Washington Boulevard in Arlington Heights, down the block from a tattoo parlor and… a liquor store. Alongside it, two complementary videos by Kentridge are also part of MOCA’s permanent collection.

The installation is part of an innovative new collaboration between the underground museum, the alternative art space founded by painter Noah Davis, and the Museum of Contemporary Art. Over the next three years, Metro will feature a series of exhibitions, curated by Davis, that will be drawn from MOCA’s permanent collection – placing significant works of art in a largely working-class Black and Latino neighborhood at the heart of Los Angeles.

“Noah said it was his big dream to have the underground museum have museum-quality work,” said MOCA’s chief curator, Helen Molesworth. “I had thought about wanting to do things with artists, for the museum to do things that the artists couldn’t do themselves, that they needed resources or expertise that we could bring to the situation.

Founded in part by artists, the MOCA has long called itself an “artist’s museum”. And Molesworth, who joined MOCA late last year, says Davis articulated her idea – to show museum-quality work at the Underground Museum – just when she was thinking about what it meant to be a ” artists’ museum.

She launched the idea of ​​a collaboration to the director of MOCA, Philippe Vergne, who immediately supported her. “Philippe and I are very convinced that if you follow the artists, you will be in the right place”, she says. “That’s what it means to be an artists’ museum.”

For Davis, the project comes at a delicate time. The artist is seriously ill with a rare cancer. (He was therefore unavailable to be interviewed.) But he mapped out a roadmap for future projects with Molesworth, as well as his brother, videographer Kahlil Joseph, who has the facility. “Double Consciousness” to see at MOCA.

Joseph is a regular presence at the Underground Museum. He does video production work in a back office. And, in fact, it was at the museum that Molesworth first saw his Kendrick Lamar-inspired video, “mAAd.”

Joseph says his brother’s artistic instincts go far beyond what you might see in his paintings. “Noah’s imagination, his vision, his appetite – it’s huge,” he says. “People see him as this black figurative painter and this black abstract painter. But it’s as if he was so much more than that.

The underground museum has not only been a space for Davis to create and show art, but something that is a work of art itself – a place to create crackling dialogues between his work and that of other prominent artists, as well as the surrounding neighborhood.

“We are not a gallery,” says Joseph. “Nothing is for sale. It’s not a museum, which can be alienating. It’s just very honest. The rigor is real.

“What [Helen] understood, he adds, is that the Underground Museum is [Noah’s] masterpiece.”

Davis, 32, born in Seattle, is an accomplished painter. He is well known for producing tension-filled figurative scenes that often seem to slip into unreality. His paintings are in the collections of the Nasher Museum in North Carolina, the Rubell Family Collection in Miami and the Workshop Museum in Harlem.

The Underground Museum represents another lesser-known facet of his artistic practice.

In 2012, he took over several connected storefronts on Washington Boulevard — spaces that once served as a pupusería and storefront church — knocking down walls, building a back garden, and creating a community library filled with art books and of vinyl records.

“At the start of the Underground, people were like, ‘What are you doing?’ “recalls Joseph. “Why are you spending your money on this? “Everyone was asking [Noah] what was the point. Even I was scratching my head. He operated purely on instinct.

But in this space, Davis proceeded to curate a series of exhibits that captured the attention of critics and museum curators for their sophistication and panoramic view of history.

In 2013, he created an installation entitled “The Imitation of Wealth” in which he recreated works by top notch artists, including a bottle rack by Marcel Duchamp and a vacuum cleaner part by Jeff Koons. The impetus was to exhibit valuable cultural artifacts in an unlikely location.

“I bought a vintage Hoover vacuum on Craigslist for $70 that matched the design of the Jeff Koons exactly,” Davis said. Art in America. “At that time, there had been a series of exhibitions in New York and Los Angeles that were based on the principle of destroying the large high-end galleries and creating haunts of crack or whatever…I liked the idea of ​​bringing a high-end gallery to a place that doesn’t have cultural outlets within walking distance.”

Last year, he continued with an exhibition entitled “The Oracle,” an exhibition bringing together a range of contemporary and historical works: sculptures by eminent Henry Taylor19th century sculptures from Sudan, totemic ceramics from Ruby Neriand Joseph’s “mAd” video, an extraordinary multi-channel rumination on the real and the imagined in the city of Compton.

In his review of the show, Catherine Wagley, LA Weekly critic described it as an exhibit that made connections “between old rituals to avoid bad energy and new ones”, while generating an accessibility that is “often what is missing in conversations about art”.

“We are still feeling the effects of that show,” says Joseph. “That’s where the ‘mAAd’ piece was that went to MOCA. That’s how Noah met Helen. And that’s when [MOCA] started to understand what the Underground was.

“Noah has an enviable curatorial sensibility,” says Molesworth. “He has a way of making shows that spin the meaning of titles.”

For their collaboration, Molesworth gave Davis the book she describes as “the bible,” the gigantic three-ring binder that lists all of the works in MOCA’s nearly 7,000-piece collection. After combing through the binder, Davis came up with a dozen exhibition proposals for the Underground Museum, starting with Kentridge, which will be on display until November.

This first show went off without fanfare. “What’s cool is his low profile,” says Molesworth. “People hear about it through word of mouth.”

Over the next three years, the Underground Museum will present one to two exhibitions curated by Davis per year – some of which are more abstract; others more topical. The museum examines concepts for feasibility. Among them: a show called “Non-Fiction,” in which a variety of works from MOCA’s collection would be displayed on a wallpaper designed by conceptual artist Robert Gober that shows a black man hanging from a tree.

The idea, says Molesworth, is “for the Underground to take the lead and we take the back seat.”

Part of the plan is also to bring Davis and the Underground Museum to MOCA. The museum is launching a project this summer called “Storefront,” in which various artist-run spaces in Los Angeles will be invited to take over a storefront-like space located across the courtyard from the museum’s bookstore on the Grand Avenue campus.

The first exhibit, which opens in August, will be a cover of Davis’ Imitation of Wealth show from the Underground Museum. Next February, the artistic group public fiction will occupy the space for a series of interactive projects. All these exhibitions will be accessible separately from the main museum and will be free of charge.

“It’s all very organic,” says Molesworth. ” It’s an experience. It could be wildly successful. It could fail in a way that we learn a lot from.

Either way, she’s committed to implementing Davis’ vision over the next three years, no matter what.

“We were talking about what would happen if he died,” she said. “I said to him, ‘I’m your curator. And I am the curator of many works where the artist is not present. At the Latin root of [‘curate’] is ‘take care of.’ And while I’m in no way prepared for Noah to leave us as soon as he might, I’m ready to put in the work of taking care of his job. And there’s a group of people around Noah who are ready to take on the job.

Joseph says his brother’s tireless spirit will guide him.

“The underground museum was bigger than Noah in a way,” he says. “Everything is spirit. And spirits can often go far beyond a person. If this is God’s plan, and Noah becomes a spirit, and not a very limited human being, my money is that he is able to do more on the other side.

“William Kentridge: Voyage to the Moon” can be seen at the Underground Museum until November 15. 3508 W. Washington Blvd., Arlington Heights, Los Angeles, theunderground-museum.com.