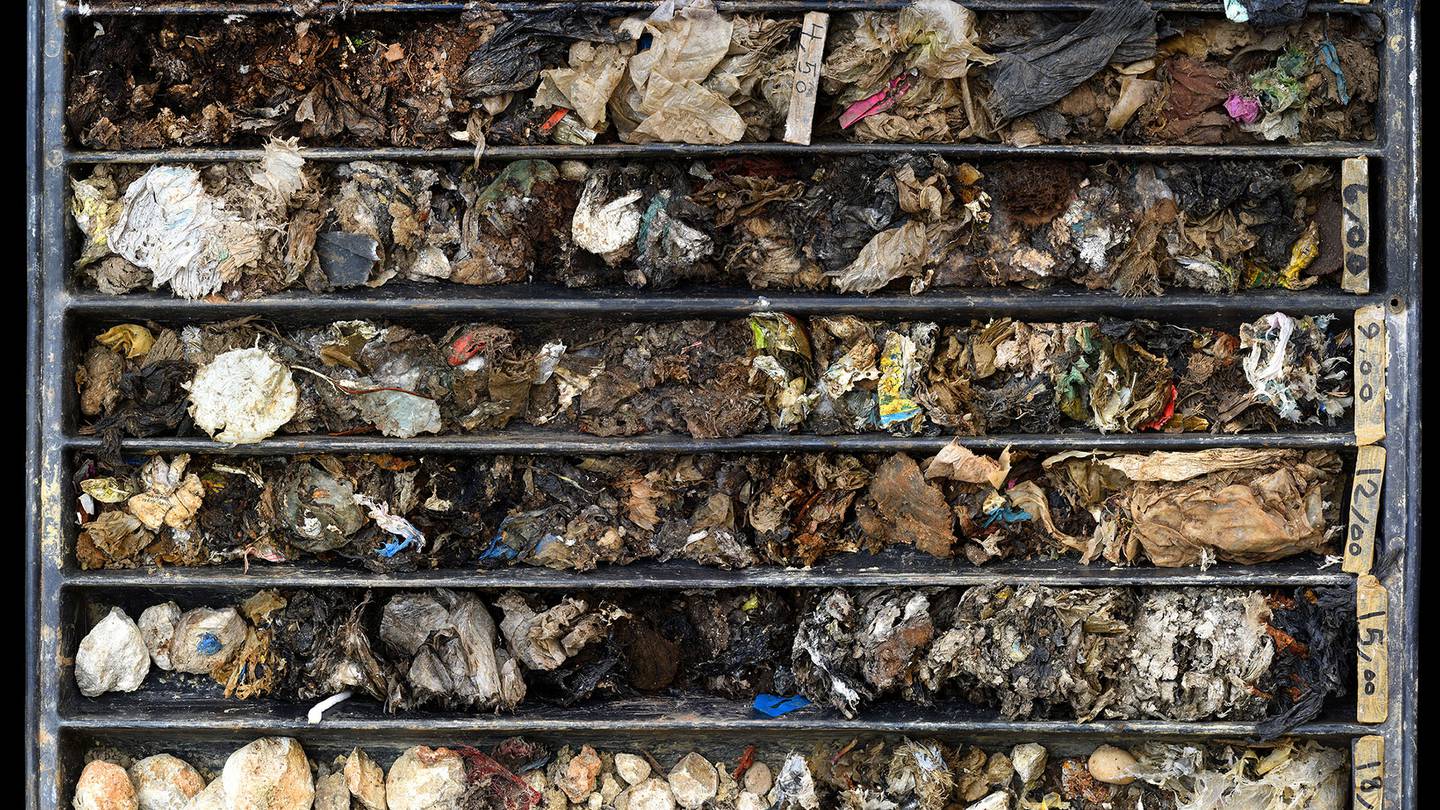 In geology, the term “unconformity” refers to a break in the Earth’s geological record. It is a time gap between two strata, a break in the rock record that can be caused by a variety of factors including erosion, natural disasters, and changes in sea level.

This means that two layers of sediment of distant ages – 200 million years, for example – can come into contact with each other, leaving a gap between the two.

Poetically, the artist and filmmaker duo Joana Hadjithomas and Khalil Joreige think of these intervals as “temporal breaks”, pockets of time and history that are missing or not accounted for.

They borrowed the term “discordances” as the title of their ongoing project, which uses cores dug from the Earth to reflect on urban memory and alternative historical narratives in man-made environments.

The project’s works – video, photography and installation – have been brought together by The Third Line for the exhibition Messages with(out) a code, on view in the newly renovated gallery space in Dubai until April 26.

Non-conformities began after Hadjithomas and Joreige were invited by a friend, engineer Philippe Fayad, who analyzes soil for real estate developments, to join him on one of the drilling excursions to a construction site.

The process involves inserting hollow steel cubes into the ground to extract a cylindrical section of earthly substance. The materials are then arranged according to their layers and can be studied for various purposes.

“The moment we arrived, we saw these carrots in these boxes. We felt it was a connection with everything under our feet. It makes visible everything that is invisible,” says Hadjithomas.

She and Joreige followed Fayad to various sites, eventually expanding the project to retrieve and photograph core samples in Beirut, Paris, and Athens, cities that hold particular significance to the artists’ practices.

Hadjithomas and Joreige were born in Beirut and share their life between the Lebanese capital and Paris. They frequent Athens after having produced a film there in 2013.

The exhibition includes the short film Palimpsestswhich was shot in multiple locations across Beirut and documents the process of core drilling and sorting.

Interspersing drone shots of the site and views of the city’s built landscape with close-ups of the base samples, the film contemplates the visible and subterranean textures of Beirut.

Enlarged fragments of earth and shells hint at several unknown stories as workers display shards of baked clay, food seeds, and even human bones and teeth.

“There are no roots, so one could suggest that these are the teeth of a teenager or a child, not [an] adult,” one of the men in the video explains.

Hanging from the gallery ceiling is one of the artists Time capsules works, consisting of carrots suspended in resin. These cylinders are another way to shed light on what would otherwise be invisible or hidden.

Working with geologists and archaeologists, the duo also re-sculpted the stones and sediments to dig up the stories hidden within.

In Trilogies, they asked experts to select samples and identify clues as to what they might have been. These framed studies have three parts: a photograph of the specimen followed by an archaeological illustration and written details of the location, date, depth of drilling and the artist’s own interpretation of the material.

“We create possible narratives based on what archaeologists and prehistorians see, but it’s tied to something more poetic, not scientific,” says Hadjithomas.

Here, the imagination takes over as the artists question linear approaches to history, as well as the rewriting of the past. The answers to these mysteries aren’t easy, and it’s part of the duo’s practice, including in their films, to explore the truth beyond official stories, facts and materials.

After five or six meters, the human presence disappears. We come to geology

In their 2000 documentary Khiamfor example, they interview former prisoners of the Khiam prison camp established by Israel during its occupation of southern Lebanon.

Subjects seem to remember every detail of their prison cells, torture, and daily life, but it’s clear that when the factual elements fail, the personal testimony becomes clearer and more refined.

Similarly, the artists’ documentary Ismyrna / Ismyrna (2016) on the late Etel Adnan studies the transmission of memory through family history. Both Hadjithomas and Adnan attempt to rebuild the city of Izmir, formerly Smyrna, a place they had never been to, but which had meant so much to their families.

Regarding soils and sediments, what stories can be revealed and translated to us? And what happens when, as in Non-conformities these stories dissolve between the spaces?

Their textile work Message with (outgoing) code attempts to address these concerns. In collaboration with weavers, the artists made tapestries from aerial photographs of earth and stone, laid out on the drilling sites.

The original photographs were damaged in the Beirut port explosion in August 2020, making the woven versions a form of restoration and recovery.

Opposing the softness of the textile to the hard stone depicted in the tapestries, the artists also work on a reinterpretation of what was.

Meanwhile, the photographic series A statefrom 2019, shows three images of core samples drilled from a landfill in Tripoli, where mounds of garbage – now rising 45 meters above sea level – have existed for more than 25 years.

We don’t see the landscape or the piles of trash, but we can imagine them from the abstract parts of these images: pieces of colored plastic tangled with rocks.

“For 25 years, this waste has been accumulating without being recycled. The waste has become like ‘technofossils’, they show what we humans leave behind,” says Hadjithomas.

In this work, the artists present not only ecological concerns, but also ideas of temporality. “After five or six meters, the human presence disappears [in the samples]. We come to geology,” she says.

For artists, there is more than one way to tell the time. And more than one way to read the story. In the larger scheme of space and existence, human presence is minimal. Cycles of life have gone before us and will come after us, a bit of comfort in seemingly apocalyptic times.

“It’s always about balance, destruction… It gives you the idea that it’s a continuous cycle, we’re part of it,” says Hadjithomas.

Messages with (out) a code can be viewed at The Third Line, Dubai until April 26. More information is on thethirdline.com