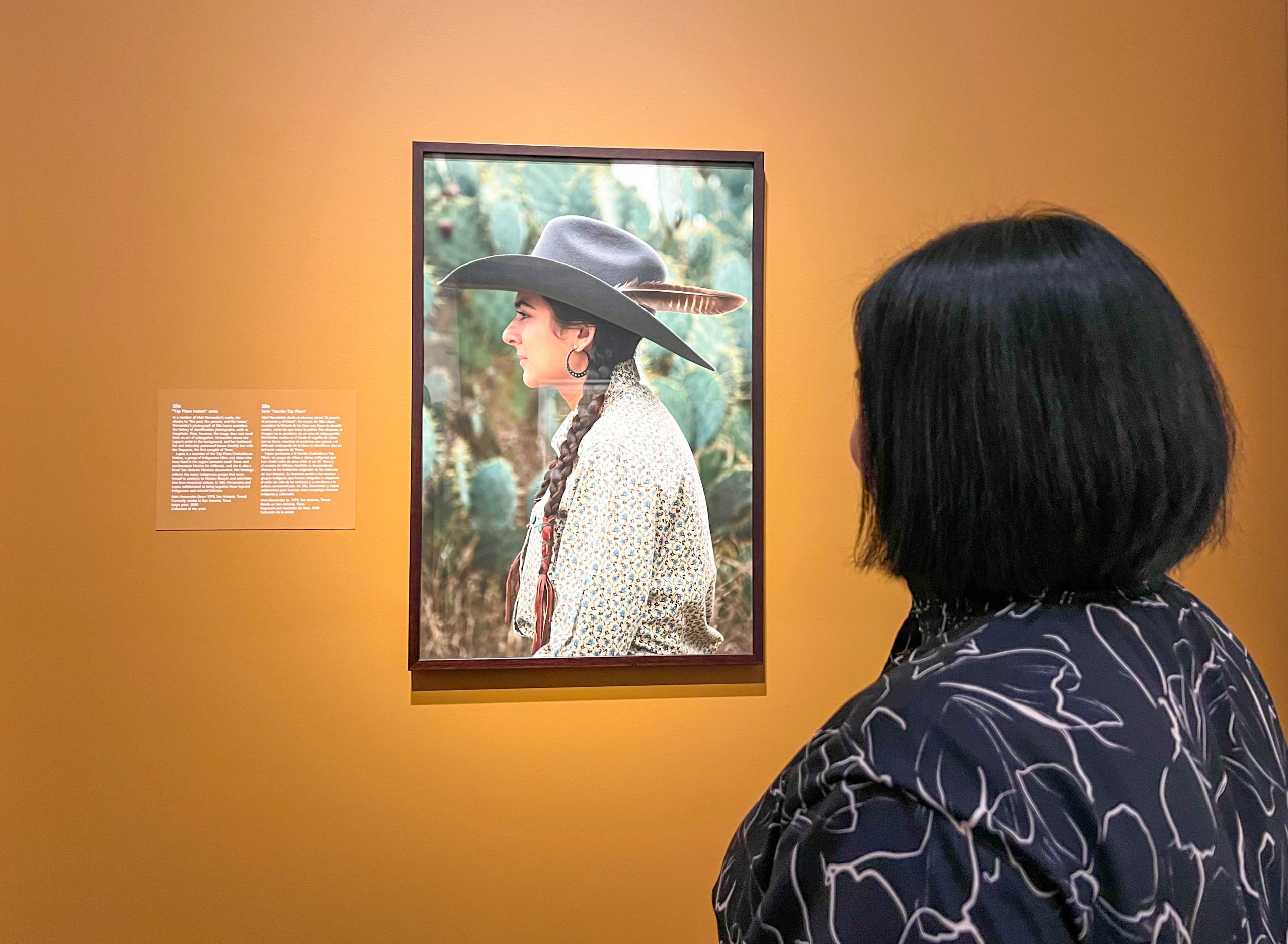 A single photograph of a person hanging on the wall of the National Portrait Gallery in Washington is much more than meets the eye.

For San Antonio artist Mari Hernandez, who has visited the Smithsonian Institution Portrait Gallery regularly since childhood, the image represents a dream come true. Photographic portrait of Hernandez in 2020 Silia joins 42 other works of art from across the country in the triannual Outwin Boolever Portrait Competition exhibition.

Behind this portrait hides a journey from studying English literature at the University of Texas at San Antonio, to working for years in non-profit arts organizations, with an intermediate membership in Mas Rudas, a collective of Chicana Artists, winning a Joan Mitchell Foundation Emerging Artist Fellowship in 2017 Exhibitions and Landing at Crystal Bridges Museum of American Art, Artpace, Galveston Art Center and other institutions artistic.

Reflecting on how far she’s come, Hernandez, 39, said, “I’ve been doing this job for a long time and I have this vision of where I want my job to go.”

Years of volunteering with the organization led him to run its youth photography summer camp and work full-time managing the El Placazo newspaper and the association’s after-school programs.

In 15 years, she learned how the community-driven organization worked from the inside.

“It opened up all of these things to me,” she said. “To be introduced to community art, to be introduced to the art of murals and the connection between my Mexican American identity and the community to art and why it is important, how art can uplift a community and give a voice to the people. … It was like I had found a home, I found out that was what I wanted to do.

She continued to learn about contemporary art styles and practices when her husband JJ Lopez, who now manages Trinity University’s KRTU 91.7 FM radio station, worked on reception at Artpace. In particular, the garishly staged photographic work of Cindy Sherman impressed her greatly. “I just ate everything I could. She was really my main influence in terms of self-portraiture,” Hernandez said.

Sherman’s influence is evident in Hernandez’s use of elaborate costumes and prosthetics, which transform self-portraiture into an art of portraying oneself like others.

Chad Dawkins discovered Hernandez’s work with Mas Rudas while working as a gallery technician at Artpace. When he became gallery director at the Southwest School of Art in 2017, Dawkins chose Hernandez for a solo exhibition, which would become the 2018 What’s left exhibition featuring the artist in black and white prosthetic portraits based on the pseudoscience of physiognomy.

Hernandez and Dawkins worked together on a statement for the show, with “pictures on pictures”, “pictures on story” and “pictures on representation” section captions, succinctly capturing the layered goals of his work.

Physiognomy wanderingly studied how a person’s facial features determined their intellectual and behavioral characteristics, which the statement said informed “stereotyping, xenophobia and racial profiling” in the troubled history of colonialism and the contemporary racial tensions.

Hernandez decided that portraiture, from its origins through its aristocratic days and up to today through various technologies, was the right way to approach these complex issues through a very personal lens.

Breathe life into the past

Although his images of ethnographic subjects and figures dressed in colonial-era costume clearly reference history, Hernandez intends them to bring the past to life.

Dawkins and Hernandez chose a linear display of portraits printed on a very fine material known as silk linen. When the slightest air conditioning breeze passed through the galleries, the seemingly historic portraits moved. Dawkins said the effect was uncanny, matching Hernandez’s choice of semi-transparent material to render his portraits as “ghostly apparitions”, pointing out that the story “remains” present, as the title of his exhibition suggests. .

When curator Dennis Nance brought the images to the Galveston Art Center in 2020 for a solo exhibition titled representations of truthhe and Hernandez chose to present them in rows, so viewers could see multiple images through each other, mimicking a multiple exposure effect the artist uses for some images.

“There are a lot of layers that can be revealed when you engage with them as a viewer,” Nance said.

The layers of story present in Hernandez’s shift from self-portraiture to portraits of others are subtle, but definitely present.

In the National Portrait Gallery alongside portraits of American presidents and founding fathers, Silia depicts a young woman whose personal story and legacy are tied to the much deeper history of the United States, thousands of years of Native habitation followed by centuries of colonial occupation and colonization.

Hernandez first met the portrait’s subject, Silia Lopez, while working on a commission for the City of San Antonio’s Department of Arts and Culture, making a piece that would eventually be displayed at the hotel. of town.

Encouraged to consider land and geography for her commission, Hernandez said she made an “immediate connection to the original inhabitants of our area…highlighting our history, highlighting this community whose history is often relegated at the margin”.

Indigenous communities are too often historicized, Hernandez said. “The Coahuiltecan people are part of a huge community of urban Indians.” A collaged portrait would bring that past back into the present and into City Hall, what Hernandez called “People’s Square.” Silia Lopez, in particular, would represent the Tāp Pı̄lam youth, and dressed in vaquera gear would be “[pay] tribute to its roots, the first cowgirls.

Although Hernandez took great care in creating this image and the one that would eventually be displayed in the nation’s capital, no photographer at the time knew if a portrait would ultimately convey the truth and depth of its subject.

But when Hernandez saw the results, she knew the time was right to apply for the prestigious triennial portrait competition she had long sought to enter.

“How could they not like it?” Hernandez said of the picture. “It’s such a beautiful picture of her. She’s a beautiful young woman. So I felt quite confident when I walked in. Her confidence was justified when she was selected for the exhibition from 2,700 applications.

The nation in all its diversity

The National Portrait Gallery closed for renovation from 2000 to 2006 and reopened with a new perspective aimed at “fostering new understandings of portraiture and how this art form helps to image the nation in all its diversity and richness” , said Taína Caragol, curator. of painting, sculpture and Latinx art and history and co-curator of the Outwin Boocher competition.

The competition, endowed by a former docent at the museum, offers a “snapshot of the many different ways artists engage with the genre, and in particular how artists subvert the genre to highlight those who have not been depicted, subverting the original portraiture tradition that served the elite.

The curator of photographs and co-curator of the exhibition, Leslie Ureña, said that the portrait of Silia, taken in profile, subverts a view more common to identity photos and ethnographic imagery than to the large portrait. Hernandez and Lopez chose the profile view, “taking that power dynamic and shifting it in a way that they represent themselves,” Ureña said, rather than being represented by an authoritative point of view. .

“There’s a lot of value that this young woman from South Texas with this intergenerational connection to the first peoples” is in the national museum, Hernandez said.

“When we think of places like the Smithsonian, and specifically the Portrait Gallery…you see these characters, and you realize they’re important people, that’s our story, that’s a timeline of how we are become,” she said.

When the history of portraiture expands to depict Lopez and others of underrepresented heritage, it becomes relevant as a continuing art form, Hernandez said.

“There is a lot of value in the portrait,” she said. “My family has huge photographic archives. It had a big impact on me in terms of learning who I am, where I’m from and my own identity, and creating that connection to the past.

Now that Hernandez has achieved a dream, she will focus on pursuing others. While continuing to work as a program manager for the National Association of Latino Arts and Cultures Leadership Institutes and Convocations, she is preparing for upcoming exhibitions in Houston and Tennessee and continues to work under contract for the Smithsonian Archives of American Art.

Hernandez said she was grateful for the opportunities she had, both as an artist and working for nonprofit arts organizations. “All the work is linked. It all boils down to these major things that I care about and work towards in my life.