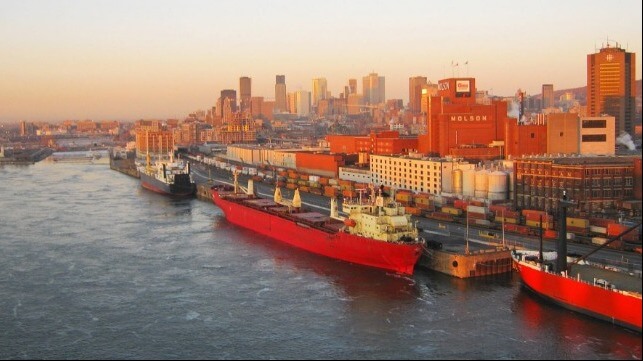 Freshwater ecosystems are threatened by a host of environmental stressors from human activities. The invasion by non-native species is one of the most insidious and impactful.

Over the past two centuries, established populations of nearly 190 non-native species of invertebrates, fish, plants and microbes have been discovered in the Great Lakes basin. They have been introduced through several sources and pathways, including canals, the release of pets, the dumping of bait buckets, aquaculture escapes, and most notably, the discharge of ballast water from transoceanic ships.

Ships’ ballast tanks can contain various life stages of invertebrates, fish larvae, and huge amounts of phytoplankton and zooplankton. Ballast water discharge is responsible for thousands of coastal invasions worldwide. It has been the largest cause of invasion in the Great Lakes since 1959, when the modern St. Lawrence Seaway was opened to accommodate larger ocean-going ships carrying cargo.

In the mid-1980s, a freighter from Eastern Europe began an overseas voyage to the Great Lakes. Before the ship left its home port, water was pumped into its ballast tanks to add weight and stability in order to cross the Atlantic Ocean safely. The water contained larvae of an invasive freshwater mussel. After crossing the St. Lawrence Seaway, the ship dumped some of the water – and mussel larvae – into a Great Lakes port, introducing the zebra mussel to North America. This scenario has happened for many other species.

Effective management of the ballast water pathway is critical to slowing the rate of invasion into the Great Lakes and protecting its resources. Here I describe an intervention that apparently achieved this goal.

From 1959 to 2006, a new invader was discovered established in the Great Lakes basin every six to seven months, on average. No other freshwater system on the planet has been invaded so frequently.

Almost two-thirds of these species were delivered in ballast water. They include invaders that have reduced native biodiversity, compromised fisheries, and caused other ecological and socioeconomic impacts in the Great Lakes.

In 1993, Canada and the United States attempted to control ballast water invasions by requiring incoming ships to exchange their freshwater ballast with saltwater before entering the Great Lakes.

The logic behind this regulation was that freshwater organisms in the ballast tanks would either be purged or killed by exposure to salt water, and any marine organisms randomly captured during the process would be unable to breed in the Great Lakes.

Surprisingly, new non-native freshwater species, such as the fishhook water flea, Ponto-Caspian amphipod, and blood-red mysid shrimp, have continued to be discovered in the Great Lakes for more than a decade. after regulation.

The effectiveness of the regulations was undermined by incoming ships not being required to undergo a ballast water exchange because they declared they had no pumpable ballast on board, despite there is residual water in their “empty” tanks.

In fact, these ships, which made up the majority of ships entering the seaway, carried an average of 47 tons of residual water and 15 tons of sediment in their ballast tanks and contained various living freshwater invertebrates.

After visiting a Great Lakes port to unload their cargo, these unregulated ships pumped in water to replace lost weight. Then they would go to another port to pick up a new cargo and discharge the water, now contaminated with organisms. Several invaders have been introduced to the Great Lakes by this route.

An unprecedented reduction in invasions

To solve this problem, a procedure called a salt water flush has been developed. Shipboard experiments showed that flushing the ballast tanks with seawater to the point where the salinity of the tanks reached oceanic concentrations significantly reduced the abundance and diversity of organisms in the tanks.

In 2006 and 2008, Canada and the United States, respectively, mandated all ocean-going vessels to perform a saltwater flush to ensure that partially filled ballast tanks contained water corresponding to the salinity of the the ocean before entering the Seaway. The regulation was enforced by inspection on board each ship.

My colleague Hugh MacIsaac and I tested the effectiveness of this regulation using historical data. In our study, we compared the number of newly detected non-native species recorded in the basin over three separate 13-year periods: 1981–1993, when ballast water was unregulated; 1994-2006, period of partial regulation; and 2007-2019, the period of strict regulation which applied the new procedure.

We detected 19 invaders and 26 invaders in the first and second periods, respectively. After saltwater flushing became mandatory, the number dropped to just four new invaders in 13 years. Since 2008, new invasions recorded in the Great Lakes basin have decreased by 85%. The frequency of invasion is now at the lowest rate ever recorded in the basin.

We took into account changes in water temperature, search effort and vessel traffic during these periods. None of them can explain, even in part, the abrupt drop in the invasion rate.

While other management efforts – such as public education and laws prohibiting the possession and sale of particular species – may have contributed to the decline, the empirical evidence cited in our study indicates that ballast water regulations is the main cause.

The risk of invasion is reduced, but not eliminated

The Great Lakes remain at risk of invasion through a variety of other pathways, particularly those associated with the “live trade” of ornamental pond plants, aquarium pets, baitfish, and live animals sold in food markets.

One of them is the tench, a European fish brought illegally to a Quebec fish farm in the mid-1980s and whose population is now expanding in the St. Lawrence River.

Meanwhile, four species of non-native carp (bighead carp, silver carp, grass carp, and black carp) raised on fish farms in the southern United States have spread throughout the Mississippi basin in recent decades. and pose a continuing risk of invading the Great Lakes. Grass carp spawn in tributaries of Lake Erie and are poised to invade parts of the basin.

Finding new strategies to manage these risks is vital to conserving biodiversity and protecting a multi-billion dollar fishery. Our study has shown the benefit of collaboration between researchers, governments and industry towards this goal.

This article is part of our series The St. Lawrence River: In Depth. Do not miss the new articles on this mythical river of remarkable beauty. Our experts look at its fauna, its flora, its history and the challenges it faces. This series is brought to you by The Conversation.

This article appears courtesy of The Conversation and can be found in its original form here.

The views expressed here are those of the author and not necessarily those of The Maritime Executive.