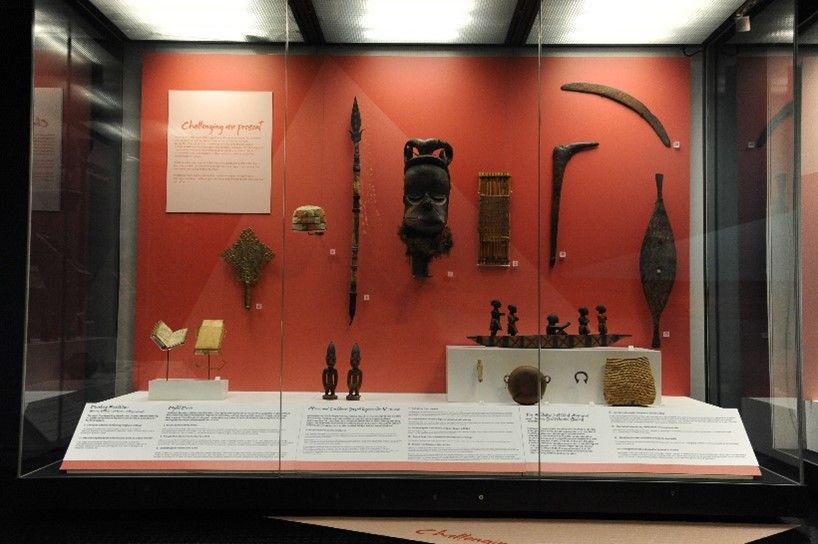 Decolonization is a complex subject for many communities. In Northern Ireland there are particularly sensitive issues relating to the culture, identity and heritage of the British Empire.

Racist actions and attitudes were – and are – present among people from a variety of community backgrounds in Northern Ireland. Since 2016, the number of racially motivated hate crimes in the country has overtaken sectarian ones, despite ethnic minority communities making up only 1-2% of the population.

People from ethnic minorities are not well represented by National Museums NI. Our collections have traditionally been interpreted from a white and Western perspective. We know that some of the objects in the Ulster Museum‘s World Cultures Collections were acquired through means now deemed highly unethical and over time have become disconnected from Indigenous communities.
they represent.

Decolonizing museums is the right thing to do – there is a strong ethical imperative and we owe it to our audiences and our stakeholders.

While the National Museums NI had begun work addressing racial inequality and exclusion, it was the 2020 police killing of George Floyd and the immediate international response, including the Black Lives Matter movement, that accelerated the need to process this work further. publicly.

Since much of the expertise and experiences needed to inform our approach lie outside the museum, working in partnership with communities has been essential.

We have been fortunate to work with passionate and knowledgeable partners – those who support marginalized communities locally and indigenous communities internationally – who have helped us review the objects proposed for exhibition through face-to-face meetings. online and in person.

These exchanges were an opportunity to better understand the meaning invested in the objects by those who made and used them, and the meaning they continue to have in contemporary society.

Working closely with Native Americans Chelle McIntyre-Brewer and Sean Young, we discovered that several of our documentation records for items such as the Haida Bentwood Food Box were incorrect.

The discussions were also moving. Partners from the African Caribbean Support Organization for NI (Acsoni) expressed a sense of joy and pride upon seeing objects such as the yomkwo, a stringed musical instrument from Nigeria, in their local museum in Belfast.

The sadness was felt when reflecting on the history of manillas (commodity money, usually bronze or copper) which, during the transatlantic slave trade, were frequently exchanged for people who were then enslaved. It was felt that these discussions were a necessary process for healing and reconciliation and the expression of these feelings in the object labels was an important part of the process.

Acsoni’s partners asked provocative questions about how objects such as the Ekpo society mask, depicting an idiok or a black demon, could have been used to distort Africa and legitimize the presence of missionaries in Africa .

Such questions are a new way of thinking about the impact of collections on communities, and this is represented in the exhibition.

Some partners also donated and lent items that reflected their lived experiences, hopes and aspirations for the future. This included two items from the Belfast Multi-Cultural Association: a burnt rafter from the roof of their building, which was the target of arson in 2021, and an image of a check presented at a fundraiser in later line. Both elements are powerful in helping us discuss the kind of society we want for our future.

In the end, 51 objects were selected by the partners for the exhibition which opened its doors in March. Initially, we shared our commitments against racism, as a marker against which our audiences can challenge us in our work. These are:

The evaluation of the first months shows that 83% of visitors rate the exhibition as “very good” or “good”. Although there are feelings of sadness, guilt and anger at the racist attitudes and actions, the public is also “happy to see the stories told”. On top of that, 76% of our audiences agree they want to learn more about world cultures, while 68% agree the museum should do more to highlight and correct racism and exclusionary practices.

The exhibition was first offered in June 2021, and although it is difficult to complete an exhibition in a relatively short time, it was designed to be flexible. And that’s a first step, rather than the end result.

As racial inequality is still a live issue, we have incorporated resources to update the interpretation and to introduce new objects and stories to the exhibit over time.

We are continually learning and developing in partnership with our local and international communities. This learning will shape our programs and services in the future.

As a curator, I am not a trained ethnographer, nor do I have experience with racism. But what I think I brought to the table are skills and experience in developing partnerships, uncovering hidden stories and developing underrepresented audiences, and a passion for inclusion. and diversity.

Our critical partners and friends, the leadership and encouragement of our management team, and the guidance provided by the Museum Association’s Decolonization Task Force have all been crucial to the development of the exhibit.

PR support for the launch of the exhibition