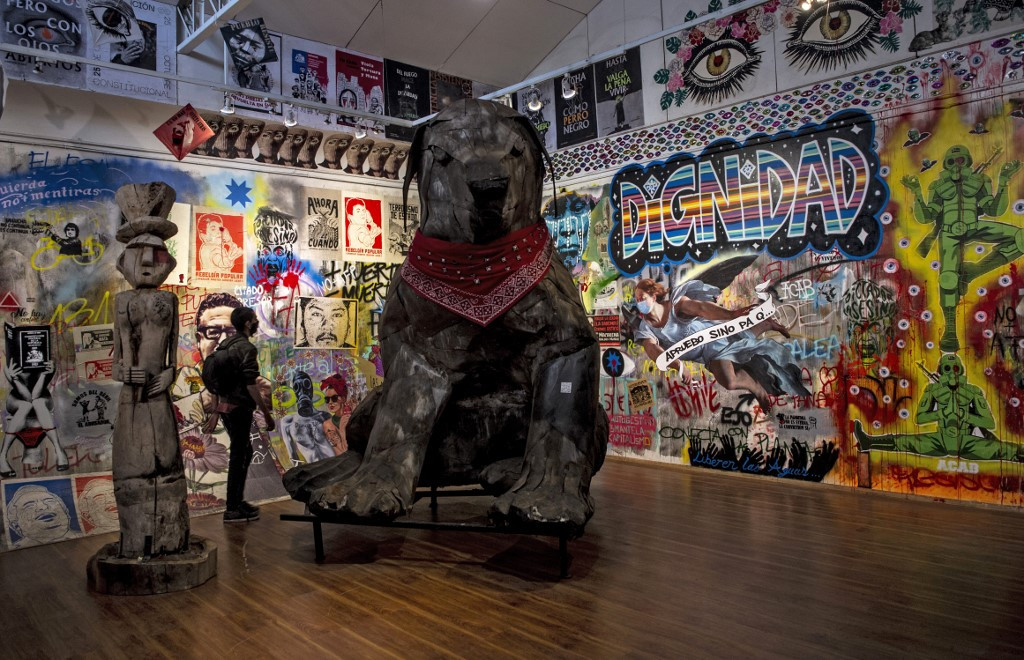 Flooded with multicolored posters, angry graffiti and other symbols of protest – metal shields, tear gas canisters – the Santiago Social Uprising Museum aims to keep alive the memory of months of deadly protests that left a lasting mark on Chile.

Months of protests that claimed more than 30 lives erupted in October 2019, initially against rising public transport fares, but quickly turned into wider anger over social inequalities.

As a colorful backdrop to the ugly clashes, the walls of Santiago quickly shouted their own artistic protest. The messages in the murals carried the accumulated rage of years of social injustice, but also the hopes of a raft of young Chilean artists for a better future.

Now, with the tumult of the streets subsiding, the rage has been preserved at the museum – located a stone’s throw from Plaza Italia, the epicenter of the uprising.

“We wanted to create this space to show what was expressed in the street during the demonstrations,” plastic artist Marcel Sola told AFP.

The museum brings together the work of some 70 street artists, responsible for reproducing their protest pieces and assembling assorted objects considered emblematic of the demonstrations.

Among them, frescoes that appeared at the height of the protests, one depicting Salvador Allende – the former socialist leader overthrown by General Augusto Pinochet in 1973 – wearing a jacket of colorful flowers and shaping a heart with his hands. Another shows a masked angel with the word â€œdignityâ€ inscribed on his forehead.

The largest piece is Sola’s giant sculpture of the stray dog â€‹â€‹which has become a symbol of the uprising. With a red bandana around his neck, the black dog has achieved celebrity status in previous student protests against the police. Protesters dubbed the animal “Negro Matapacos” – or Black Cop-Killer.

The museum opened in early November, just after the referendum in which Chileans voted overwhelmingly to replace the Pinochet-era constitution, seen as the main obstacle to fundamental reform.

Even with restricted opening hours due to the coronavirus pandemic, the museum receives around 150 visitors per day. Many of them participated in the events the exhibits commemorate, moved now as they quietly reflect on the news photos and videos of the protests.

â€œI love the warmth I felt when I arrived. I felt at home. It gave me a lot of memories and a bit of heartbreak,â€ said Pedro, a 24-year-old musician.

â€œI felt like it was a collection of things on the streets, but in very artistic terms,â€ said Mailen, a 27-year-old saleswoman.

Among the objects that stand out are the metal shields fashioned by radical ‘frontline’ protesters – hooded youths who, armed with sticks and stones, clashed with riot police, the water cannon and tear gas. . For some, they were heroes of the protests, for others, vandals.

Other works depict the 460 victims who suffered serious eye injuries during the protests, mainly from the impact of bird projectiles or tear gas canisters fired by riot police.

There are also the pots and pans frantically beaten by ordinary men and women, to make their anger heard in countless “cacerolazo” demonstrations.

Those hanging in the museum carry the words: “Now that we have awakened we must be aware.”