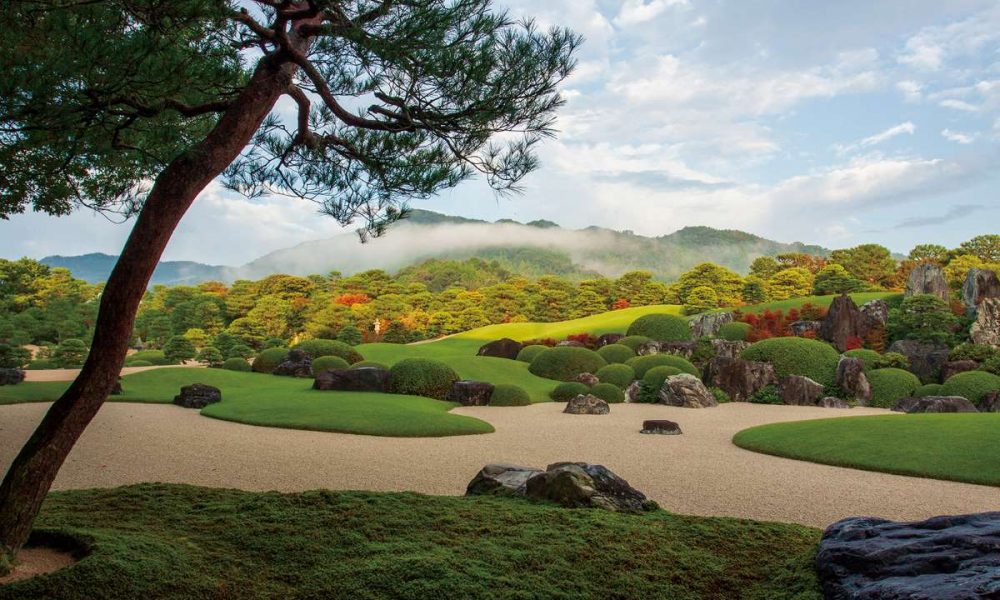 The Adachi Museum of Art is known for its collection of modern Japanese art by many artists, including Yokoyama Taikan. But for much of the world it is known for its beautiful garden, and indeed it was selected in March as the best garden in Japan by Sukiya Living, the Japanese gardening journal, a prestigious magazine in the United States. This is the 19th year in a row that the museum has been ranked number one.

Located in Yasugi City, Shimane Prefecture, the garden is characterized by a fusion of nature and technology, embodying the belief of founder, Zenko Adachi (1899-1990), that “a garden is a form of painting “.

This article will explore the management system known as the “Adachi Method” that continues to support the beautiful garden.

A star among Japan’s prestigious gardens

The picturesque garden, including the mountains in the borrowed landscape behind it, covers 165,000 square meters. It is located in the suburbs, about 20 minutes by bus from JR Yasugi Station. When he visited in late March, the trees shone in the spring sunshine as if to rejoice after the long winter in the San’in region of southwestern Japan.

“We maintain the garden at the level of the best in Japan, but I was relieved to see that the record was not broken,” said 31-year-old museum public relations officer Ayaka Kanno.

The Journal of Japanese Gardeningspecialized magazine, presents every year since 2003 the Top 50 Japanese gardens. Among approximately 1,000 candidate sites in Japan, experts from around the world make their selections based on criteria such as the quality of the gardens, the harmony with the buildings and the hospitality of the staff towards visitors.

The Adachi Museum has always been ranked first, having maintained its position ahead of the Katsura Imperial Villa in Kyoto and other famous gardens.

The museum’s Japanese garden was started in 1968 by local businessman Zenko Adachi. Although he initially commissioned a prominent landscape architect to design the garden, he later directed the gardeners himself, saying, “I want to create my own ideal garden.”

It took Adachi about 15 years to create the basic form of the current garden. It consists of a Japanese (dry) rock garden (karesansui), a moss garden, a white gravel and pine garden, and a man-made waterfall named Kikaku Waterfall, inspired by a painting by Yokoyama Taikan.

Maintain the garden 365 days of the year

The Adachi Museum of Art has a garden maintenance division, which is unusual for an art museum. It also employs eight full-time gardeners.

Division chief Nobuhiko Kobayashi, 59, was among those trained by Zenko before his death. “Not a single stray leaf is left behind before the museum opens,” he says. “We follow Zenko’s words that even small acts add up over time.”

The museum has never closed for a single day since it opened in 1970. 365 days a year staff, including those who do not work in the garden division such as cafe staff, clean the garden with a bamboo broom to start their day.

The gardeners arrive at work at 7:30 a.m. and spend an hour tending to the garden before the museum opens. During opening hours, the gardeners are busy pruning and replanting.

The garden division is led by Mr. Kobayashi, the oldest member of the team, and includes members as young as their twenties. Instead of recruiting elites such as experienced gardeners and competition winners, museum gardeners are hired from the local agricultural and forestry high school. They learn the Adachi method from the bottom up while working in the garden.

“We want them to learn skills that are appropriate for this garden,” says Ms. Kanno. “For example, of the approximately 800 red pines in the garden, more trees in the front are thinned out and as much as possible in the back so that they blend naturally with the mountains in the background.”

In addition, trees ー including about 400 red pines alone ー are grown in temporary planting areas near the museum. And when the pines in the garden become too big, they are replaced. Every morning, director Takanori Adachi takes photos and checks their condition. If a plant grows too large, the stones in the garden will look too small, so he constantly checks whether there is an imbalance in the landscape.

These efforts were hailed by the magazine as “godly stewardship” and resulted in the garden being ranked the best in Japan for 19 consecutive years.

What is the Adachi method?

According to Ms. Kanno, this means that “all museum staff share a common sense of beauty based on the ‘Zenko mentality’.” To achieve this goal, the museum has meticulous pruning methods and temporary planting sites.

Yusuke Yamamoto, a 22-year-old gardener in his fifth year, says, “We want the garden to look beautiful from all directions. “We are the best in Japan in all aspects of the garden, including the cleanliness of every corner,” he boasts.

The number of visitors to the museum, which had topped 600,000 thanks in part to the effect of its increased publicity in the rankings, fell to more than 200,000 due to the COVID-19 pandemic. However, the Zenko mindset is still in place.

“Zenko used to say, ‘Whether it’s one person or hundreds, it’s up to us to impress them when they see the garden.’” Mr. Kobayashi explains. “We believe gardens are most beautiful when they make the most of nature, and we do our best to preserve them.”

(Read the article in Japanese on this link.)