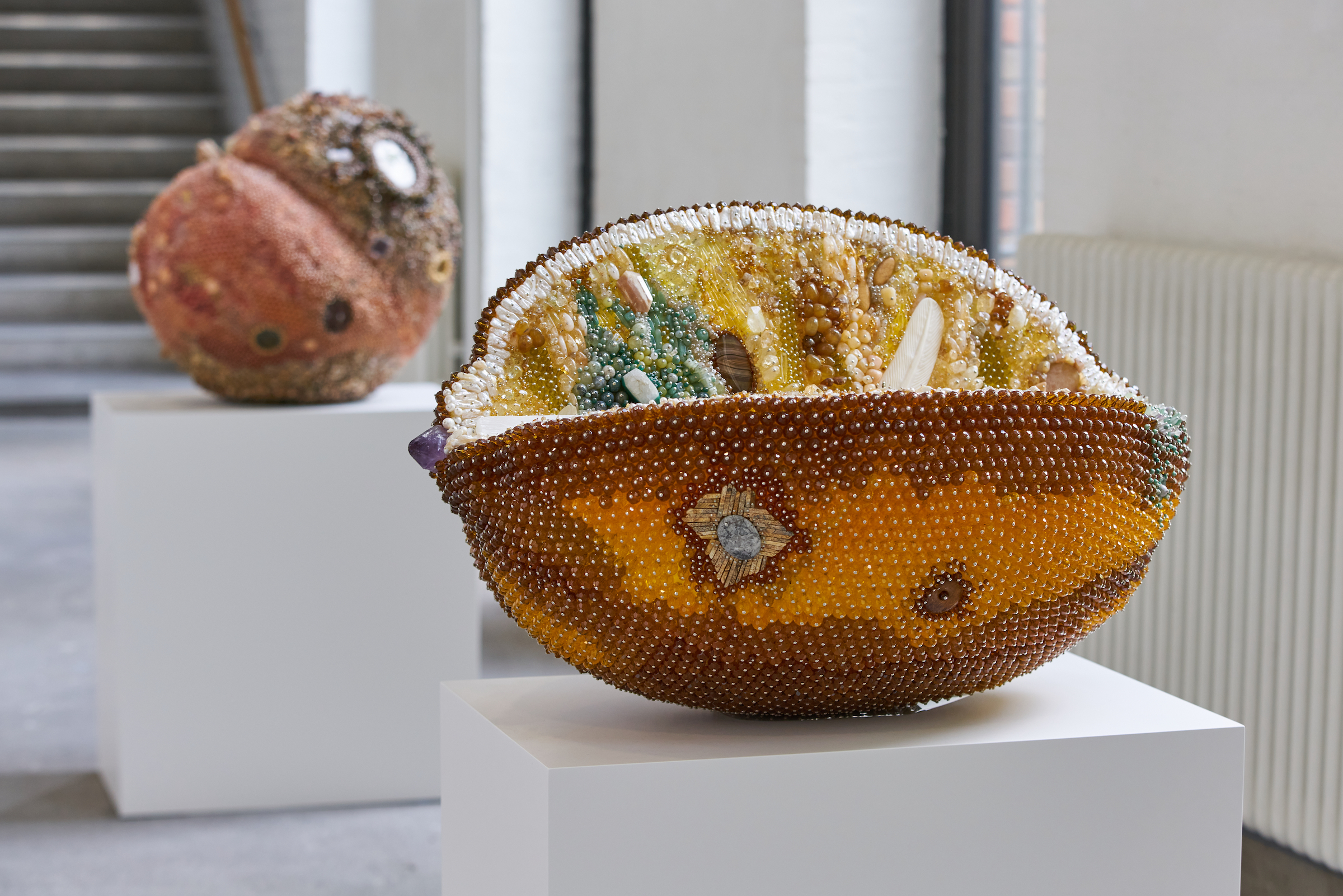 Exploration of loaded stories at the Liverpool Biennale

LIVERPOOL, UK — A sonic thread runs through this year’s Liverpool Biennale. From Turner Award-nominated BOSS installation, “The only good system is a PA system” (2021), to the work of the artist representing Scotland for the next Venice Biennale, Alberta Whittle, with “between a murmur and a cry” (2019), sound is an integral part of the works presented.

David Zink Yi’s captivating installation “Horror Vacui” (2009) oscillates between a narrow focus on the percussionists and scenes of band rehearsals and Afro-Cuban rituals, all of which seem to have been filmed separately but blend seamlessly. The film is set up in the Martin Luther King building and shown on two giant screens in an otherwise open space. In this sparse setting the effect is symphonic, but placing the work in this context raises the question, is the art in the performance or in the recording? As an author, but also a member of De Adentro y Afuera, the group presented in the film, Zink Yi blurs the boundaries between participation and extraction.

Entitled The Stomach and Port, this iteration of the biennale draws attention to the similarities between the two entities as spaces of encounter, passage of matter and transformation. The notion of port is clear, perhaps even obvious. The stomach, however, is a more abstract and unwieldy concept. A number of works on aspects centered on human anatomy create a disconnect between those who considered the totality of a human experience and those who focused only on the body. It should be borne in mind that stomach and port was originally scheduled to take place in 2020. In the aftermath of a global pandemic, when injustice and inequality determined the outcomes of people’s health, and ultimately their lives, what might have seemed light now rings a little hollow. .

As a maritime city, once a major trading center for the British Empire, Liverpool was a hub through which all kinds of goods passed, including enslaved Africans and the goods produced by their labor. The transatlantic slave trade and subsequent colonial period left an indelible mark on the city’s architecture – from the names of buildings such as West Africa House to grand public buildings and memorials constructed with the wealth brought in from the colonies.

One such building is the Cotton Exchange in the CBD, a nondescript mid-century structure that replaced the city’s old stock exchange, built in the early 1800s. The accompanying guide offers some number of trails – thematic walking routes around elements taken from the overall concept of conservation – that visitors can use as entry points to the biennale. The Bourse du Coton is one of the stages of the “Porosity” journey, with Xaviera Simmons among the three artists whose work is exhibited in the basement with green tiles. His two photographic series Sleep (2018-ongoing) and Index (2011-ongoing) have a tactile quality to them, layered in meaning as well as appearance. In Index, the female subject of each photo has her skirt completely up, the patterned fabric obscuring her upper body. A montage of archival images, objects and clippings are held with clothespins under her skirt. Each image is heavy with the weight of many lifetimes of accumulated memories, a legacy that is both joyful and heavy. Along with the hung photographs, Simmons presents three cinematic works, one of which lists the names of slave owners and the number of slaves in their possession. In this ancient site where merchants exchanged goods, Simmons makes visible the link between monetary value and the human costs of production.

The Biennale has always used Liverpool’s public spaces as well as more formal or traditional art venues, sometimes awkwardly, but this edition feels particularly well integrated into the daily routine of the city. “Pan-African Flags for the Relic Travelers Alliance” by Larry Achiampong (2021) dot the buildings of the city center, blowing in the maritime air, in solidarity with the African peoples of the continent and the diaspora, but also in remembrance of their past and present struggles.

One of the most striking works can be reached by climbing three flights of stairs to the otherwise unused top floor of cosmetics store Lush. Crammed into a narrow corner room of the grand makeshift gallery, “A Maze In Grace” (2021) by sound artist Neo Muyanga, is a disturbing and deliberately claustrophobic experience. A South African opera singer performs the artist’s composition, inspired by the anthem ‘Amazing Grace’, written by slave owner-turned-abolitionist – and Liverpool resident – John Newton. There is no obvious space to sit and watch, with projections of sheet music and archival photographs alternating from one part of the room to another, like a searchlight searching for a unsuspecting subject – the viewer. All the while, a slow, thud in the background and the sound of a drip increase the viewer’s anxiety. The work is a reminder of how entangled we are still in the legacy of these stories. Muyanga originally intended to perform the piece live, but this could not take place due to the pandemic. It’s hard to imagine how much more emotional the work would have been.

If there is an intangible, ethereal quality to the film and sound works that seems to exist outside of conventional time, the physicality of Kathleen Ryan’s sculptures, Bad Fruit (2020), roots us in the present. Its giant sculptures of rotten fruit – a lemon, a peach and a pair of exquisite cherries – are equally beautiful and grotesque. Made of semi-precious stones as well as man-made materials such as glass and polystyrene, the works break down the separation between natural and man-made, inciting economic resource extraction and the human and non-human costs associated with it. — a label explains that the most expensive pits are reserved for the most rotten parts of the fruit. The metal pins that hold each piece of the sculpture together have an honesty about them; evidence of the combined effort preventing the structure from collapsing.

Amid the collapse of many familiar structures – in the art world and in society at large – stomach and port both reveal rot that is no longer contained and remains a part of these structures. It too is weighed down by history and the society in which it exists.

The Liverpool Biennial 2021: The Stomach and the Port continues until June 27 at various venues in Liverpool, UK. The exhibition was curated by Manuela Moscoso.