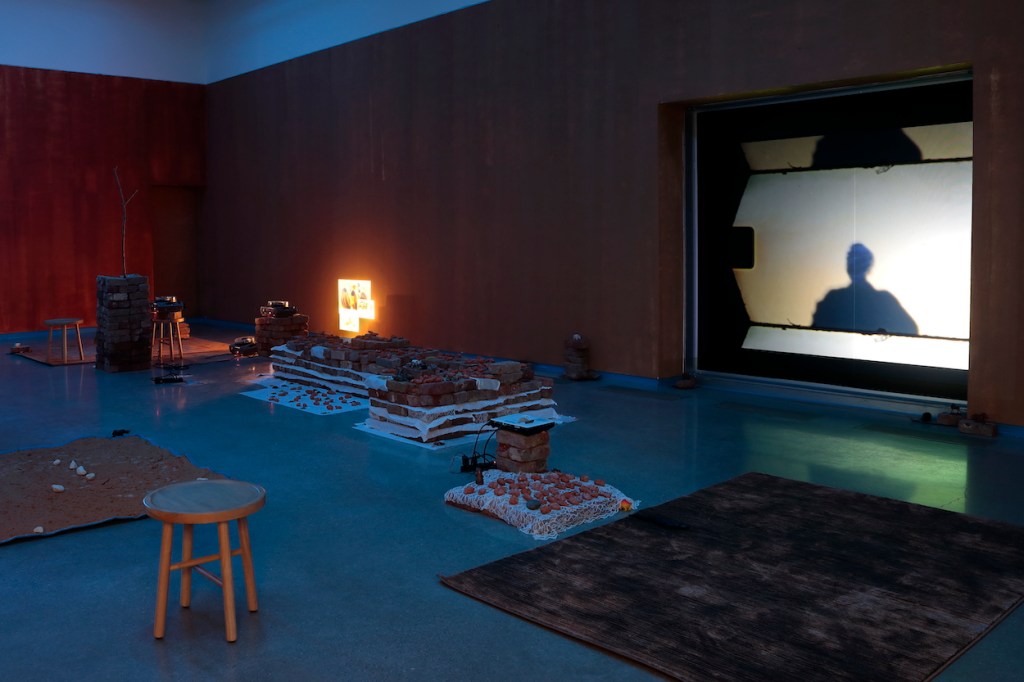 “It is difficult for a person to see the entire elephant,” Dineo Seshee Bopape explained on a tour, talking about the animal figurines found in wood and plastic strewn throughout his exhibit at the Institute of Contemporary Art at Virginia Commonwealth University in Richmond. Referring to the fact that a human may understand a large animal differently than what, say, an eagle or an ant might, Bopape’s commentary could also describe how a viewer might experience his installation, which requires him to crouch down to inspect these bird and mammal figurines placed on earthen blankets and piles of bricks, or gaze at the floor-to-ceiling walls covered with a thin layer of mud. The rest of the show immerses the spectator in subdued blue lighting and a sensory topography of video and sound projections.

Soil is a common element in Bopape’s work, serving here as the literal terrain for a miniature landscape as well as an allusion to broader concerns with geography and territory. Water is also at the heart of this work. It appears in the ground drawings on paper of crested and falling waves that Bopape has created over the past two years, enlargements of these projected onto a long wall of the first gallery. Water is once again the center of attention in the second gallery, where images shot on 8mm film, presented at ground level, represent the artist’s shadow projected onto the foaming breakers on the shore of the Rappahannock River in Virginia. Bopape uses these elements to channel larger stories. She met descendants of slave laborers who worked on one of the plantations that once dotted the riverbank and created small oblong clay sculptures bearing the imprints of their hands, suggesting how bodies and substances could jointly bear such a past. . (An extension of this project can be seen at Prospect.5 in New Orleans.)

During the lockdown of his hometown of Johannesburg, Bopape turned to less material means to address how the environment might bear the imprint of violent stories. She collaborated with musician Tlokwe Sehume to mix vocal and instrumental tracks with sounds of the wind that she recorded before the pandemic at sites in West Africa that were at the heart of slavery and the human trade. people, including ports on the coasts of Senegal and Ghana.

These sounds permeate the show, contributing to a cacophony of discursive components that amounts to a public memorial. The subject – those who are dehumanized and lost in the slave trade – slowly emerges, through a mural text that indicates the places where Bopape gathered the ground, sights and sounds that blend into the spectacle, and through a new one. by Bayo Akomolafe in an accompanying booklet. . Akomolafe speaks of a spirit appearing and dancing amid the capture and transport of people from West Africa to North America; like the Bopape exhibition, it is not a manual telling of slavery but living with its own codes of survival.

That this exhibit is shown in Richmond is significant: the city was home to one of the largest auction houses for the sale of slaves. Former capital of Confederation, it is currently in the process of reinventing its commemorations at the grassroots. The central site of the bronze monument to Confederate General Robert E. Lee has been recovered as a memorial to victims of police violence and a staging area for the Black Lives Matter movement.

The spacious white walls of a museum are very different from the outer roundabout where the Lee monument resided. Yet, as the wall text notes, the two share greatness and bear the memory of “the wealth created by forced labor”; museums are, after all, the heirs of a colonial project. The horizontal constellation that Bopape creates on the ICA floor, and his repositioning of the floor on the walls, reorient this space in a way that resembles the salvage of the Lee roundabout, now marked with small gardens, baskets of basketball and memorials to specific people. Sitting under the enormous pedestal and (recently retired) bronze general on horseback, these additions are on a human scale and scale. The two acts induce a recasting of the conventions of looking and remembering.