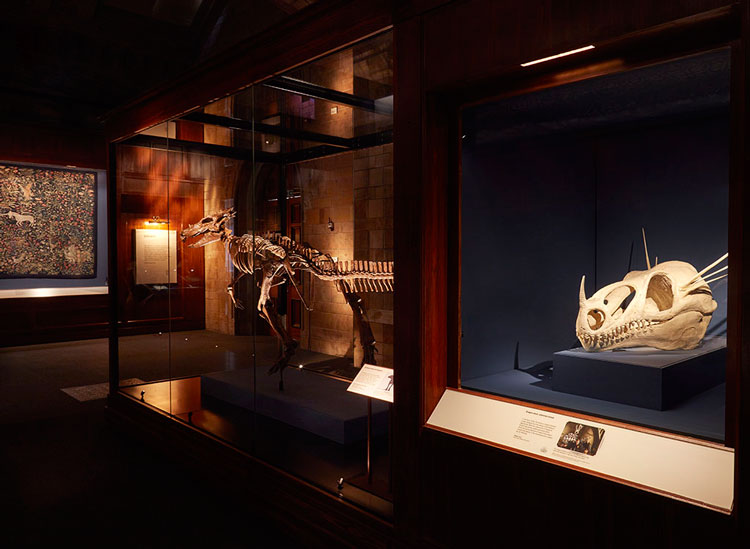 A new exhibit based on content from the Fantastic Beasts film franchise opened today at the Natural History Museum.

The Natural History Museum uses Scamander and its findings as a vehicle to support and share its own work in conservation and zoology. He would like to point out that beyond mermaids and unicorns, there are many fantastic beasts in our own non-wizarding world and they also need to be protected.

“Little difference between the interior and the exterior of the gallery”

The exhibition is divided into three main parts and has been designed in-house. The exhibition’s lead designer, Eleanora Rosatone, calls the first section the â€œMagic Museumâ€ – here visitors get a glimpse of some of the magical creatures of legend and the actual animals that may have inspired their invention.

Rosatone says the inspiration for the design of this first section came from the architecture of the museum itself. The team wanted to ensure that the exhibit remained primarily a Natural History Museum spectacle and not an attempt to replicate a Warner Brothers setting.

For this reason, the wooden cabinets found in the permanent galleries of the museum at large have been reproduced to house decidedly more unusual specimens, each accompanied by a traditional descriptive plaque of the museum.

â€œThere seems to be little difference between the inside and the outside of the gallery,â€ says Rosatone, who adds that this is a deliberate attempt to blur the lines between the real and the fantastic. Narwhal tusks sit alongside “unicorn” horns, while mermaids appear alongside a giant manatee skeleton.

It is in this first section that visitors are also introduced to Newt Scamander. The character acts as a narrative device throughout the remainder of the exhibit, with quotes from him from the films used in the wall graphics.

“A series of groves and glades”

From this museum setting, visitors are then embarked on an adventure in which they can find their own fantastic beasts, explains Rosatone. The ambition here was to create a space that feels â€œinsensitive to humans,â€ she adds.

â€œWith the content team, we developed this idea of â€‹â€‹going through a series of thickets and clearings,â€ says Rosatone. Hidden in the wilderness are creatures from the Fantastic Beasts canon, such as “occamies”, “nifflers” and “bowtruckles”. Unlike the mythical creatures in the previous section, these are all the invention of the wizarding world. Each of the fictional characters is used to relate to real world creatures.

Some animals from the collection are presented in interactive exhibits. The Niffler – a fictional character who likes bright things and looks slightly like a duck-billed platypus – sits in a virtual cave filled with gold and silver. Visitors can interact with the digital niffler by pressing buttons on a nearby podium and â€œgiftingâ€ it with treasure.

Meanwhile, a family of bowtruckles – a hand-sized, insectivorous arboreal species – can be found in a tree projected onto an exhibit wall. Motion sensors installed in the area mean that as visitors get closer to the screening, the bowtruckles react and become more and more ‘protectors’ of their home with movement and sound.

“We needed reality and the fantastic to coexist”

The transitions between the sections are punctuated by â€œscientists’ hangarsâ€. Rosatone explains that these wooden buildings are inspired by both Scamander’s own workspace in the Fantastic Beasts films and those used by actual explorers and environmentalists. Each contains zoological and exploration tools, as well as props from the movie franchise.

As visitors enter the final section, which explains how Scamander acts as a protector of fantastic beasts and how we should do the same in our own world, Rosatone explains that there was a need to balance “reality with fantasy. “.

â€œThe question was really how we could keep the magic of the previous sections, while also dealing with the topic that amazing animals from our own world are being hunted, endangered and on the brink of extinction,â€ says Rosatone. .

The design team chose to use the familiar visual language of the museum, as in the first section, but with a ‘twist’ to it. Rosatone explains that the wooden cabinets have been increased and are inspired by surreal paintings. Light boxes are also used to highlight certain elements, but unlike the previous sections, the lines between fiction and reality are blurred. As Rosatone says: “We needed the reality and the fantastic to coexist”.

“It seems very relevant at the moment”

While some items had to be removed from the final exhibit due to the pandemic and fears of the virus spreading, Rosatone says the showcase is still an interactive showcase that appeals to the senses.

Indeed, it is hoped that as the pandemic situation improves, these elements can be reintroduced as part of the future tour of the exhibition. The dates and locations have not yet been made public, but it is understood that the visit will take place after the exhibition is completed at the Natural History Museum.

Reflecting on the project, Rosatone comments on the size of the company. According to her, this is one of the most ambitious the museum has undertaken in recent history and it took more than three years of planning and design.

â€œIt’s been a constant back and forth between our team and the science team, and it seems very relevant right now,â€ she says.

Fantastic Beasts: The Wonder of Nature takes place from December 9 to August 2021 at the Natural History Museum. For more info, go to here.