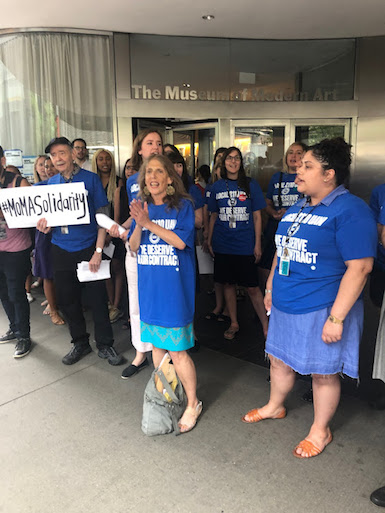 Following protests over labor issues at the Museum of Modern Art in New York City, MoMA Local 2110 union announced this morning that it had reached an agreement for a new contract with the management of the institution. The five-year contract will include a new structure to offer certain employees salary increases and salary increases as well as changes to the MoMA healthcare plan.

In a statement, Maida Rosenstein, president of United Auto Workers Local 2110, said: “We attribute much of the museum’s retractions to the dedicated efforts and perseverance of our members, who have spent months to donate their time to our activism and in record numbers to participate in collective action, as well as the resounding vocal support of our colleagues, friends and the general public.

“MoMA has an amazing staff and we are delighted with the fair and amicable resolution we have achieved with Local 2110,” a MoMA spokesperson said in a statement. “We believe this five-year contract will keep our dedicated staff and the museum on a path to financial stability and future growth. “

As part of the new contract, MoMA will offer a seniority step program that will offer increases to workers after certain periods of time, which the museum had previously sought to eliminate, according to the union. The employee’s share of the costs of family health coverage will not increase and individual coverage will not require employee contributions. The union also said in a statement that guidelines for tuition, paid family leave, commissions and business benefits for members of MoMA’s retail and visitor engagement department have improved.

The news follows two events this summer at the museum that garnered attention – one in May at MoMA’s Party in the Garden gala and another earlier this month that started in the museum lobby. Rosenstein said ARTnews last May that negotiations between the union and MoMA had started in April and that they “were not making good progress”. During both actions, union employees could be seen holding signs reading “MODERN ART OLD SALARY“And” #WeAreMoMA. At the latter, gestures included chanting the world’s industrial workers standard “Solidarity Forever,” with updated lyrics to refer to the museum.

In a statement this morning, Megan Grann, Local 2110 Steward and Sales Specialist, said: “We couldn’t have done it alone, and we are so moved by the incredible show of solidarity throughout. along this process.

Winners of the A ‘Interior Space, Retail and Exhibition Design Award