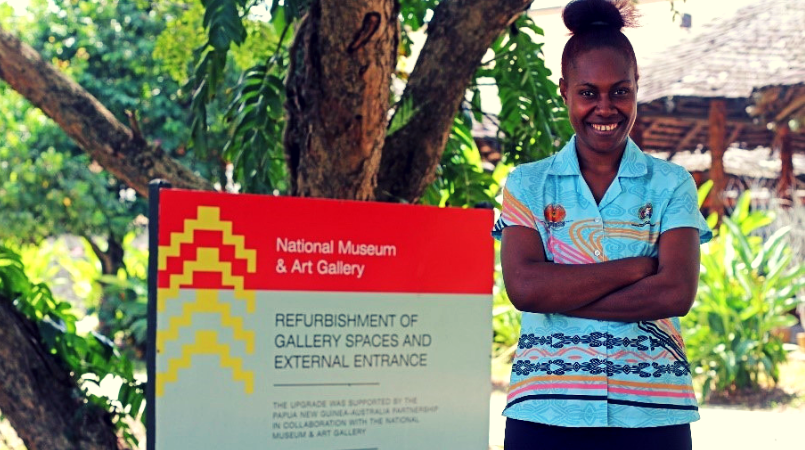 More visitors to the museum, the art gallery

As the public relations manager for NMAG in Port Moresby, Andy plays a vital role in promoting the museum to local and international visitors as an institution of knowledge and cultural identity.

“NMAG preserves over 100,000 objects and it is my job to attract visitors to the museum, so that they can learn more about our country and enjoy the various objects on display,” she said.

“As part of the education and public programs section of the museum, I work with graphic designers, photographers, audiovisual artists, education officers and gallery attendants. We are the face of the museum and are responsible for selling the product.

The 28-year-old from the village of Matupit in eastern New Britain received a Bachelor of Arts degree from the University of Papua New Guinea (PNG) in 2015 and was first hired by NMAG as an exhibition agent before assuming the PR role one year. later.

Andy was recently one of 30 communications professionals from government departments and civil society organizations who completed media training in Port Moresby, with support from Australia through the Media Development Initiative ( MDI).

Since training, Andy has been keen to apply the skills she has learned to raise the profile of the museum.

“The training taught me effective planning and focused key messages, which were previously lacking,” said Andy.

“You have to speak the same language and make sure that what you are saying is clearly received by your audience. People working in public relations and communications have a responsibility to share knowledge, tell the story and are a key part of the larger plan of the organization.

After an extensive renovation funded by Australia, the museum reopened to the public in November 2018 and has since welcomed an average of 1,400 visitors per month.

Resolute Andy and the NMAG team are now embarking on a broad communications and marketing strategy to increase local and international visitors by 40% next year.

“We aim to increase our social media presence and improve our current school programs, which target elementary schools in the city,” says Andy.

Since 2018, MDI has supported the growth of more than 200 media and communications employees across the country. One of the main goals of the program is to develop the skills of journalists from the National Broadcasting Corporation and other media organizations to create content that faithfully reflects PNG society and includes all citizens.

“The media provide citizens with a range of platforms to express their views and to facilitate government responsiveness. We want more citizen voices to be heard and give leaders the opportunity to respond to those voices, ”she said.

For Andy, she believes her role at the museum connects people to the country’s rich culture and history, providing a basis for future development.

“I want more Papua New Guinea to know the history of their country. I believe that in order to know where we are going as a nation, we have to know where we came from. The museum provides this platform. He acts as a guide for a young nation striving to develop.

(Emma Andy says that with better planning, the museum aims to increase visitor numbers by 40% next year)