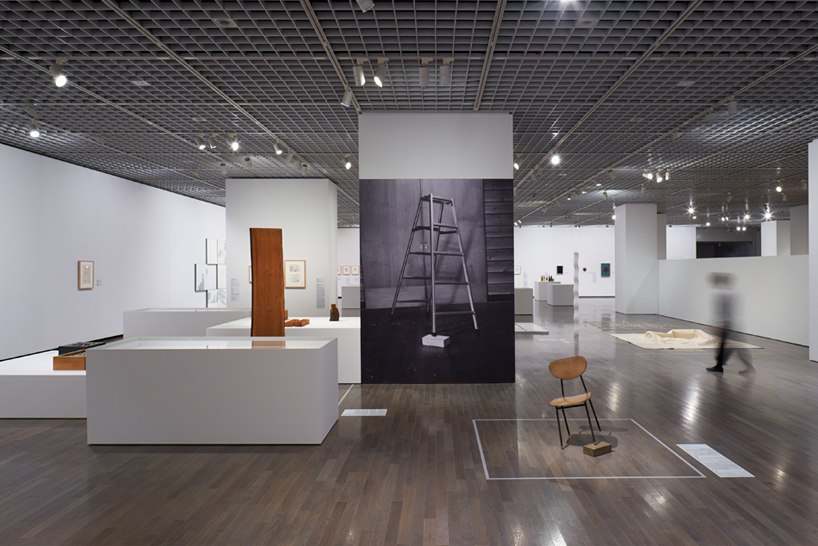 in the conception of the scenography of the retrospective jiro takamatsu (1936-1998) at tokyo national museum of modern art, torafu architects wanted to create an elevated exhibition space that invited visitors to walk through its heritage.

curated by kenjiro hosaka, mika kuraya and tomohiro masuda, who oversaw the first, middle and last chapters in the Japanese artist’s life, torafu architects prepared a scene for the “mysteries” which presents the stylistically heterogeneous work of takamatsu in a way that brings forward the disruptive, yet at the same time playful, nature of his interventions – surrealism being a notable influence on his part.

visitors are welcomed to the exhibition with a “ghost laboratory”
image © the estate of jiro takamatsu, courtesy of yumiko chiba associates

the exhibition opens with a “shadow laboratory” which takes the form of a long and narrow interactive installation which highlights the middle part of his artistic practice. this area includes superimposed shadows cast by various light sources, such as the silhouette of a rotating chair, depicted through various themes. 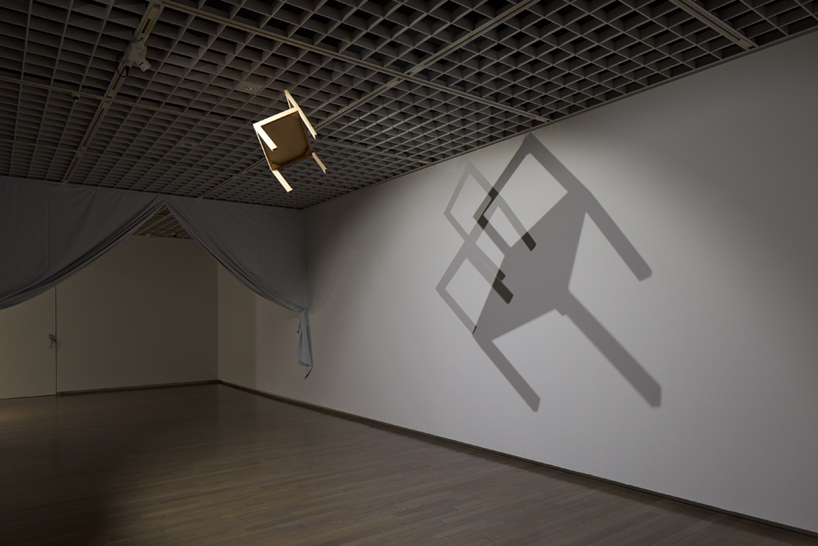 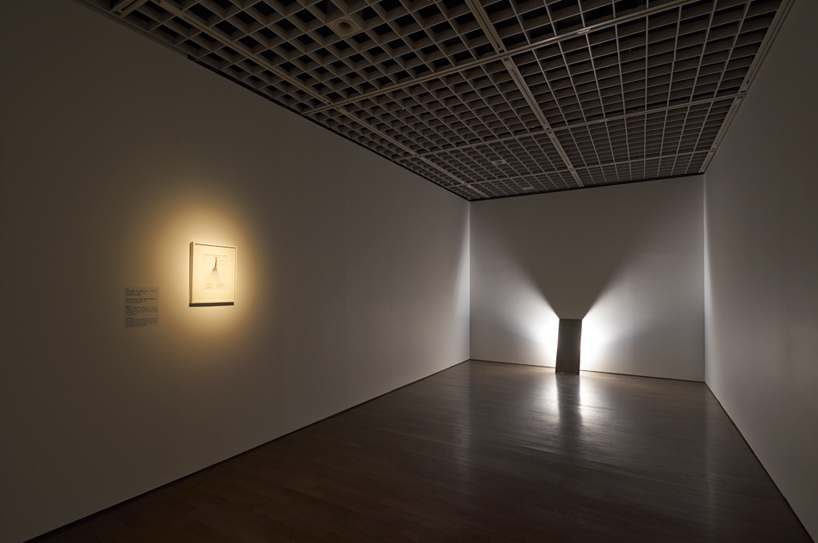 Through this hall, visitors are led into the main exhibition space which is defined by six columns of varying circumference. these volumes are set up to give an architectural atmosphere to the gallery, while minimizing their presence as structural elements. Dotted across these main vertical supports, the architects of torafu installed five pseudo-pillars of the same width in their spacing, which are used as screens for the exhibition. these volumes of different sizes help define each thematic section of ‘mysteries’, which is achieved through their placement by filtering out adjacent areas. 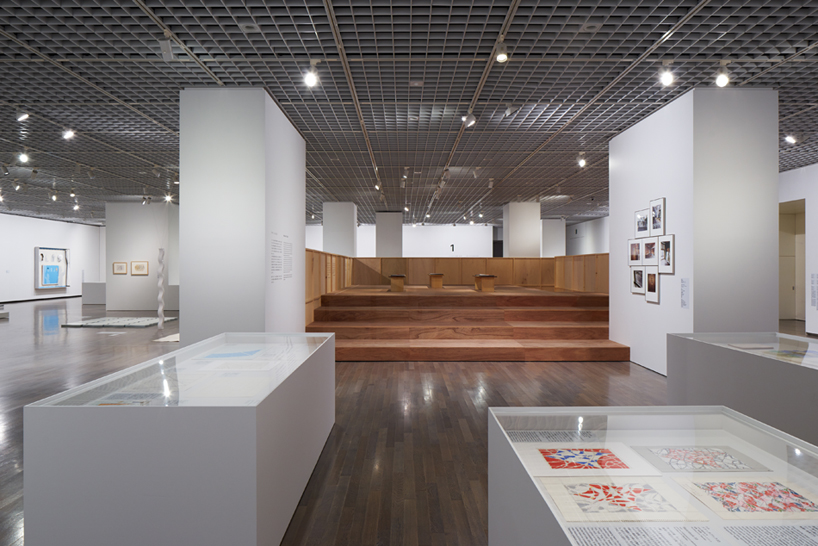 the final element of the exhibition design is a ‘stage’ located in the center of the space. this platform is characterized by wood accents reminiscent of the takamatsu workshop, which offers a vantage point from which the works on display can be viewed from a different perspective. Within the vertical barrier of the stage, quotes from the artist can be found, which recall the various themes he addressed throughout his creative practice. this scene is intended to serve as a rest area where visitors are invited to browse illustrated books, while seated on cushions that feature reproductions of his sketches which are from the latter part of his career. the dimensions of this architectural element reflect the dimensions of takamatsu’s workshop, where he actively worked. 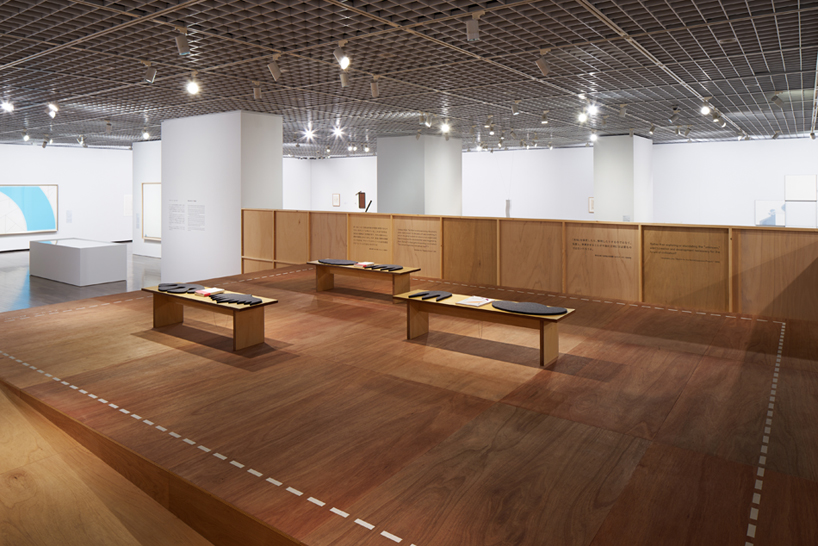 the “scene” measures the same dimensions as jiro takamatsu’s studio where he actively worked
image © the estate of jiro takamatsu, courtesy of yumiko chiba associates

‘mysteries’ features around 200 works by jiro takamatsu, which are presented in a way that allows visitors to experience his philosophical world, while trying to resolve the elusiveness that is expressed in his art. 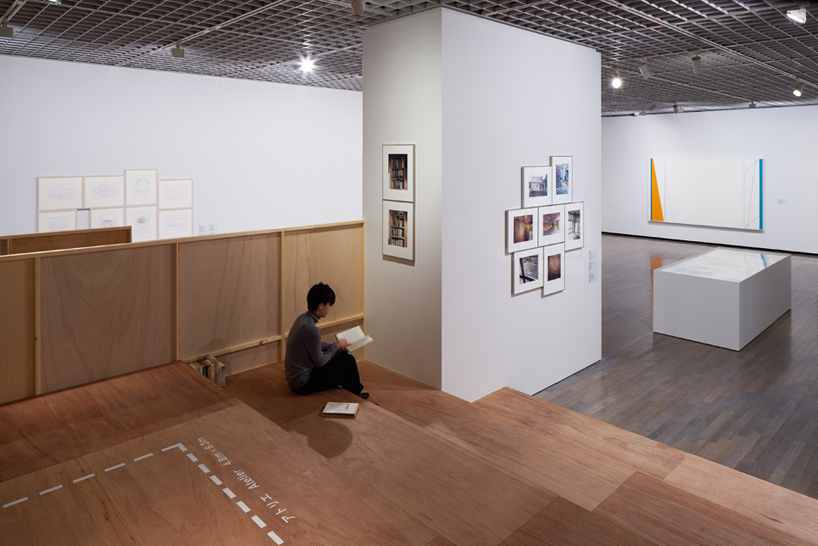 the “stage” offers a place where visitors can rest
image © the estate of jiro takamatsu, courtesy of yumiko chiba associates 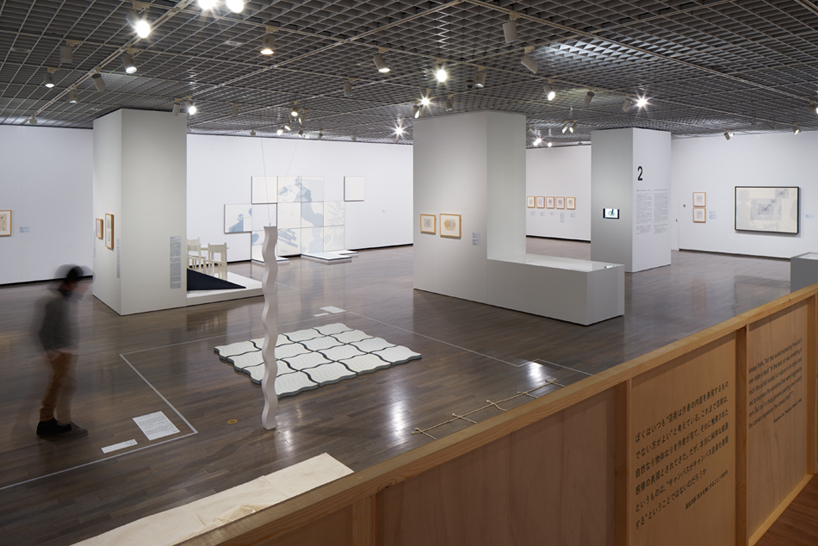 general view of the exhibition
image © the estate of jiro takamatsu, courtesy of yumiko chiba associates 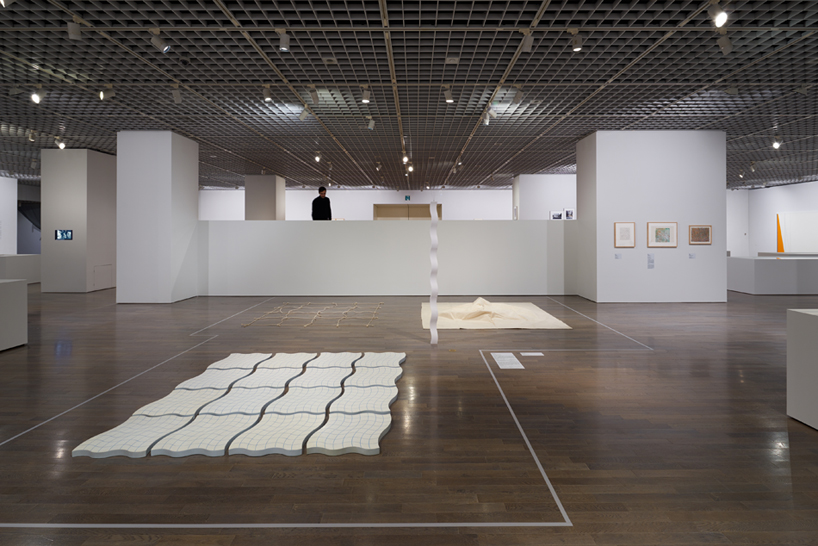 the stage is bordered by a low wall
image © the estate of jiro takamatsu, courtesy of yumiko chiba associates 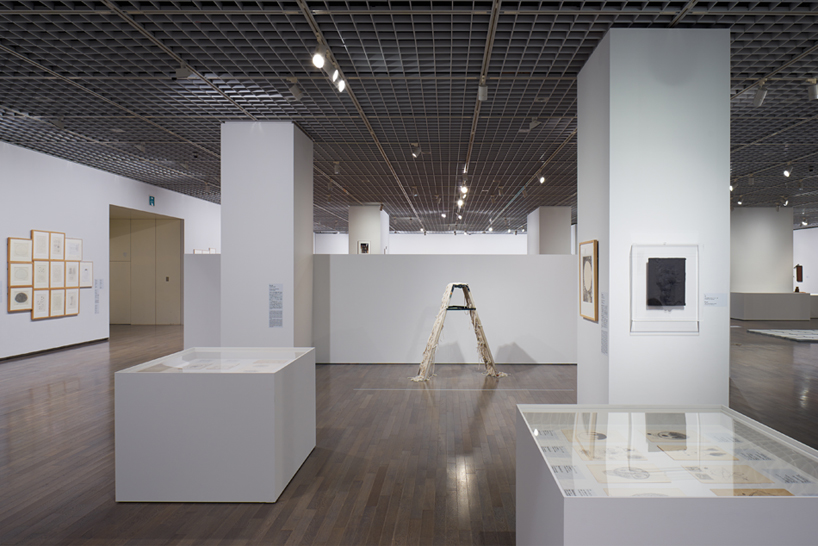 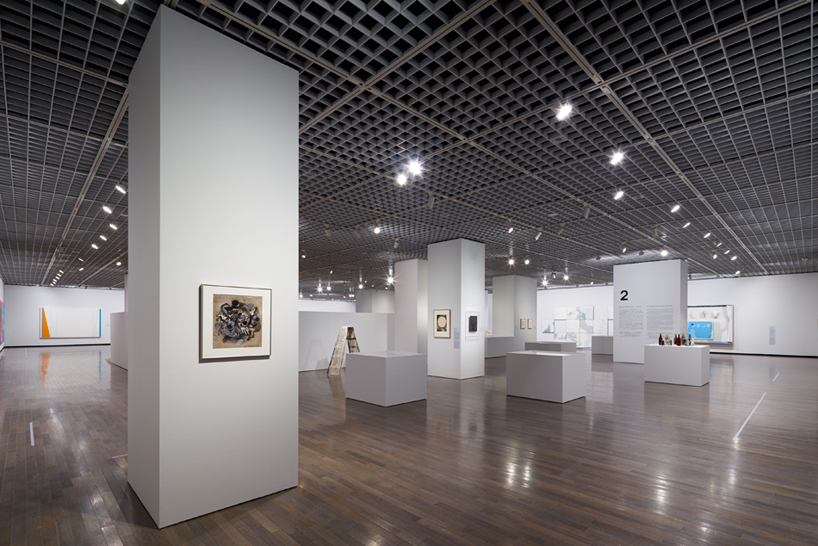 jiro takamatsu: exhibition of mysteries at the national museum of modern art in tokyo
image © the estate of jiro takamatsu, courtesy of yumiko chiba associates 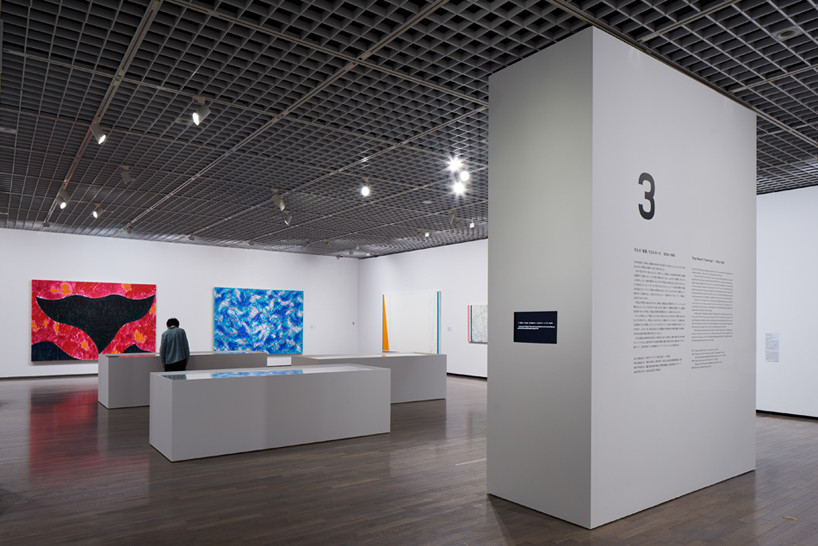 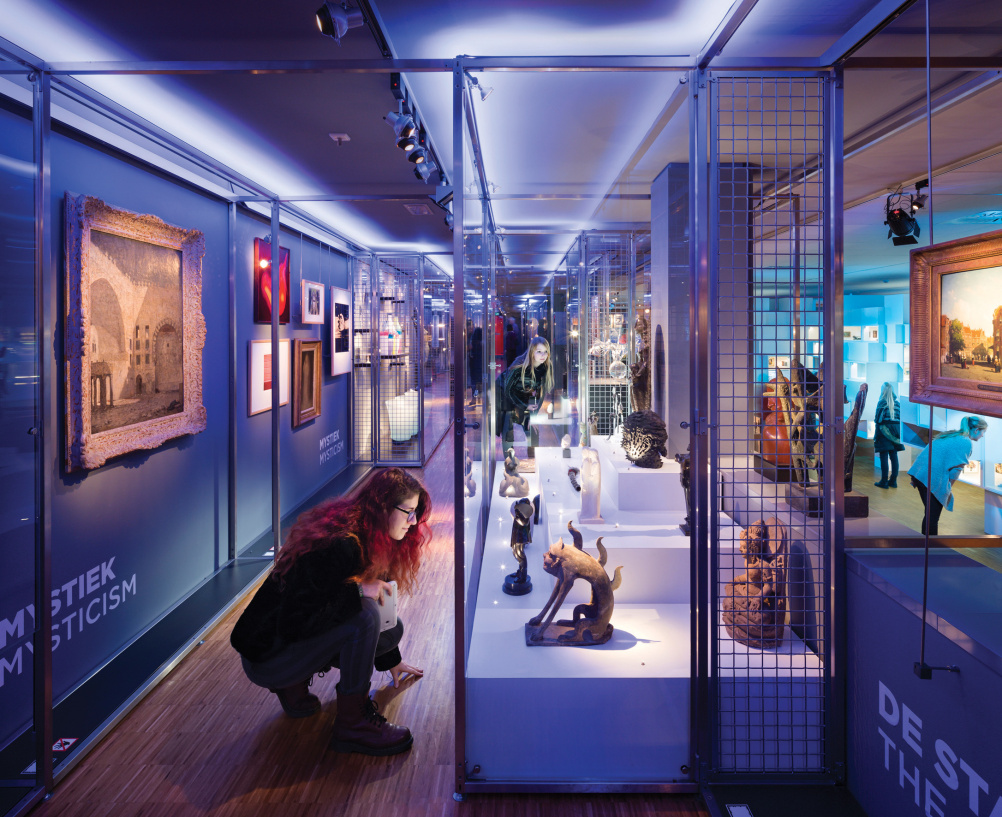 Kossman.dejong created the Danish National Maritime Museum exhibits in an underground space surrounded by a former dry dock. The galleries have irregular shapes, with continuously sloping floors and ceilings. The narrow spaces are used to evoke the oppressive atmosphere of wartime, while the wider and open spaces evoke the sea or contemporary globalization. The exhibition also uses 3D film installations and portholes transformed into showcases.

Masterpieces of Chinese Painting 700-1900 for the Victoria & Albert Museum, by Stanton Williams

The V&A exhibition brings together the finest examples of Chinese paintings from a period of 1200 years. The design had to cater for two main types of artwork: hanging scrolls displayed vertically and manual scrolls displayed horizontally. Some rolls were up to 15m long when laid out. Long horizontal display cases accommodated manual scrolls, while vertical display cases were integrated into the walls. The exhibition also aimed to evoke Chinese architecture through the use of courtyards, thresholds and views through the rooms.

Wonderkamers at the Gemeentemuseum in The Hague, The Netherlands, is designed as an exhibition specifically aimed at teenagers. Kossmann.dejong updated the design he originally created in 2005. The revamped Wonderkamers exhibit is designed as a physical and virtual 3D game. Each room is designed around a specific theme, and the Miniature Museum centerpiece allows kids to design their own virtual museum room, using hundreds of miniature works of art by international artists.

This is the centenary year of the Titanic’s maiden voyage and to commemorate the glory and tragedy of the cursed ship, the world’s largest exhibition has opened in the city where it was built.

“It’s not a simple case of Belfast building a ship and the ship sinks, it’s a story about the people who built the ship.”

Titanic Belfast was designed to tell the story of not just a ship that sank, but a time and place where shipbuilding was rife and the economy healthy.

The three-dimensional space traces the growth of the Harland and Wolff Shipyard, the lives and times of the people who built the Titanic and the passengers who sailed on it.

James Alexander, CEO of exhibition design consultancy Event Communications, tells designbuild-network how his team took over Edwardian Belfast and the story of the world’s most famous passenger liner, and how they created an environment that resonates with various audiences around the world.

What prompted you to get involved in the Titanic Belfast project?

Jacques Alexandre: I think the fact that it’s Titanic makes it pretty special.

I think doing something on the Titanic in Belfast, which of course is where the Titanic was built, is pretty special too.

There are other Titanic exhibits that have opened recently – one in Southampton for example – but there is something about developing a Titanic story in your hometown.

It was always going to be very attractive. One hundred years ago Belfast was a very important city. In fact, it was one of the most important cities in the Commonwealth and was comparable to Liverpool and Glasgow in terms of shipbuilding.

How is this particular project different from your previous exhibition designs? JA: It did not differ greatly. Our job as exhibition designers is to deliver stories and narratives – that’s what we do for a living, so in this case it was the story of Belfast and the Titanic.

How did you create a space that tells the story of the Titanic while creating a visual representation of the liner?

JA: It’s called the Titanic Exhibition, but in fact we also tell the story of Belfast. So we were wrapping a larger story around the ship, giving it a broader base of interest.

There are nine galleries and we have created in each of those galleries a narrative that unfolds chronologically, so when you enter the first gallery you enter Edwardian Belfast and the streets of the city and you travel through these streets, which illustrate what it was. be in Belfast at that time.

Then, you go through the design offices, the shipyard, the launching, the fitting out, then after the sinking of the Titanic, we advance the chronology towards the question of myths and legends and the discovery of the ship in the 1980s.

What materials did you use to mimic the original interior design?

JA: All kinds. One of the things about this project is that not 100 years ago it is not a huge amount of time and the records of the Titanic and its sister ships, the Olympic and the Britannic , all exist.

“Our job as exhibition designers is to deliver stories and narratives – that’s what we do for a living, so in this case it was the story of Belfast and the Titanic.”

So we recreated, in several ways, the interior spaces that include three scale models of the first class, second class and third class cabins, and we had enough detail to be able to do it very precisely.

We also created what we call a 3D cave, which people can enter and take a trip through the Titanic, from the boiler rooms to the Captain’s Bridge. With all these things we have used modern technologies and modern materials, but they are based on the reality of the designs of the first decade of the 20th century.

We don’t have a lot of collections of objects like in a museum, so we have to create immersive environments using moving and still images and we project this on a large scale to give a sense of presence. We also have a ride, which takes people through the shipyard as the Titanic is being built in different stages, such as the laying of the keel through to the plating and riveting process.

Did you feel under pressure while designing this exhibit, knowing the tragedy behind the Titanic and the number of lives it touched?

JA: I do not think so. Obviously it was a tragedy, but it is a well understood tragedy and I think a lot of what we are dealing with may have tragic elements. For example, we worked on the Imperial War Museum.

I think what we were very aware of was making sure that when we tell the story, people engage in it emotionally, on all kinds of different levels. It’s not a simple case where Belfast built a ship and the ship sank, it’s a story about the people who built the ship. This is the very personal history of Belfast and if you go to the Titanic exhibit what you will see is a huge effort to unravel personal and human histories and it is very, very important, because people s ‘identify with people.

We were certainly aware that we fully understood the facts, but I wouldn’t say we were worried because most of our clients are museums and when working with museums you can’t go wrong.

How did you decide which elements of the ship to include in your design and which individual stories to tell?

“There are nine galleries and in each of those galleries we have created a story that unfolds chronologically.”

JA: What we did at the start of the process was write a narrative for the exhibit and as that developed we made appropriate judgments about which part of the ship, or process, we wanted to highlight.

So in the journey, where we illustrate the construction process, we created part of the Arrol portico, which is the scaffolding in which the titanic sat during its construction.

But, as far as the layout of the components goes, this is where we have reconstructions of the cabins, for example, so it depended on how the story unfolded.

How long did it take you to research the Titanic to make sure the content of the exhibit was fact-based?

JA: We started in 2004, so we’ve been working on it for quite some time and of course it intensified during the design process. In Belfast there is a Titanic company that involves family members of the passengers and we have spoken to these people, but we have also set up an ‘expert group’ to help us make sure that the stories we we had were factually correct.

What were the main challenges you encountered during the project? Titanic Belfast was designed to tell the story of not just a ship that sank, but a time and place where shipbuilding was rife and the economy healthy.

JA: The timescale was the main challenge. Although we had been working on the project since 2004, it only got the green light in 2010, so once we finally got the green light, there was a lot to do. It took so long because we started by doing various feasibility studies plus the total cost of the project is £ 97million and collecting that kind of money took a while.

Explosion protection and CBRN filtration systems for the design industry