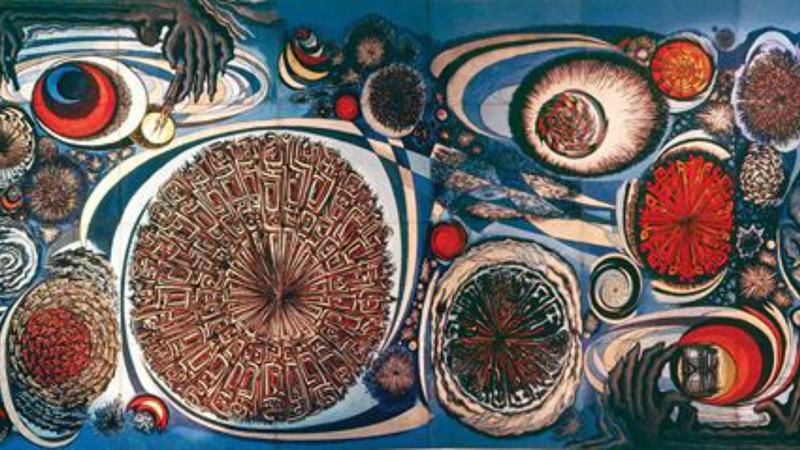 One of 16 restored panels of Sadequain’s “Evolution of Humanity” mural as well as an unrestored panel will go on public display on March 1 at the Lahore Museum.

The ceiling of the central gallery of the museum had been decorated with a mural made by the legendary artist in the 1970s. This work of art is world famous and consisted of 48 panels.

Due to the vagaries of the weather and termite attacks, the mural had suffered severe damage. In 2008, a grant was approved by the Governor of Punjab to initiate restoration work on the fresco.

Artists Uzma Usmani from the museum and Mumtaz Hussain from the private sector were then sent to the Indian National Trust for Art and Heritage in New Delhi for basic training in oil painting conservation for three months.

Later, the artists managed to restore 16 panels in three years, while the restoration process was ongoing on the remaining panels.

Uzma Usmani told Dawn that out of 48 panels, 16 had been restored. “The restoration of the fresco is a long, slow and delicate process. This must be done with great care, which is why the rest of the panels can take six to seven years to restore.

Lahore Museum Director Humayun Mazar Sheikh said one of the 16 restored panels and one unrestored will be displayed at the museum on March 1 to raise awareness of the restoration work.

Additional director Naushaba Anjum said the mural could not be attached to the ceiling of the central gallery because its panels had become heavy due to the restoration process.

“We would have to look for a special corner in the museum to display this mural after the restoration.”

The Lahore Museum is also organizing a pictorial exhibition on March 8 on the occasion of International Women’s Day. The exhibition will present photographs from before the partition as well as from recent times.