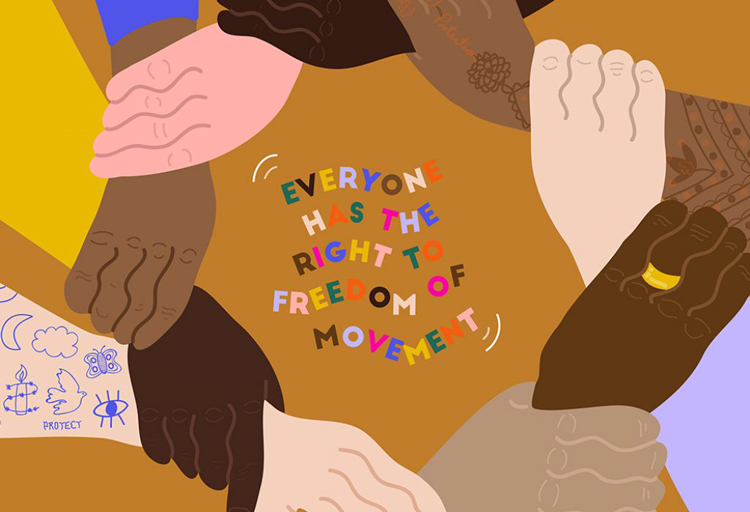 This year marks the 70th anniversary of the Universal Declaration of Human Rights – a document drawn up in 1948 after the tragedies of World War II, which sets out the minimum standards of living to which everyone should be entitled.

The purpose of the declaration is that their rights are intended to be protected and held by everyone universally. Although it is not a legally binding document, it has been signed and accepted by almost every country in the world, and for this reason, it has been translated into over 360 languages.

But despite this benchmark for human rights, violations of the declaration have occurred regularly over the past 70 years and continue to occur all over the world.

The slave trade and the trafficking of women and children in several African countries; the inhuman torture of prisoners in GuantÃ¡namo Bay, Cuba; wars that have seen thousands of civilians killed in countries like Afghanistan, Syria and Iraq; human rights defenders and journalists killed for expressing their views; these are just a few examples of indecent reporting violations.

The global human rights charity Amnesty International seeks to recognize and expose cases where people’s rights are violated and to fight and prevent existing and future violations.

Its latest awareness campaign is an exhibition, created in collaboration with Riposte, an independent print magazine that advocates for women and non-binary individuals.

30 artists watch our fight for equality

The week-long show, titled Protection, takes place this week at King’s Cross’ Coal Drops Yard and features graphic prints created by 30 female and non-binary artists, illustrators and designers, all of whom meet the 30 UDHR articles in somehow.

Danielle Pender, editor-in-chief of Riposte and curator of the exhibition, says this new exhibition contributes to Riposte’s role within the Amnesty Collective, a group of artists, publications and activists who seek to spread the messages of the association’s campaign with their various audiences.

She adds that she chose the show’s 30 artists with the aim of bringing together “a broad generational spectrum and a range of artistic styles”, so she opted for established artists and young and up-and-coming artists.

â€œWe turned to people we’ve worked with before, artists, designers and photographers whose work we admire,â€ she says. â€œWe also made sure that the artists involved were a global mix, to reflect the myriad of ways we are affected by human rights issues.

Contributing artists include Guerrilla Girls, Hattie Stewart, Kelly Anna, Nathalie du Pasquier and Esther Mahalangu, and themes explored through their work include freedom of movement, protection of women’s rights and our bodies, freedom of expression. , access to education and the collective need to watch and protect each other. Artistic styles range from purely typographic, graphic and illustration design to photography, hand drawing and doodling.

Some pieces are more specific, such as the Guerrilla Girls’ brutal analysis of the inhuman conditions to which the homeless are subjected, while others are more abstract and have more positive connotations; Manuja Waldia’s colorful take on Black, Asian and Ethnic Minority (BAME) women suggests community and warmth.

Some impressions are “personal” reactions

â€œSome artists reacted to the UDHR articles, and some envisioned a more personal response to the theme of ‘protection’,â€ she said. â€œWe asked them to do one of those two things, because as Eleanor Roosevelt said in her speech on the 10th anniversary of the Declaration: All universal human rights begin in small places, close to home.

All contributing artists are female and non-binary, which Pender says reflects Riposte’s editorial direction but does not limit exposure to gender issues.

â€œWe are passionate about offering a platform for [female and non-binary] voice, whether in the magazine or as an exhibit, â€she says. â€œSome of the work featured on the show comments on women’s rights and gender issues, but many pieces examine human rights across the gender spectrum. “

The exhibition runs until December 16, 2018, where all prints can be purchased by visitors for Â£ 50 each, with all proceeds going to Amnesty International. Prints can also be purchased online.

A free print publication edited and designed by Riposte and printed by the Newspaper Club will also be launched at Protection, which is a reproduction of the UDHR and its 30 articles. At the same time, a series of conferences will take place, particularly on gender and the family.

“The fight is not over”

While encouraging people to understand how art and design can bring global issues to life, the show ultimately seeks to inspire people to take a greater interest in human rights and their regular violations.

“We want to raise as much money as possible for Amnesty because we believe the work they do is extremely important at a time when human rights continue to be under attack by powerful political bodies which must be held accountable” , Pender said.

â€œI want visitors to have conversations about the issues covered by the UDHR and inspire people who visit the exhibition to take action,â€ she adds.

â€œGlobally, there has been a wave of movements for our rights, from #MeToo and #TimesUp to the fight for the right to abortion,â€ she says. â€œActivists continue to achieve important human rights victories, but the fight is not over.

“Those in power violate our human rights, intimidate and silence those who defend them,” she adds. â€œWhen more people speak out, our voices get louder and more powerful. “

Protection lasts until December 16 at Coal Drops Yard, Lower Stable Street, London N1C 4DQ, with the sale of prints ongoing until then with all proceeds going to Amnesty International.

All prints are available for purchase for Â£ 50 from the exhibition itself and online here.

The exhibition was produced by The Print Space. The exhibition is free, but all conferences and events are chargeable. For more information, visit here and here.