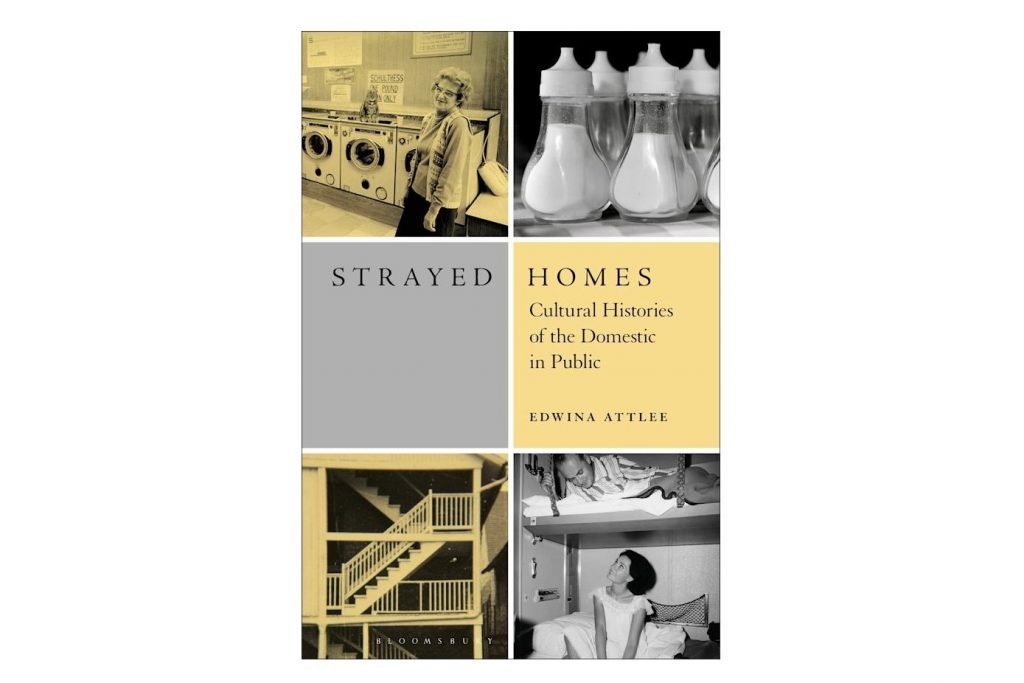 Strayed Homes – Cultural Stories of the Domestic in Public, by Edwina Attlee

lost houses is a serious study of seemingly banal everyday spaces and practices. What more could you ask for from a feminist collective? Edwina Attlee’s thoughts on domestic rituals in public are close to our thinking in more ways than one. Some of our group’s meetings took place in the foyer of Festival Hall, which Attlee analyzes as functional and social, a space containing different speeds, in which people move but where they are also free to sit and watch the world go by (or, in our case, come together on laptop screens).

Attlee takes a stand against the kind of intimacy associated with family life and against a certain kind of invisibility. As she writes, “to be seen cleaning, or sitting still, going slow, eating when hungry, resting when tired should not be remarkable or shameful.” Her book can be seen as filling a gap in history by writing about spaces where such practices take place.

lost houses begins with an introduction to the Jewish structure (as well as the concept) of eruv (“the practice whereby an area outside the home is temporarily redefined by halakhic law as part of the home”) and then proceeds to the establishment of the theoretical bases of the research by introducing the reader to the key concepts of the writing of Roland Barthes, Michel de Certeau and Gaston Bachelard. This section of the book is geared more towards those with a theoretical background and sparked a discussion between us about the accessibility of academic language during our journal club conversation.

The four main chapters are categorized by spaces that Attlee investigates via archives, anecdotes, films, and broader popular culture. These are: laundry, bunk, fire escape and grease spoon. The conclusion was written during the Covid-19 pandemic and it appears the extra time provided a comfortable vantage point from which to assess the research.

Encouraging reading for architects who feel stuck in regulations and requirements and wish to rediscover spaces as places of practice, movement and memory

We liked how Attlee approached privacy with all its associated rules, and how they are so constructed and flimsy. We were captivated by the links forged between the eruv and the wandering houses of the laundromat and other spaces. If, as Attlee writes, “to poetize is not to elevate but to interpret so as to alter”, then his writings on the eruvim were exactly that – it made us think of them differently, want to go see one with ours. the eyes; it changed our understanding.

The approach in lost houses is certainly poetic, but it is also discreetly political. A statement at the very beginning of the book, that “rest beyond the space of the home is a political issue,” resonated with the designers in us. Attlee is referring here to the work of Raquel Meseguer and Jos Boys, both of whom are interested in how non-conforming bodies occupy spaces.

The chapters forming the main body of the book are meticulously documented and provide a multitude of references, from Louis Althusser to the popular sitcom Friends (where many memorable scenes took place outside the apartment, on the fire escape). We reveled in discovering little-known facts (such as fire escapes were once common, parked on street corners and transported to a particular house in the event of a fire) and better understand the spatial history of labor reproductive, such as the job of doing the laundry.

What we perhaps enjoyed most was how Attlee deconstructs the dichotomies between private and public. The phrase “elongated thresholds” signals the blurring and complication of established boundaries of what is considered domestic. Central to the book is the idea of ​​inverting the concept of privacy – of privacy invasion instead of privacy as something to be protected from intrusion. It is important to note that the author does not romanticize domesticity or reproductive work. His “misplaced houses” are practical and social; spaces to rest, eat and dream in equal measure. The boundaries between domestic and public are stretched and rethought, but they also tend to be socially controlled, as Attlee shows through his explorations.

lost houses provides valuable insight into spaces as they are occupied and used; a type of inquiry that is rare in the history of architecture, which tends to concern mainly designers. It would be encouraging reading for architects who feel stuck in regulations and requirements and wish to rediscover spaces as places of practice, movement and memory; and for anyone who enjoys cultural history written with care and attention to small details, anxieties and pleasures of life in buildings.

Edit’s current research project, Honey I’m Home, focuses on home design and how the layout and contents of our homes have the power to influence and maintain established gender roles. and the family. Follow Edit on instagram and Twitter.