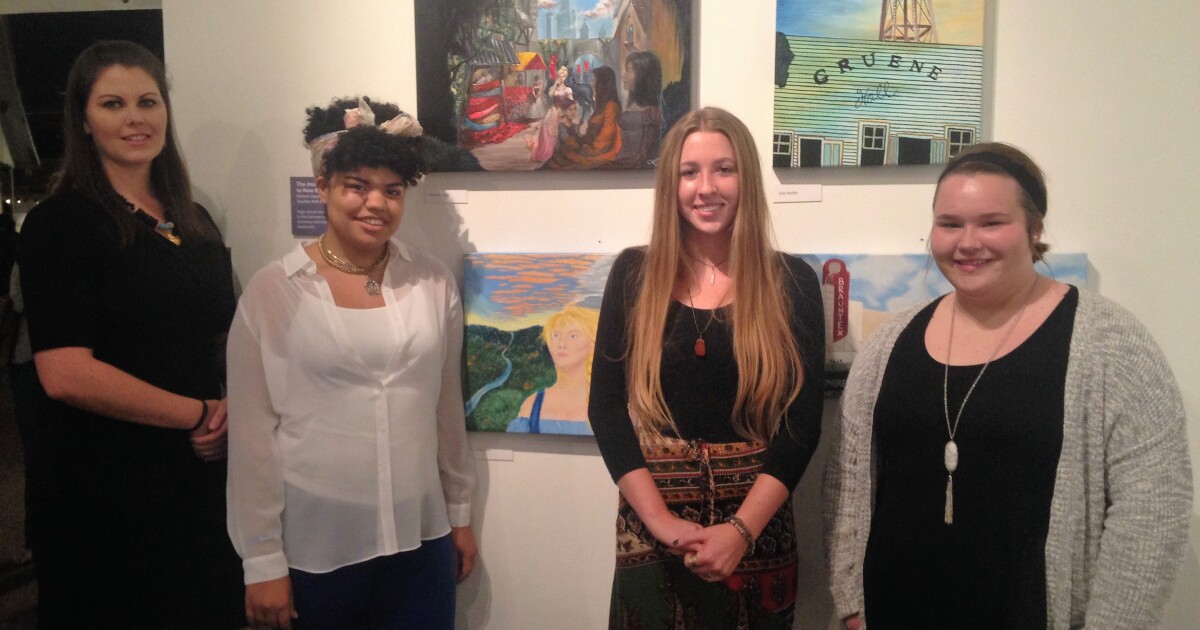 It’s not often that five-year-olds see their art displayed in a museum. At the Institute of Texas Cultures, 250 Comal County K-12 students now have their artwork featured in an exhibit that celebrates New Braunfels history and heritage. TPR’s Louisa Jonas reports that a lot of work has gone into the multimedia show.

Nell Anderson is an art teacher at Canyon Lake High School. Today in art class, his students work on sculpture. Anderson says four of her students want to be art teachers, so she shows them lesson plans and even gets their input on instructional videos. Kyli Lowrey is one such student. She throws a ball of clay back and forth between her hands. “It’s recycled clay,” Kyli says. “You can make something out of it again. So there are air bubbles inside. This is where you take old clay and make it that way. So when you wedge it, you’re trying to get the air bubbles out. And the clay is a bit sticky because you add water to the old clay to make it malleable again, so we get rid of the air bubbles and make it less sticky.” Anderson helped four of his students to prepare their paintings for the institute show “If a student takes the time to create something, they put a part of themselves into that work of art“, says Anderson. “And me, as a teacher of art, I’m going to give them techniques and ways to improve the composition on a technical level. And then, beyond that, it’s my job to make it known in the community. Asia Giles is the one of Anderson’s students whose painting is in the exhibition. She is a senior. “I made a German woman who looked to the future and left the past behind her where everything was a bit dead, and looked towards very fertile land and just a better place in her life,” says Asia. In Asia’s painting, a blonde woman stares into an orange and blue sky. The sky behind his head is cloudy and the land behind his back is barren. Opening Monday night at the institute, people crowd into the gallery to view the students’ artwork. Michelle Engel is an art teacher at Canyon Middle School. Her students created colored pencil drawings of the Grimm Brothers fairy tales set in New Braunfels. “I love seeing their artwork in a professional setting “, says Engel. “It’s very exciting for me and for them. Normally we only see their art in our hallways or in a cafeteria, but having it in a museum under the spotlight is just fabulous.” Mia Taglia is one of Engel’s students and an eighth grader. In her cartoon, the Evil Queen gives Snow White the apple outside Naegelin’s bakery. Mia recently moved from New Jersey to New Braunfels. “Actually, I didn’t know it was a German town based, so I found out it was so crazy, because I’m German, so I really looked into it,” Mia says. “And I found out more fairy tales from the Brothers Grimm that I didn’t know not even that they were from them And I learned that Naegelin’s is the oldest bakery in Texas and how much they contribute to the community and stuff like that, and how great they are. Kira Richey is also one of Engel’s students and is in eighth grade. She chose Snow White and the Seven Dwarfs and her drawing is a close-up of Snow White’s arm, limp, on the floor. Just out of reach is the shiny apple.”I learned how to draw the hand, because I had to research how to draw the hand, because the first time I tried it was really bad,” Kira says. “And I also used those little bits to stain the floor because it made it look cleaner, shinier. I’m really proud of it because there’s a real sense of accomplishment. This means that all that practice has paid off. The practice paid off for many students tonight. The artwork hangs in the gallery with professional lighting and the opening is full of people. The exhibition will be on display until February 12.