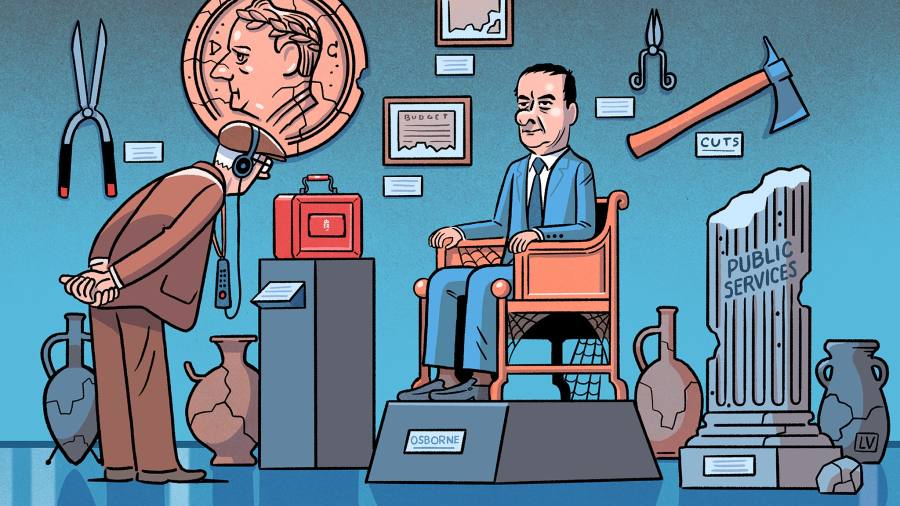 Political and cultural, London is buzzing with news that archaeologists have uncovered amazing relics from a lost era that will now form a major exhibit. News of the find came with news that a fully intact George Osborne, the former chancellor, had been found under a pile of cash at a boutique investment bank.

Osborne has now been installed as the centerpiece of a new display at the British Museum, among other fossilized remains of the Cameron government. The find is so significant that Osborne was even made president of the museum, a ceremonial role that is mostly about fundraising and refusing to return the Elgin Marbles to the Greeks.

Finding Osborne, who had been entombed in a gold-edged office surrounded by artifacts of his past greatness, gives historians a complete picture of Cameron’s lost government, a once powerful regime that disappeared almost overnight and whose heirlooms and treasures have been purged from the official. History of the Conservative Party. David Cameron’s now-lost civilization was then considered a time of great enlightenment, liberalism and modernity – as long as you weren’t dependent on public services.

Historians date the period from around 15 BB (pre-Brexit), also known as 2005, when the mythical Cameron took over the leadership of his battered tribe, to June 4 BB, or 2016, when an election Vesuvius condemned the prime minister.

Cameron disappeared, although Tory ministers were sometimes subjected to a firestorm of texts on something called supply chain finance, which none of them understood. The disappearance was so complete that many members of Boris Johnson’s last government took to talking about the Cameron administration as if it were that of a different political party. The exhibit will feature the Shepherd’s Hut to which the politically broken Cameron retreated after his Brexit defeat to write his memoirs, nearly all copies of which survive with his publishers.

There will be a showcase highlighting High Speed ​​2, but it went over budget and may not open until 2035

But the many values, mostly lost under his successors, are perhaps more important. Visitors will marvel at the policy of rapprochement with China and the badge saying “BFF from Beijing to the west”, which all ministers had to wear when visiting the country and did not talk about the Dalai Lama.

Museum buffs may be surprised to discover that as recently as 2015, the conservative party didn’t hate the metropolitan elite and was keen to give an impression of modernity. There will also be a showcase highlighting High Speed ​​2, but unfortunately it’s over budget and may not open until 2035.

One room is devoted to Cameron’s favorite project, the Big Society. For now, the exhibit is empty, but curators say it was one of Cameron’s ‘big ideas’, so they’re sure it’s only a matter of time before they go. find evidence of its existence.

There is, unfortunately, plenty of evidence of the impact of government austerity policies during this period, but apparently the museum’s new chairman feels there may not be room for it in the exhibition.

Perhaps most notable are the exhibits dedicated to Cameron’s plan to end the Conservative obsession with Europe, which he achieved in a sense, but not in the way he had planned. A poignant piece is German Chancellor Merkel’s handwritten note promising to resist Jean-Claude Juncker’s candidacy for the presidency of the European Commission. It’s in a big folder called “Problems Angela will fix”.

Some were surprised that a government so eager to break with the Cameron era would appoint Osborne to such a prominent cultural role. But the ex-Chancellor, who has held many posts since leaving office, has carefully maintained a good relationship with the Johnson regime, even as he abandoned every policy he ever believed in, on the Obviously wise precaution that you never know where your ninth job is going. came from.

Exploration of loaded stories at the Liverpool Biennale