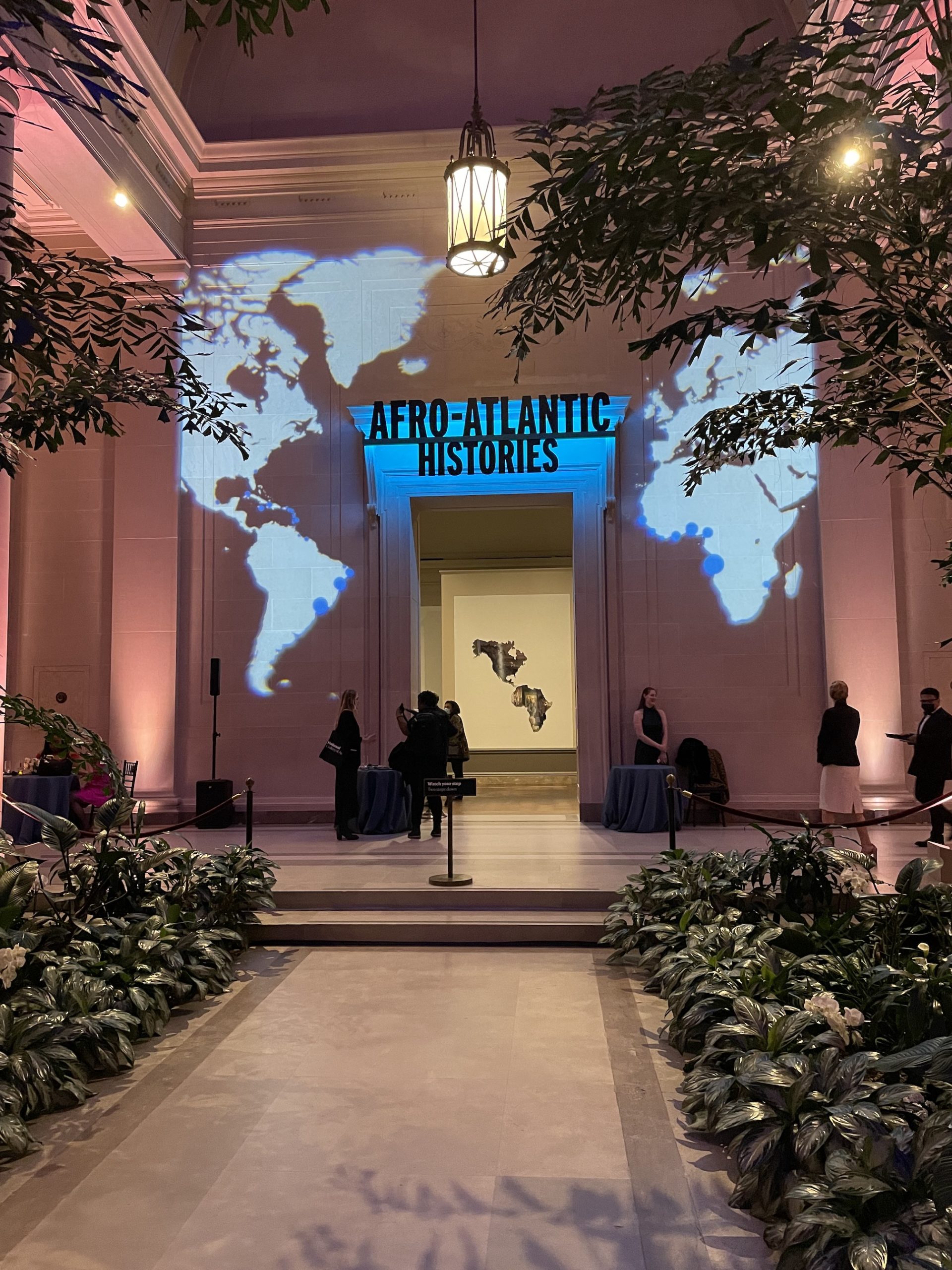 Afro-Atlantic Stories is a unique exhibition. Open to the public on Sunday, April 10, the National Gallery of Art’s highly anticipated exhibition features more than 130 works that seek to tell the complex stories of the African diaspora from the 17th century onwards.

To mark the occasion, the gallery hosted a series of preview events, including a celebratory dinner on Thursday evening. Just hours after the Senate confirmed the judge Kentanji Brown Jackson as the first black female Supreme Court Justice, Vice President Kamala Harris gave a moving speech to those present.

Before the vice president took the stage, the director of the National Gallery of Art Kaywin Feldman reminded the crowd that she was the gallery’s first female director. Cheers broke out. “It’s getting better,” she said with a laugh, introducing the first female vice president.

Calling the exhibit “amazing,” Harris waved to the room, arms outstretched: “This is world history, and this is American history. And, for many of us, it’s also a family story,” she said. “Yet this story is rarely taught in our schools or shown in our museums.”

Spanning multiple halls, the well-designed exhibition curated by Kanitra Fletcher, includes paintings, sculpture, photography, video and mixed media by artists from South and North America as well as Africa, Europe and the Caribbean, i.e. the region known as the “Afro-Atlantic” or “Dark Atlantic”, which was defined by the violent transatlantic slave trade from Africa to the Western world. Drawings and representations of slave ships with the American flag sewn in red, black and green fabric, Afro-Atlantic Stories tries to tell the parts of the story that the capital H story often keeps silent.

“When it comes to European history, the 17th century is often called ‘the Dutch Golden Age'” Caroline Tisserand written on the National Gallery of Art blog. “This era is described as a time of great flourishing, exemplified in part by the luminous paintings of Rembrandt Van Rijn and John Vermeer. Yet do these stories acknowledge that this so-called golden age, which included artistic innovations and great prosperity for some, was also inextricably linked to the massive trafficking and exploitation of African peoples?

Harris, in his speech, acknowledged the pain and generations of trauma caused by the slave trade. The exhibition, she said, will “move” viewers as they walk through the rooms divided into different subjects.

“We will also experience joy in seeing the expression,” Harris added. “It’s been about survival, self-determination, commitment to humanity, commitment to endurance, strength and excellence.”

Originally presented as Afro-Atlantic Stories at the Museu de Arte de São Paulo in Brazil in 2018, Afro-Atlantic Stories is the first major exhibition curated by Fletcher, who joined the National Gallery of Art in early 2021 as the institution’s first Associate Curator of African-American and Afro-Diaspora Art. Fletcher, who gave Harris a tour of the exhibit, also appeared on Friday’s panel alongside artist and social innovator Gates and philanthropist Agnes Gundfounder of the Art for Justice Fund. Darren WalkerNGA Trustee and President of the Ford Foundation, moderated the panel.

“We bask in your glow,” Walker told Fletcher as he opened the panel.

After joking that she was “grateful that I didn’t pass out” with Harris, Fletcher told the Friday audience that she hoped the significance of this exhibit — and the space it takes up — be clarified. Located in the gallery’s west building, which houses works from the 11th to 19th centuries, the space is not known for showcasing artists of color.

For so long, Fletcher said, black people were seen as “contrary” to that story. “These works show how intertwined our stories are.

The parties for Afro-Atlantic Stories are just beginning. On April 30, the museum will host a day-long festival of music, art and food from African diaspora cultures. A series of ongoing films about the exhibition will run through mid-July and concerts, including one by Okaidja Afroso Trio on April 24, are among many upcoming events.