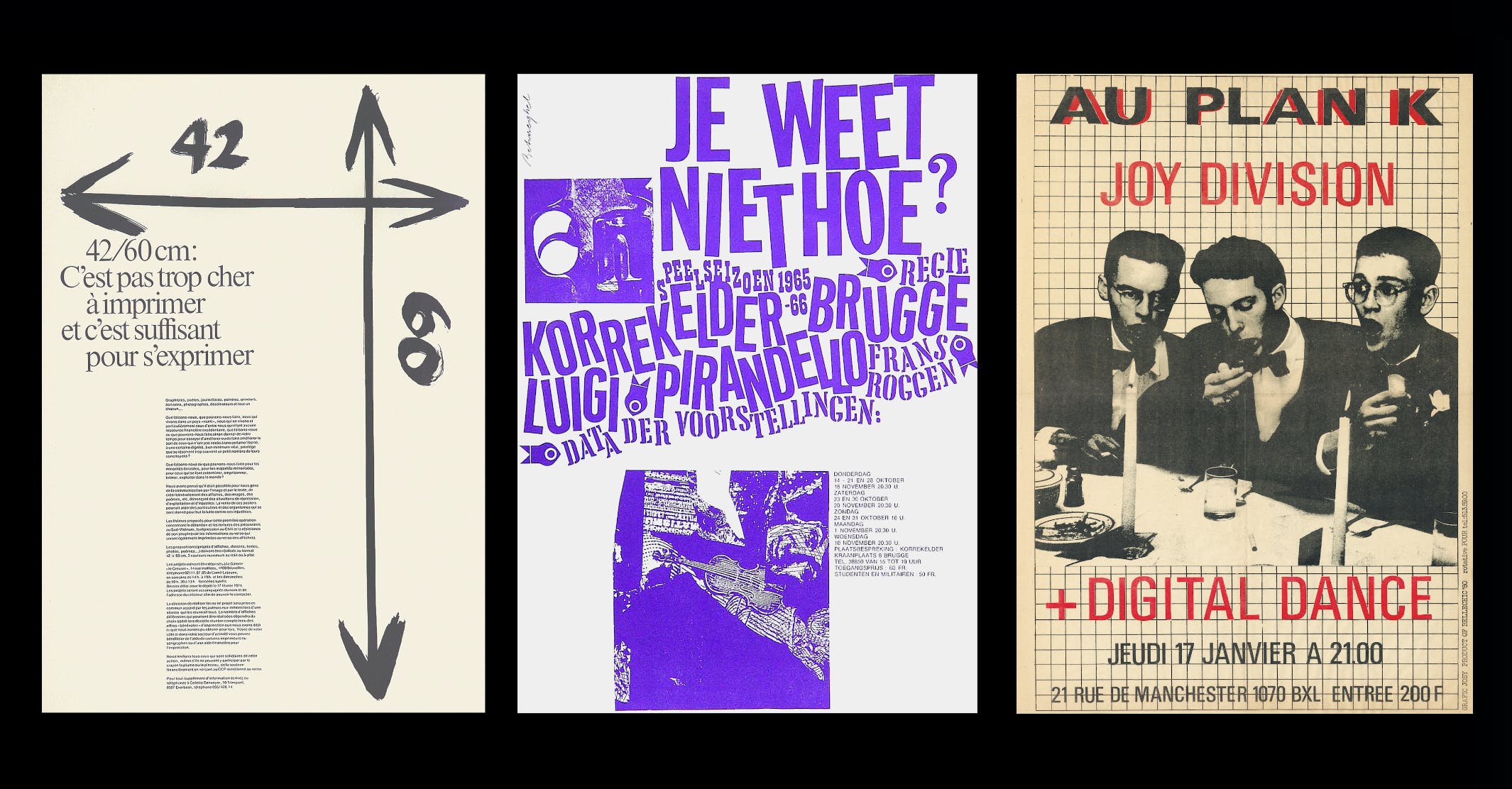 Certain European countries have, over time, become synonymous with a particular style or quality of graphic design: Switzerland is perhaps the most obvious example, while Dutch graphic design has come to connote a exemplary corporate identity work in the 20th century. By comparison, we know relatively little about 20th-century Belgian graphic design, despite a rich and bold history in pushing boundaries through posters, leaflets and other printed ephemera, typography, editorial design, and more.

A new book hopes to change all that. Entitled Off the Grid: Histories of Belgian graphic design and published by Occasional Papers, it follows and develops an exhibition (also entitled Off the Grid) organized by the publisher Sara De Bondt and presented in the Design Museum Gent in 2020.

While the exhibition mainly focused on the origins of graphic design in Belgium in the 1960s and 1970s, the new book goes beyond those decades and traces the country’s design history from the 1920s and even before. at “to offer a collaborative panorama of the history of Belgian graphic design from a multiplicity of perspectives”, as De Bondt puts it.

Hundreds of never-before-seen illustrations such as posters, signage, typography, book designs, logos and archival photographs in Off the Grid are accompanied by essays by scholars, historians and contemporary designers in practice, as well as first-hand testimonies written by some of the key figures in the canon of 20th century Belgian design. Off the Grid also touches on everything from character design to the nuances of working relationships in the design industry and the visuals surrounding Belgian club culture.

Considering its size, Belgium’s contribution to electronic music has been quite staggering; reflected in the witty, playful, and sometimes mushroom-centric club designs featured in the book. In the late 1980s, Belgium gave birth to the “new rhythm”, another type of underground dance sound that later formed the foundations of the country’s house and techno culture. The emergence of new technologies such as synthesizers, sequencers and drum machines in the second half of the 20th century reflects the growth of digital design tools that club graphic designers were keen to experiment with at the time – despite the fact computers from the 80s could take about 12 hours to export an image.

Many flyers for Belgian parties with names such as Hardfloor, Save the Robots and Magic Mushroom Party used designs that played with consumer packaging conventions, mimicking the shape of flashy cleaning liquids, for example. Others seemed to take direct inspiration from the end of sci-fi camp, with primary-colored laser guns and cute, sturdy little robots.

“The many parodies of fashion brands may have poked fun at the advertising industry, but at the same time they also exploited this strong visual language for their own promotion,” Katarina Serelus writes in the book. “This, in turn, introduced an alternative form of collectivity to the market, which was experimented with through music, drugs and dance.”

The book does not shy away from the most problematic elements of the past of Belgian graphic design. De Bondt’s essay in Off the Grid deals with the Belgian colonization of the Congo between 1885 and 1960, and the graphic pieces that emerged around it.

Place posters such as those of Lucien de Roeck in the “tradition of maritime colonization propaganda on the port of Antwerp”, she writes, “you see that the drawing did not come out of nowhere. It is part of a series of posters of the same size and comparable composition… they show how graphic design, implicitly or explicitly, supported the enterprise of colonizing Belgium, giving it the visual and typographical tools necessary for accomplishment of its task.

Off the Grid is published by Occasional Papers; casualpapers.org