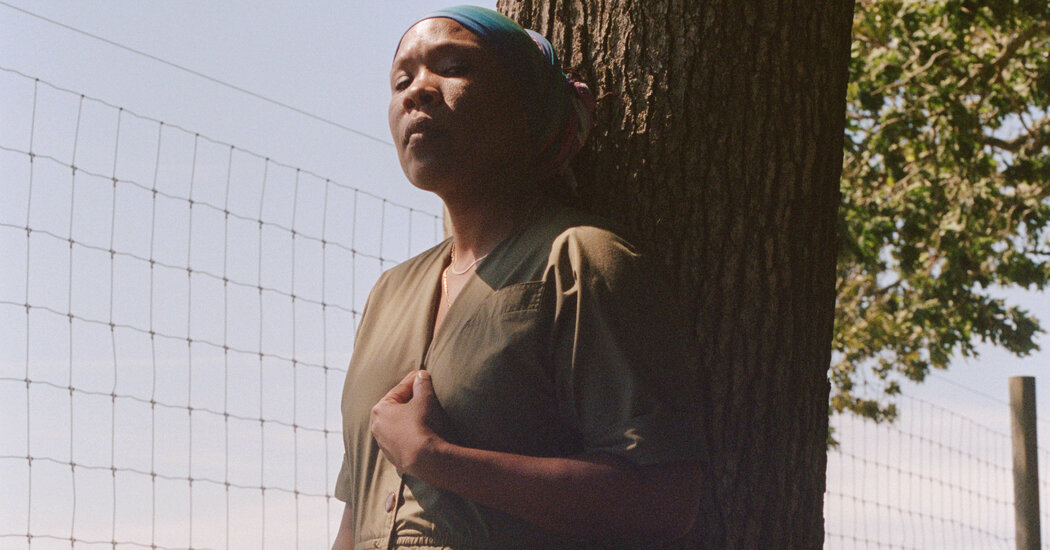 Tomashi Jackson harvests stories from the land of plenty

WATER MILL, NY – “What’s going on with communities of color there?” That was the first question Tomashi Jackson asked when the Parrish Art Museum invited her to partner on a project on the East End of Long Island.

While Jackson had been a guest of his New York gallery owner, the artist had no first-hand experience with the Hamptons, renowned for their beautiful landscape inspiring generations of artists and their exorbitantly priced second homes for rich and famous.

But when Corinne Erni, the curator of Parrish, started telling stories of immigrant arrests here and Latinos being pulled over in their cars for traffic violations that turned into ICE detention and family separations, Jackson said the wheels started spinning. On Sunday, “Tomashi Jackson: The Land Claim” will open at the Parrish with seven new canvases, an outdoor sound piece and an installation through the front window, informed by the artist’s interviews over the past 18 months with nine members of the Indigenous, Black and Latino communities living in the East End.

At the Watermill Center last month, where Jackson was finishing her suite of paintings for the Parrish, she explained how the idea came about.

Jackson, born in Houston in 1980 and raised in South Los Angeles, is known for delving into stories related to abuse of power, disenfranchisement and the displacement of people of color. For the Whitney Biennial in 2019, her curiosity led her to explore the history of Seneca Village, the once thriving black middle-class community whose lands were seized by the city through eminent domain during the creation from Central Park. His interest in the dangers faced by migrant workers driving in the East End became the entry point for the Parrish project.

“But you know what happens with research,” said the artist, a guest lecturer at Harvard, where she will have another exhibit, opening Sept. 20 at the Radcliffe Institute for Advanced Study, on the history of desegregation. school. “You walk into someone else’s garden with a few seedlings of questions, and there’s all kinds of other stuff going on.”

Jackson’s paintings synthesize the connections shared by local residents of color around experiences of transportation, housing, agriculture, and work. The works incorporate fragments of their personal family photographs amidst historical images and shifting color fields.

“In all of these communities that I listened to, the fact of the land was a common echo – investing in, harvesting crops, burying people, being moved,” Jackson said of the oral histories she distilled into stories. new paintings.

The title of the exhibition comes from conversations with Kelly Dennis, a member of the Shinnecock Nation and a lawyer involved in ongoing land disputes between the City of Southampton and the Shinnecock people, now reduced to a small reserve. The nearby Shinnecock Hills Golf Club was built on land that once belonged to Native Americans, and nation members say the golf course was carved into the tribe’s ancestral burial grounds. (In an email, club president Brett Pickett declined to comment.)

During Jackson’s interview with Donnamarie Barnes, archivist at Sylvester Manor Educational Farm on Shelter Island, a ferry ride away, the artist learned about the local descendants of slaves who were brought to the island by the Sylvester family, owners of sugar cane plantations in Barbados. , in the seventeenth century. Sylvester Manor was one of Long Island’s largest slave sites.

Richard Wingfield, a community liaison officer for the Southampton School District, recalled the extraordinary gardens on black-owned properties bought up by developers over time. The Parrish now sits in a field where his grandmother and aunts once worked as laborers picking potatoes.

“The whole story of this place started to emerge, like mountains rising out of the ground – something taking shape that was unseen and unheard of,” said Erni, the exhibit’s curator.

Before setting foot inside the Parrish, visitors will encounter the voices and stories of the nine interviewees projected from loudspeakers under the roof, in a soundscape produced in collaboration with composer Michael J. Schumacher.

Jackson’s paintings, which have been collected by the Whitney, the Guggenheim and the Museum of Fine Arts in Boston, layer archival imagery onto painted canvas with vivid hues and bold abstract geometry. Since her MA years at Yale, she has been heavily influenced by Josef Albers’ aesthetic theories on how we perceive color.

“His art is as much about abstraction as it is about racial politics,” Holland Cotter observed in his New York Times article about Jackson’s projects at the Whitney Biennale.

For “The Land Claim,” she began by constructing her canvases as if they were quilts, gluing together brown paper bags, Sag Harbor fabrics, vintage potato sacks, and painted shapes in saturated colors. She then superimposed the photographs of the residents in layers. She converts images into halftone lines and paints those lines into her occupied surfaces. Other images she prints on translucent vinyl strips that hang above the board, creating a cacophony of impressions.

In one painting, “Three Sisters,” the faces of matriarchs from three distinct communities and time periods intersect, emerge, and sink into the frame, with optical illusions created by the overlapping lines and colors. “They collide, they crumble, like sediments of history,” Jackson said.

Ashley James, associate curator at the Guggenheim, is intrigued by how Jackson adapts a concept Albers calls “vibrant borders,” about how adjacent saturated colors seem to interact, to how people of color are perceived in public spaces. “She refuses the idea that aesthetics can be separated from our political histories,” James said.

Jackson began in mural painting, working as an apprentice to Chicano muralist Juana Alicia for several years in California. Her interest in abstraction was sparked when she moved to New York in 2005 to attend Cooper Union. She was a student of the critic Dore Ashton, who witnessed firsthand the rise of Abstract Expressionism and brought her narrative to life for Jackson.

While walking around New York, Jackson was struck by the ubiquity of awnings and came up with the idea of ​​wrapping her paintings around canopy-style structures protruding from the walls (a technique she still uses in paintings). museum exhibits to recall public spaces). She hung strips of clear vinyl over her paintings after seeing the commonplace plastic flaps isolating the refrigerated areas of New York bodegas.

After graduating in 2010, Jackson studied at MIT School of Architecture and Planning. For her master’s thesis, she interviewed her mother, an engineer, about their family’s suppressed history as domestic workers. This established his approach to collecting oral histories.

“The research she does for each show could be a Ph.D. thesis,” said Connie Tilton, founder of the Tilton Gallery in New York. She met Jackson at Yale Open Studios in 2016 and gave him a solo gallery show that year. (Jackson is now also represented by the Night Gallery in Los Angeles.)

Jane Panetta, curator of the 2019 Whitney Biennale, pointed to the similarities between “The Land Claim” and the Biennale project, where Jackson merged images of the village of Seneca in the 1850s with contemporary press accounts making state of black-owned properties seized by the city during gentrification. Brooklyn neighborhoods.

“Like Central Park, the Hamptons is a very familiar, much-loved, and very polite space, but there are these buried, complex, and often ugly stories there,” Panetta said. She is also impressed with the artist’s use of aesthetic techniques to approach these stories in a way that is not overly didactic. “Albers gave her the idea that color is subjective, it can change depending on the context – it’s not a static thing,” she said.

Jackson’s impulse is always to expand the historical record through conversations. “I consider myself a portrait painter by nature,” she said, “looking closely at others and trying to capture some sort of essential humanity.”

Ilana Halperin puts the house in order (and the geologic stories)

Past and present stories exhibited at the Cultural Center