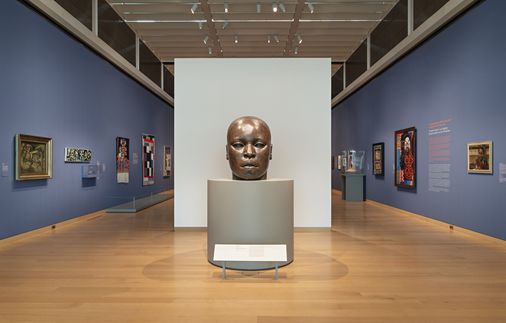 “Touching the Roots” and Connecting Cultural Stories to MFA

Wilson, born in Roxbury and rooted in Boston for most of his life, died in 2015 at age 92, and would never see the bronze enter the collection, which he did only this year. (His much taller offspring, the final 7-foot version, has graced the lawn of the National Center of Afro-American Artists in Roxbury since 1987; it was installed to mark 350 years of black presence in Boston.) And not just the track here, he is far from alone.

To its left and right is “Stories Artists Tell,” a reconfigured collection that explores long-neglected tangents across time, space, and discipline, moving away from the straight-line narrative that has dominated art. American art history for decades. Slip behind it and you’ll find “Touching Roots: Black Ancestral Legacies in the Americas,” a focused handheld exhibit tucked between the facility’s main channels.

The show features notes from “Stories Artists Tell”; he is formally agnostic, more interested in narrative connection than media or technique. But with his devotion to both Blackness and Boston, it’s the kind of spectacle Wilson, in his day, could only have dreamed of. “Touching Roots” helps reveal a parallel history of 20th-century American art and the museum itself. He weaves an aesthetic across oceans and eras, connecting the black diaspora to their African roots and acknowledging their struggle to make a whole.

There is an important precedent here. “Touching the Roots” is a distant echo of “Afro-American Artists: Boston and New York,” the reluctantly curated, mostly forgotten, and irrefutably groundbreaking exhibition of contemporary black art organized by the MFA in 1970. Pushed by the artist and activist Dana Chandler and hosted by Edmund Barry Gaither, the director of the fledgling NCAAA, the show was the flagship event of a burgeoning black art movement that flourished alongside the Black Power movement of its day.

“Touching Roots” transcends that era with works as recent as 2018. But it shares a unifying principle in its belief in the power of continuity and shared cultural history (exhibition notes include a tribute to Gaither, who was a consultant for the museum until 2020). With just 35 works, it’s a short lesson in the formative elements of 20th-century black American art and its aspirations – for heritage, for connection, and simply to be seen at all.

Several pieces fit the ethos of the Harlem Renaissance, the flourishing of black American culture after World War I that gave us artists and poets like Romare Bearden and Langston Hughes. As the movement evolved, a desire for roots set in. “The Legacy of Ancestral Arts,” Alain LeRoy Locke’s essay, urged black artists to build a black American culture based on their African heritage. His ideas underpin “Touching Roots” from generation to generation.

For me, an untitled watercolor by Aaron Douglas from 1930 sets the tone. With his monochromatic palette of icy blue-grey, Douglas works in silhouette to depict struggle and triumph. The pyramids in the background connect to the ancestral origins of blacks along the Nile; a figure rises in the light above the chained workers. A church steeple evokes divine providence — freedom as God’s will.

Loïs Mailou Jones, a Bostonian, has four pieces here, spanning almost 40 years of her career, which help to chart the path favored by Locke: the oldest, “Jeanne, Martinique”, 1938, is the portrait of a woman African woman who hosted literary salons in Paris, where Jones was then living, who helped connect a cohort of black Americans to those cultural roots; the last, “Ubi Girl from Tai Region”, 1973, seems to realize these early lessons with its paintings of West African motifs. Its main character, a woman with a face painted white, makes a crucial point about a culture that is very much alive, flourishing and struggling for its autonomy; in the 1960s and 1970s, black activists in the United States viewed African countries struggling for independence from their colonizers as analogous to the civil rights movement here.

The exhibition combs through the MFA archives in search of synergies, both material and cultural. Strip weaving, a West African tradition, infiltrated black American textile practice, notably in Gee’s Bend, Alabama, where artists such as Annie Mae Young has made patchwork quilts, like this one, that are loose, vibrant, and quintessentially American. Bearden’s moving ‘Family’, 1967-68, is a collage that adapts a strip weave from the Sahel region of Africa as a tribute to matriarchal culture. Allan Rohan Crite, another Bostonian, transposes the African matriarchal tradition to his home here in Boston with “Ancestor Figure, Bambara, Mali, Wood”, 1974, a drawing of a Malian sculpted figure of a mother and child paired featuring a black woman and her baby against the distinctive backdrop of Boston townhouses.

There are other strengths to dwell on, but for me, the key to “Touching Roots” is its roots, right here in Boston. The museum has let slip that moment in 1970 when, against its wishes, the MFA was, however briefly, the center of black American art. It’s far too late to seize this moment, with generations of black artists now stratospheric superstars out of reach.

But can the museum be a rallying point for black artists here in Boston? Stephen Hamilton, a young textile artist with a heroic impulse, gives me hope. His work here, from his “Founders Project,” is called “Dashawn Borden as Soundiata Keita,” from 2018, a stately portrait of a black man, wrapped in finery, on hand-woven fabric. The project is gracefully ennobling: Hamilton takes high school students from Boston and redefines them as the mythical founders of the African ethnic groups from which the diaspora descends. The project embodies Touching Roots’ best hope, with a chapter still unwritten: it imbues young people with deep roots and fills them with pride and possibilities from which to grow.