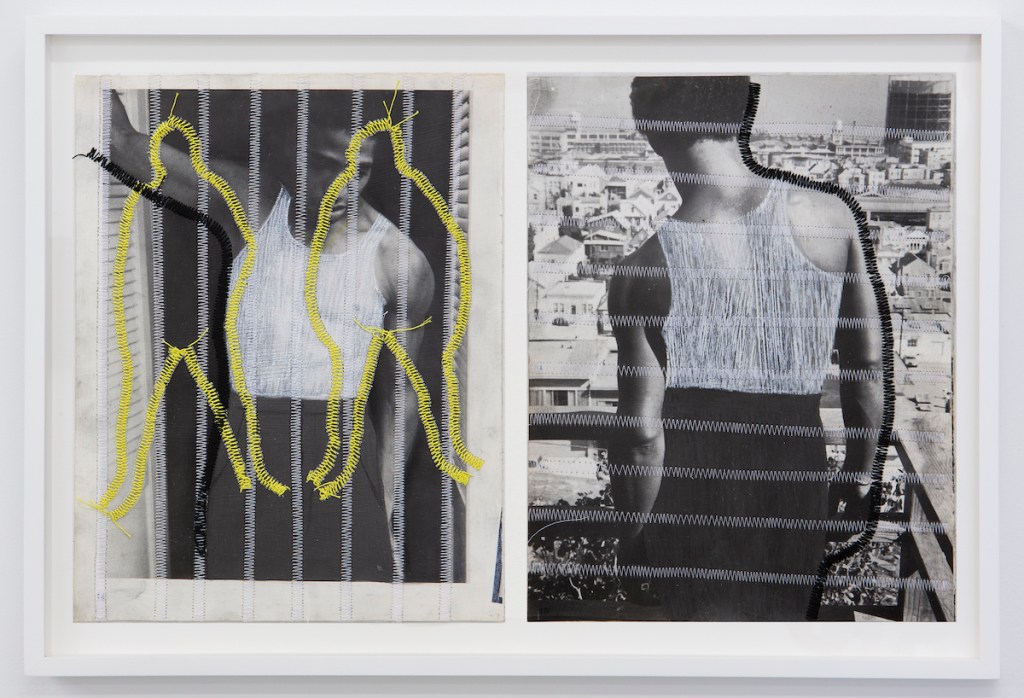 There is a long line of artists working with collage, although it can sometimes seem that all roads lead to the early experimentations of Cubist artists which were later refined by members of the Dada movement, who began to recycle and recombining materials in response to absurdity. of the First World War. “Revolted by the butchery of the 1914 World War, we in Zurich dedicated ourselves to the arts,” wrote Hans Arp. “While the cannons rumbled in the distance, we sang, painted, made collages and wrote poems with all our might.” Latent throughout was a kind of violence that was sort of a reflection of the carnage that surrounded these artists.

About a century later, artist Troy Montes-Michie began searching for a less violent form of collage, which could, in its own unusual way, be generative. He began to reflect on his childhood in El Paso, Texas, where he was born in 1985, and the real proximity of this border town to Mexico. “There was such an overlap with Mexico, and I always remember feeling that at a young age, that there was this division,” he said in a recent Zoom interview. “I could see Mexico, the river and the bridges. It’s literally right there, less than a mile away. As he matured as an artist, he began to think of a collage as a way to reflect this lived experience. “For me, the cut is not about violence, but more about reflecting on our own contours,” he continued.

The fruits of Montes-Michie’s experiments were memorably seen at the 2019 Whitney Biennial, in works such as Los Atravesados ​​/ The skin of the earth is seamless (2019), in which photographs of reclining men in striped clothing are cropped so that they appear cross-hatched, their images receding and emerging from the background. (Its title refers to Gloria Anzaldúa’s 1987 book Borderlands/La Fronteraa formative text for Montes-Michie.) Works from the same series as Los Atravesados are now included in the artist’s first major survey.

Titled “Rock of Eye,” the exhibit opens Wednesday at the California African American Museum, which curated it in collaboration with the Rivers Institute for Contemporary Art & Thought in New Orleans, where the New York-based artist was a research resident (albeit a virtual one, given the pandemic). The name of this exhibit refers to a tailoring term used to refer to when a garment is cut without careful measurement – ​​an apt name, given that Montes-Michie considers her own process to be “intuitive”.

“It wasn’t always like this,” he said, “but I think now that I’ve been in this medium for so long, I kind of know what needs to happen with my process.”

Many of Montes-Michie’s collages use images of black men found in magazines from bygone eras. In some of his early works, images of naked men that appear to be taken from pornographic publications were mixed and matched to a point where the human form borders on abstraction. These images were produced by photographers who “objectified men of color, bodies of color,” Montes-Michie said. In the hands of the artist, the characters in the images are made more complex by elisions and additions that make them double and seem slightly imperceptible.

By the time of the 2016 US presidential election, Montes-Michie’s methods began to change. In response to Donald Trump’s rhetoric, he began to think back to his own family history. He spoke to his stepfather, who claimed that the zoot suit – a high-waisted form of dress popularized primarily by African Americans, Mexican Americans, Filipino Americans and Native Americans Italian at the beginning of the 20th century – originated in Mexico. Puzzled by this misunderstanding, Montes-Michie delved into the archives to try to unravel the lineage of the zoot costume and discovered that it came from Harlem. “I didn’t know that was the first American costume,” Montes-Michie said. “I didn’t know it was worn by men of color, and also by women.”

His research confronted him with a long history of racism in the United States. In 1943, a series of riots began when a member of the Los Angeles City Council attempted to ban suits, allegedly in response to fabric shortages resulting from World War II. But the ban was implicitly, if not explicitly, racist, given that the zoot costume was considered by many to be a “badge of delinquency” for the groups that wore it, such as the Los Angeles Times written that year. White military men began attacking Mexican Americans and Filipino Americans in the streets, making national headlines in the process in what was dubbed the Zoot Suit Riots.

The resulting work Montes-Michie did on the zoot suits, now on display at CAAM, took him deep into the holdings of the New York Public Library and far beyond, and brought him into contact with the camouflage theory, on which the soldiers relied. blur the senses of enemies. “It’s supposed to cause confusion,” he said. “I sort of equated it to the confusion of white Americans watching these insiders who are just trying to create a new identity.”

Blending images that Montes-Michie found, he also began to rely on stitching techniques he learned himself. In some cases, fabrics are even affixed to the works. Stitches look like sutures that repair a healing wound. For example, in Untitled (Feeling Blue), a 2020 collage included in the CAAM show, two naked men’s bodies merge in such a way that one of their legs emerges from the back of the other. They are crossed by vertical lines of zigzag thread, its fibers neatly tied together, just like these two figures.

“I don’t view the Troy collages as sites of violence, even though they do charge historical violence. That’s not the job they do,” said Andrea Andersson, the founder of the Rivers Institute who organized the Montes-Michie survey with New Orleans space curator Jordan Amirkhani and Taylor. Renee Aldridge, curator at CAAM. “The work they do is also about building a relationship, and part of that is sometimes an entirely formal relationship – just pure beauty.”