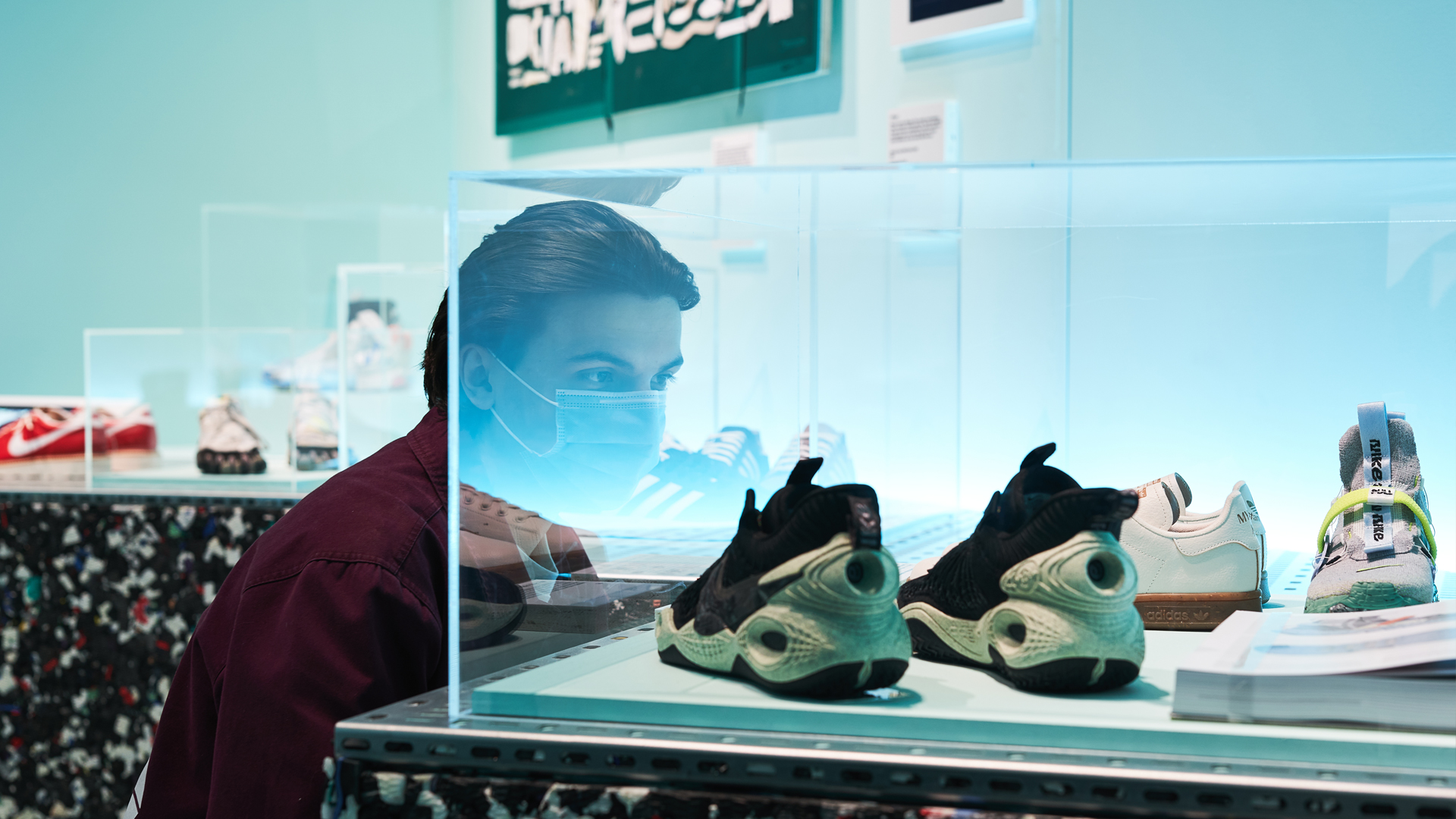 The Design Museum reopened with an exhibition on what it calls “one of the most universal design objects”: the sneaker. Sneakers Unboxed: From Studio to Street takes visitors on a journey from the 1970s New York basketball scene and London grime scene to the streetwear world of Tokyo through the lens of the ever-sporting shoe popular.

The show was designed with the aim of elevating the shoe to its cult status, according to InterestingProjects co-founder Joana Filipe. The studio has created three distinct spaces across the two sections of the exhibition, style and performance. â€œWe wanted to create three different spaces that highlight the cultural importance of sneakers in the global market,â€ explains Filipe.

The beginning of the exhibition intends to present the “basketball as a cult object”. The team therefore created a “blank canvas, a cathedral-shaped space” as a backdrop to the beginnings of basketball, says the designer. There are infographics – produced by the 2D designers of the Studio LP exhibition – on the countries that buy the most sneakers as well as a table explaining the technical term of the sector.

The next section explores how sneakers have been adopted by people in cities around the world since the 1970s, from Los Angeles and New York to London. â€œWe created these walls and billboards to refer to the streets and brands that started associating sneakers with personalities from sports to the music industry,â€ says Filipe. One of those ties is Nike’s Air Max model (known as the 110s), which was immortalized on the cover of Dizzee’s debut album Rascal Boy in Da Corner in 2003. Dark gray tones and similar surfaces to cement also aim to “evoke an idea of â€‹â€‹an urban landscape”, adds Filipe.

The second half of the exhibit examines how designers worked to improve technical performance, from Chuck Taylor’s basketball clinics for Converse to Puma’s self-lacing model. Filipe says it’s a â€œbehind-the-scenesâ€ look at the sneakers, with details inspired by lab and factory settings. The design team used metal trays for the displays that “evoke this production line of various technological developments,” explains Filipe. The studio also installed “lab islands to explore every technological advance” that incorporate displays, sketches and samples.

A final room – which the designer calls a â€œgreen room of possibilitiesâ€ – covers the burgeoning environmental movement. The centerpiece of the piece is a 3D knitting robot from Adidas that aims to reduce waste and repair sneaker patterns. With green lights and minimal storefronts, this area is a â€œclean slate on the role of sustainability in the sneaker industry,â€ says Filipe.

Designed to explore the “different stories behind this iconic object”

One of the challenges of designing the exhibition was how to â€œdisplay a small object like a basketball in a room five meters high without the object getting lost,â€ says Filipe. Keen to avoid â€œendless MDF display plinths,â€ the studio used Perspex cases that make it easy and durable to display the sneakers. According to Filipe, 85% of the Perspex cases on display were reused from the museum’s existing stock. InterestingProjects also tried to keep the structure as light and modular as possible in case the exhibition visits.

These cases also convey trends in the world of sneakers. In the latter part of the style section, a floor-to-ceiling display base marks the emergence of sneaker culture in Tokyo in the 1990s. Showcasing prominent collaborations between Kanye West and designer Tyler, this section More “fashion-oriented” marks a “shift in sneaker culture,” says Filipe.

The team were also inspired by how the exhibition reveals the â€œdifferent stories behind this iconic object,â€ says Filipe. â€œWe felt that the design should reflect this idea of â€‹â€‹this assemblage of stories. Cement-like colors and baseboards are used to show the origins of sneakers on the street, says the designer. The walls and tables appear in a “raw form” which aims to show how “these stories come together”, she adds.

The studio took care to use materials related to the sports industry and sneakers, explains Filipe. These include nets (used as barriers), LED panels suspended by cotton ropes as a nod to sneaker laces and recycled gray rubber reminiscent of indoor gyms. Foam rubber cushions – often used for outdoor pitches – have also been incorporated.

Unveiling of the “sneaker production process”

Studio LP was commissioned to create the exhibition visuals, infographics, wall signage and timeline graphics on the exterior walls of the gallery. Studio co-founder Lauren Chalmers said that process began with a thorough examination of “the aesthetics surrounding sneaker advertising and the broader sneaker culture.”

While admitting that there is no “particular language” for sneaker culture, Chalmers explains that inspiration came from the content of the exhibit – from fashion and street culture to the graphics of sport and performance. For the fonts in the show, the studio used both Pangram Pangram Foundry’s thick sans-serif condensed formula (often seen in streetwear campaigns) and a bespoke, in-house-designed monospace font.

The former is used on a large scale, which hopes “to make the most of the high ceilings and narrow spaces,” Chalmers explains. The custom font was inspired by the thermal printing used on warehouse packaging. It was designed to tie into the â€œbehind the scenesâ€ element of the show – highlighting how it â€œfinds out what’s going on in the construction and design of sneakers,â€ Chalmers adds.

The infographics were designed with a similar mindset, she explains. They aim to convey the â€œprocess behind the production of sneakers,â€ using grids and shapes described to present â€œthe idea of â€‹â€‹patterns, fabric and construction,â€ Chalmers explains. The section titles were inspired by markings found on athletics tracks and sports halls. The color scheme was taken from the 3D materials, the designer explains, and there are a number of durable elements, including the exhibition labels which are made from 100% recycled plastics.

Sneakers Unboxed: Studio to Street runs from May 18 to October 24 at the design museum. Tickets start at Â£ 6 and more information can be found at the museum website.

He gave the Morris Museum art, sound and movement. Now he is moving forward.