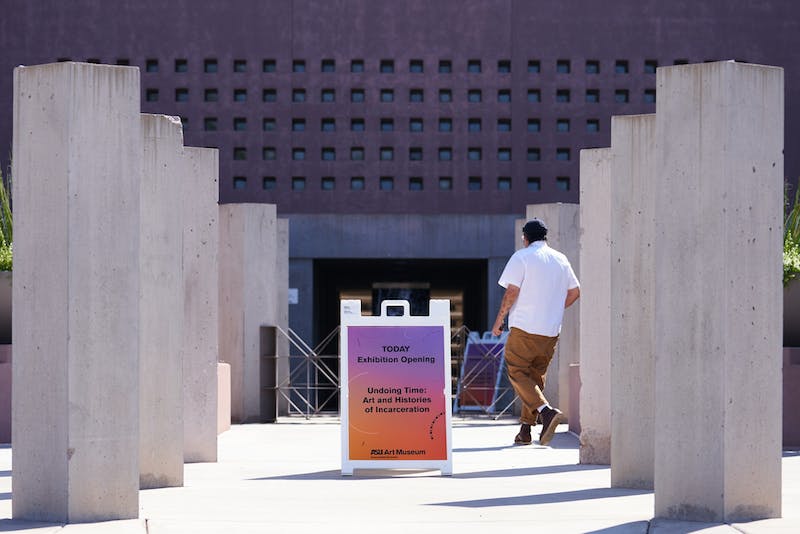 “Undoing Time: Art and Histories of Incarceration” opens after years of work

A man walks towards the entrance to the ASU Art Museum on the Tempe Campus on Friday, September 10, 2021.

The ASU Art Museum opened his “Undoing Time: The Art and Stories of IncarcerationÂ»Exhibition on September 10, after years of preparation.

â€œThe subject we’re dealing with, I think, really needed that amount of space to kind of tell the story and its essence,â€ Cesar Morales said.

The exhibition was created thanks to a grant from the Art for Justice Fund for which the museum had been invited to apply.

The ASU Art Museum is the first to receive this grant, and to date only two other museums hold it.

The exhibition is a collection of unpublished works by 12 artists.

I can’t wait to attend this exhibition. thank you so much @KNEW to address this very important issue in our society. I am so proud to be a Sun Devil! Thank you! https://t.co/CeNUFKoPG5

â€œThe idea was to kind of work with artists who work with history as part of their practices and their media,â€ said Villar Miranda. â€œOften, they use archives or reappropriate images from the past in their present works. “

The exhibit focuses on mass incarceration and the idea of â€‹â€‹’new stories’ or, as Garcia explained, the ‘voices and stories of people who have not been seen, portrayed or heard’.

In this exhibit, these new stories are those of those who have experienced the poor conditions of mass incarceration and communities that have been continually marginalized or victimized by the prison system.

While the exhibit primarily deals with the American prison system, the museum brings an international perspective with installations by Juan Brenner, who lives and works in Guatemala and focuses on the local impact of incarceration, and Stephanie Syjuco, whose work refers to the history of colonialism and incarceration in the Philippines.

Among those incarcerated in Arizona, the figures stand out. According to a report from the Vera Institute of Justice, in 2015, more than 55,000 people were in Arizona jails and jails, while the state’s total population was just over 6.8 million.

Iniquity goes further, the Latin, indigenous or black peoples constituting about 49% of Arizonans in prison in 2015, although these communities represent only about 40% of the total population.

“These are the communities that we believe are probably the most affected by the content of the show,” said Villar Miranda. “And so a lot of artists work with Latinx stories, black stories, native aesthetics.”

Throughout the exhibition, some pieces stand out more than others. One of those pieces was “Personal, Small, Medium, Large, Family” by Mario Ybarra Jr., which was inspired by a pizzeria.

â€œPersonal, Small, Medium, Large, Familyâ€ also explores the impact on loved ones. The artist was inspired by his personal experience. As a teenager, he must have seen one of his dearest friends, Richard, enter the prison system.

“(The incarceration) really affects the personal relationships of these people, the little radiating circles,” said Ybarra Jr. He said that the communities that inmates are taken from and those they create in prison create these middle circles and big.

Ybarra designed the installation after a restaurant where he would eat with Richard. There was also a video element, Ybarra’s interview with a recently paroled Richard.

Ybarra Jr. researched exhibits that would feature this installation; although these efforts “never failed”, they came to fruition when contacted by the ASU Art Museum.

“Looking back, I’m glad now is not the right time because my friend Richard would not have been released from prison and could not have participated in the same way.”

“Multi-ples Capas (Multiple Layers)” by Carolina Aranibar-Fernandes can be found in Galerie Five.

“Multi-ples Capas” is an interactive multimedia installation featuring hanging planters filled with plants believed to have healing properties suspended from an adobe tile floor, which crumbles over time.

“The article deals with the different forms of incarceration, but also with all the companies that have been involved historically, in a contemporary way, in benefiting from the prison system,” said Aranibar-Fernandes. The tiles bear the names of companies involved in the prison system.

The public can also attend upcoming programming at the show, Garcia said. â€œWe have a really strong set of programs that we hope to involve a lot of people, people who may not be interested in art per se, but have a real interest in it. “

Continue to support student journalism and donate to The State Press today.