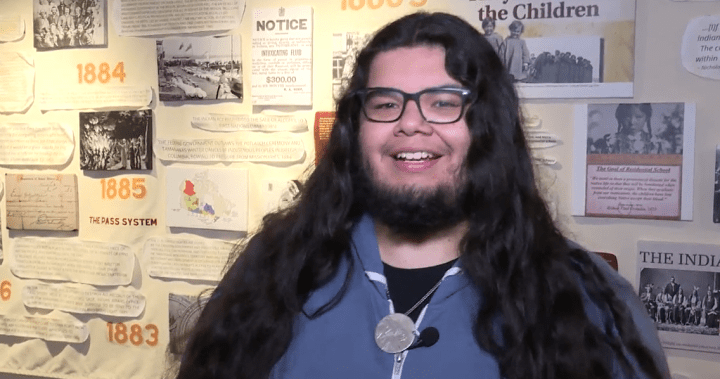 ‘Unlike Learning Other Stories’: Stz’uminus Youth Collaborate on New Exhibit in British Columbia – BC

Isaiah Harris invites British Columbians to join him on a journey through time.

The 20-year-old Stz’uminus First Nation storyteller is one of many contributors to a new multimedia exhibit at the Cowichan Community Center that delves into more than 150 years of colonial history.

“Learning this story is different from learning other stories,” Harris explained.

“Every place in the world has its own unique story to tell, but in the case of Vancouver Island, colonization … happened not even that long ago. We are talking about 150, 200 years ago.

Paid day off to reflect on truth and reconciliation? There’s a way to donate those winnings

The exhibition is called Game-It, which means “truth”, and its posters are accompanied by the phrase: “Reconciliation, the journey of our generation”. Visitors have the choice of free admission or an immersive three-hour guided session.

The exhibit is told from the perspective of Quw’utsu’n elders and presented by Social Planning Cowichan and the Quw’utsun’ Cultural Connections Society. Harris said it was a “great opportunity” to learn about the history of the lands they occupy.

“Not many people here even know that story,” he told Global News. “I wish growing up I would have known a bit more about the history of our local First Nations and our history here on Vancouver Island.”

4:29
Young Indigenous leaders raise their voices on National Day for Truth and Reconciliation

Harris has been fascinated by history for many years. He said he grew up hearing the oral and creation histories of his nation, but was also enchanted by European medieval history as a teenager.

He learned about West Coast historical figures in a land and language class at Ladysmith High School, he added, and as an adult he decided that he had a role to play in sharing these stories.

“Learning more about the history of Vancouver Island made me really excited to focus on Indigenous storytelling,” he explained.

“I really hope people will also be drawn to these stories because they find them so fascinating.”

Intergenerational survivors on healing through the power of powwows

Harris is now involved in the film world and was interviewed in the documentary film Orca Cove Media Tzouhalem, which examines the life of Cowichan Chief Tzouhalem. He also narrated the film, directed by Leslie Bland and Harold Joe, and screened in March.

“Thanks to this crazy course of events, I was able to be part of the Tzouhalem documentary, the story that I knew so well and was so excited about,” Harris said.

“I’ve absorbed as much of the projects I’ve been involved in as much as possible because I feel like if I was a little younger I could have really benefited from learning more about Indigenous filmmakers, but there’s no There was no opportunity for me to learn these things.

“Step into this world has done a lot for me as a storyteller and just gives me the confidence to know there is a place for Indigenous stories.”

The public can visit the Game-It exhibition from now until October 6th. The exhibition opened on September 6.