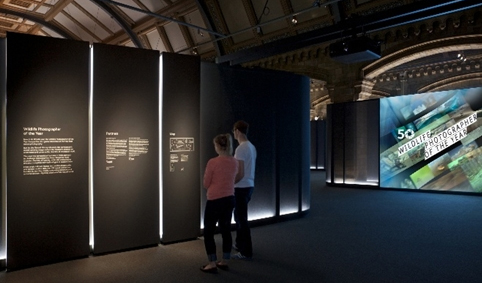 This year, the ‘lightbox’ concept of the exhibition has been expanded and there is a new interpretive design using a ‘continuous ribbon’. The exhibition itself features several new interactive elements.

The designers won a joint, invitation-only submission in March for a concept, which included plans for the museum’s South Kensington site as well as international and traveling versions of the exhibit.

Gabrielle Underwood worked on spatial design and art direction, with A Plus B on graphic design and digital experience.

Each photograph in the exhibition is backlit by a vertical light box, integrated into temporary walls.

The winning photographs form a central structure, which sits higher than the other photographs and shines brighter.

Radiating from this, a ribbon of lit fabric weaves in and out of other photographs, which are grouped by theme.

Gabrielle Underwood says: “The idea was to have a warm and bright central area showing the winners in the middle, with themed areas flowing from that.

There is a “preferred or suggested route”, says Underwood, but since there will be thousands of people visiting and some sections will be busier than others, visitors can pass through openings in the ribbon and enter and emerge from the central glowing orb, which is visible from most points.

Information about the photographs, including where and when they were taken, is written on a graphic panel below each image.

There’s also a cinema room and an interactive touchscreen, which gives visitors access to an archive of previous winners as well as ‘The People’s Choice’ – those photographs that the public have preferred but haven’t is one of the 100 finals exhibited.

An application has been developed for use in the exhibition. If a visitor finds a large crowd around an image, they can type in a code on their phone, which unlocks the information in the photo

There are seating areas to encourage visitors to step away from the crowds and check out this information.

Underwood says: “Over the past few years the show has developed a strong brand and to celebrate the 50th competition we wanted to evolve that design identity and reinvigorate the visitor experience.

“The spatial and graphic design creates a fluid ribbon on which the photographs are presented – a pattern that ripples through the digital platform, to create a seamless physical-digital experience.”

The Wildlife Photographer of the Year exhibition is presented at the Natural History Museum until August 2015.